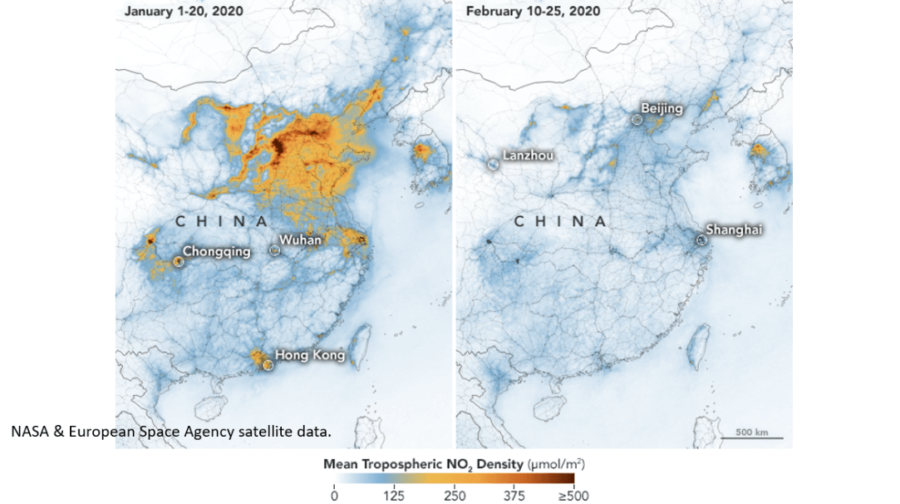 Photo courtesy of Nasa. This photo depicts the decreases in nitrogen dioxide over China. There is evidence that the change is at least partly related to the economic slowdown following the outbreak of Covid-19.

By Nina Mendes
Beat Reporter
Rumors and misinformation run rampant on social media daily, but in times of global crisis, more people are believing and spreading misinformation.
Since the stay-at-home order has been enforced on a worldwide scale, users began to share stories of the positive environmental outcomes emerging from the Coronavirus pandemic.
While there have undoubtedly been positive environmental effects, some of the seemingly innocuous claims have proven to be blatantly false.
One popular post to emerge during this time claimed to have caught dolphins swimming in the clear waters of the Venice Canals.
This would be incredible –  if it were true.
The post was debunked by media outlets proving the footage shot was from Sardinia, not Venice.
Dr. Michael Savarese is a professor and Program Coordinator in the Dept. of Marine & Earth Science at FGCU.
“The claims about wildlife coming back and water turbidity mysteriously clearing up are all completely unfounded,” Savarese said. “It may be that positive things have happened, but nobody has approached it scientifically. There is a lot of hopeful, misinformed news out there.”
Savarese went on to explain that a possible explanation for the sudden water clarity is the absence of gondolas stirring up the sediment. He said the dolphins may have always been there, but tourists were just never able to see them.
Another report of wildlife reappearing was a Twitter post claiming the lack of human activity attracted a group of elephants into a village in Yunan province, China. The elephants supposedly drank 30kg of corn wine, got drunk and fell asleep in a neighboring tea garden. Pictures of the elephants accompanied the post.
According to a National Geographic article by Natasha Daly, it is unsure where the photos of the drunken elephants originated from. Daly also uncovered that elephant sightings in Yunan province are not uncommon.
“The phenomenon highlights how quickly eye-popping, too-good-to-be-true rumors can spread in times of crisis,” Daly wrote in the article. “People are compelled to share posts that make them emotional. When we’re feeling stressed, joyous animal footage can be an irresistible salve.”
With stories like these circulating in the news feed, it can be challenging to know what to believe.
Here are some points from a study conducted by Nasa.
The air quality in highly polluted areas across the globe has improved drastically.
“There are real changes in atmospheric pollution, but the question is if they can be perpetuated or if they are just temporary effects,” Savarese said. “If the planet goes back to its carbon use practices when this is over it’s just going to be an imperceptible blip in the data as we move forward in time.”
In China, for example, the study reported the nitrogen dioxide density (an air pollutant) in Beijing and Shanghai had decreased significantly from January to February. This is about the same time as their industrial shutdown.
Nitrogen dioxide is short lived in the atmosphere, which explains why the satellite data shows the pollutant coming out of the air rather quickly.
However, carbon dioxide is a greenhouse gas with much longer residence time and a direct link to global warming.
Savarese said that although we are putting less carbon dioxide into the atmosphere during quarantine, it would take a longer period to see a shift in dropping that value.
The importance is to stress that these atmospheric improvements appear to be only temporary.
Once the stay-at-home order is lifted, the nitrogen dioxide and carbon dioxide levels will increase when people revert to their normal lifestyles.
Conspiracy theories have also emerged around the outbreak of the Coronavirus. Some people have turned to social media to share their interpretations of the pandemic.
Micki LeCronier created the Environmental Activists of SWFL Facebook group in 2014 to raise awareness of Florida’s fragile ecosystem and protect it from corporate greed.
She manages the page and has almost 1,000 followers from the local community supporting the cause.
“Could the universe hit us with a more apocalyptic warning?” LeCronier said. “Nature is taking this time to try to heal herself. Humans are in their homes with their cars in garages and not spewing fossil fuels into the environment. I believe COVID-19 will make us more careful because we don’t want to get sick.”
LeCronier moved from Michigan to SWFL back in 2004 to help manage her chronic Lyme Disease. She became involved in local activism after learning about the pollution in Lake Okeechobee and the toxins in drinking water.
Savarese is glad to see attention drawn to environmental change during this time but is fearful that people will have greater concerns, like the economy, and not focus on these problems once life resumes to normal.
“The repercussions when [the quarantine is] over are going to be a long crawl out of a deep pit,” Savarese said. “The whole focus on the environment, specifically on climate, is going to be tabled for another five years. The planet doesn’t have that much time to play with.”