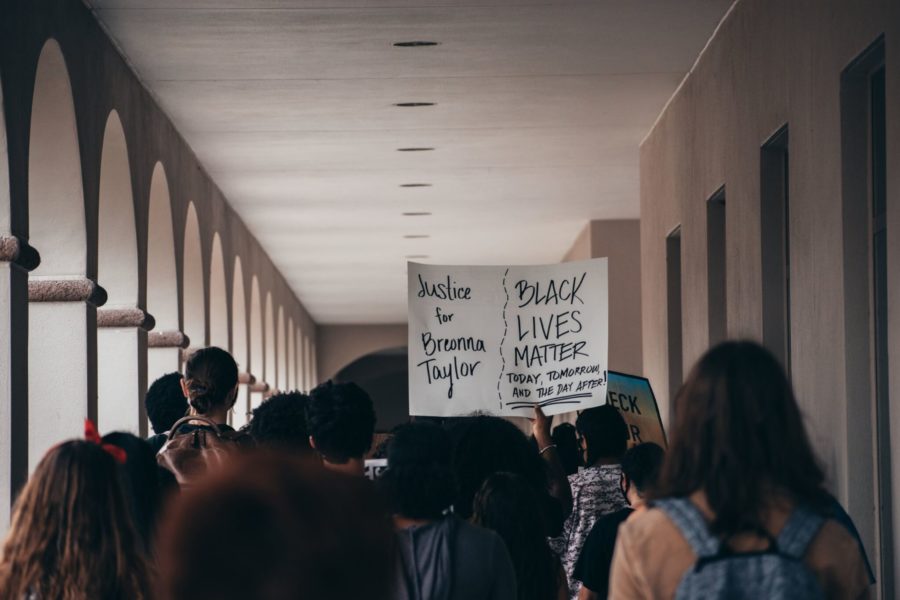 By Sabrina Salovitz
Assistant Editor
It was a sunny October afternoon on campus at Florida Gulf Coast University. A ring of students gathered near the bus loop, surrounding Nadjuska Maurice.
Maurice, a junior at FGCU, is dark-skinned, with a fall of long braids down her back. She held a small megaphone in her hand and was flanked by two friends. She had tears streaming down her face, but her voice rang clear.
“We matter. We are not nothing,” Maurice said. “They come in the middle of the night! What sort of justice is that?”
Maurice is alluding to the circumstances of Breonna Taylor’s death. Taylor, a 26-year-old Black woman, was fatally shot by police officers in her Louisville, Kentucky apartment.
It was after midnight when officers approached her home. They began by knocking on the door and calling out. According to an article by The New York Times, after waiting with no response from inside, the officers used a battering ram to break the door off its hinges.
Taylor and her boyfriend Kenneth Walker had been startled from bed, and Walker had grabbed his legally registered firearm before approaching the door, according to ABC News.
Walker fired a warning shot at the officers, who he believed were intruders. He hit Sgt. Jonathan Mattingly in the leg. Mattingly and detectives Brett Hankison and Myles Cosgrove fired 32 gunshots in return. According to an article by AP News, Six of those bullets fatally struck Breonna Taylor, who would later be pronounced dead at the scene.
FGCU’s Coalition for Racial Justice organized their event amid outrage over the jury decision in Taylor’s case.
For months following Taylor’s death, her family pleaded for justice and pushed for criminal charges against the officers. The family will be receiving a $12 million payout, but none of the officers involved in her death were charged.
“After the outcome of the Breonna Taylor case, we saw the public outcry,” Breanna Bland, an event organizer, said. “And we wanted to show that we were in solidarity with the people of Lewisville and to show that we’re not done: no justice, no peace.”
Bland spoke at the event, condemning the country’s slow development in terms of race issues and asking those present to cast their votes in November. Voting was a common theme among the speakers.
“You have so much more power than you know,” Delphine Gras, an Associate Professor at FGCU who spoke at the event, said. “Growing up, I didn’t believe that voting makes a difference because I felt like it was rigged, or it was hopeless, but it can make a difference.”
The event will be the first of many, according to Bland, who promises to continue speaking out. Bland said that she expects action from leaders and will continue to demand change until she sees it.
“I’m not going to stop marching,” said Bland. “Because they need to see me, they need to hear me.”