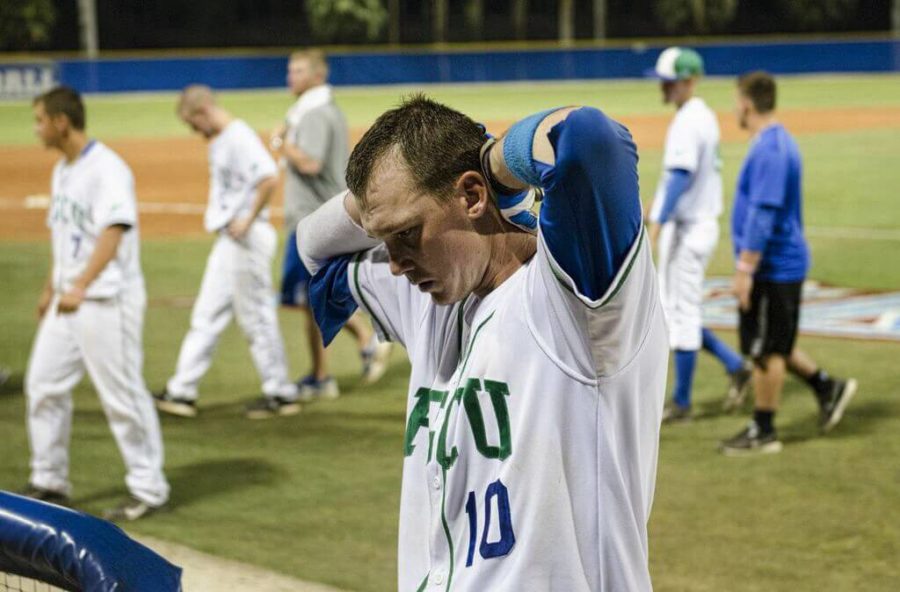 The Florida Gulf Coast University baseball team dropped an early lead over Lipscomb in the second round of the 2014 Atlantic Sun Baseball Championship on Thursday night, falling 5-4. FGCU squares off with Jacksonville on Friday, May 23 at 7 p.m. The Eagles must win against the JU Dolphins or will be eliminated from the tournament. Should the Eagles advance past JU, they would have to hand Lipscomb two losses on Saturday to advance to the Championship game on Sunday.
Brady Anderson pitched through his 7.2 innings, allowing eight hits and striking out three against just one walk. It was after that second out of the eighth that Anderson ran into some trouble and gave up three runs before Nick Deckert came in as relief.
Nick Rivera was the only FGCU hitter to register multiple hits, including a two-RBI double in the first that scored the game’sfirst runs. He would also score twice. Andrew Valencia collected the only other RBI with a fly in the eighth.
“This game was a very uncharacteristic of us,” head coach DaveTollett said in a previous statement. “It’s a tough situation we’re in now. We are going to have to have some help from our pitching but we are also going to need to hit better than we did tonight.”
Jake Noll saw his 18-game hit streak end on Thursday night. Heled off the game with a walk for the Eagles and was followed by Colton Bottomley who walked as well. With the runners on second and third with one out following a passed ball, Rivera doubled down the left-field line to drive in the first two runs of the ball game and give FGCU a 2-0 lead. Two batters later in a first and third situation now a second passed ball would allow Rivera to score and give the Eagles an early 3-0 lead.
Anderson didn’t run into trouble against Lipscomb until the fourth inning. Drew Adams singled up the middle and Tyson Ashcraft followed suit with a hard-hit ball back through the middle as well to put runners on first and third with nobody out. Anderson picked up a big strikeout for the first out of the frame but gave up a sacrifice fly for the second allowing the runner to score from third, putting Lipscomb on the board.
The Eagles had the bases loaded in the fifth but were unable to push a run across. An FGCU error resulted in a run in the top of the sixth and Nick Andros got rolling from there despite the 3-2 deficit. Hunter Brothers struggled on the mound for Lipscomb, walking six batters over four innings. Andros showed the complete opposite as the southpaw struck out eight batters over five innings to secure the victory for the Bisons.
Lipscomb picked up three runs off Anderson in the eighth, turning things over to the FGCU lineup in the bottom half with a 5-3 deficit to work with. Rivera led off the bottom of the eighth with a single through the left side and Zack Tillery followed with a walk. A bunt moved both runners into scoring position for the senior catcher Valencia who lifted a sac fly to right to make it 5-4. That was all the Eagles would get in the eight.
Deckert kept the Bisons at bay in the ninth and in the bottom half, Alex Diaz led off with a bunt single and Noll sacrificed Diaz to second but that was as far as he would go. Andros was able to avoid further incident to secure the 5-4 victory. FGCU has lost three of the last four meetings with the Bisons.