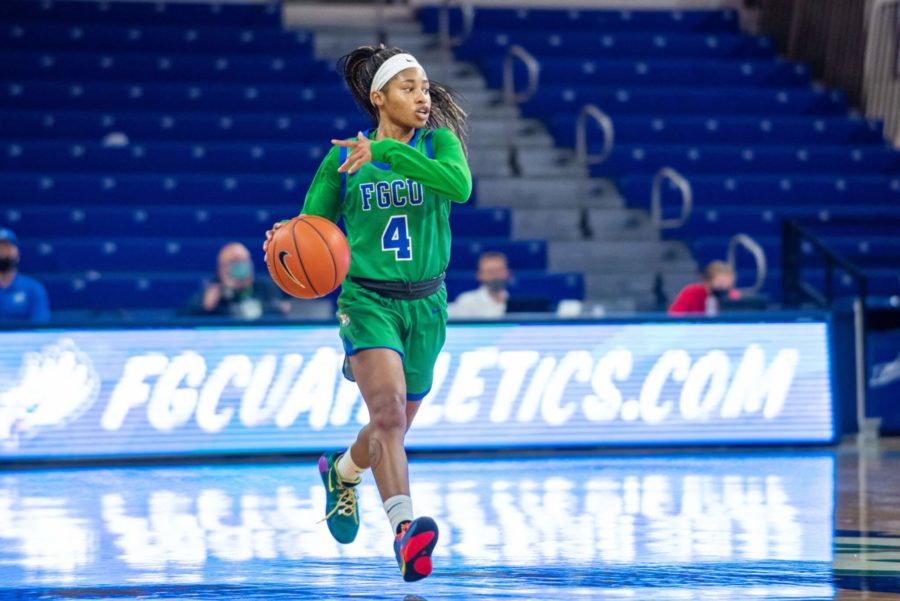 By Jake Henning
Sports Editor
The FGCU women’s basketball team came out of the weekend with a 1-2 record, picking up their lone win against Davidson on the last day of the tournament. They lost games to No.24 Missouri State and No.14 Arkansas.
The first game came and went quickly for the Eagles, as they dropped a heartbreaker to Missouri State, 74-49. This was the first ever meeting between the two squads, which took place in Alico Arena.
Not much went right for the Green and Blue, as their highest scorer of the game was junior guard Tishara Morehouse with 10 points. Morehouse made her debut with the women’s team this game, after just transferring from Western Nebraska C.C.
“We didn’t play well,” FGCU head coach Karl Smesko said. “We have a lot of room for improvement. We just need a positive mindset and a desire to get better.”
The Eagles shot 23 percent from the field and an even worse 13 percent from the three point line.
FGCU’s next game was a more competitive matchup, but the Eagles couldn’t quite pull it out as they lost a close one to Arkansas, 86-80.
Transfer Tishara Morehouse showed out in her best performance of the year, pouring in a game-high 35 points. She shot an incredible 70 percent from the field and made three of her eight attempted three-point shots.
FGCU had kept a close lead for the whole game, until Arkansas went on a 10-2 run to take the lead with 8:08 remaining in the fourth quarter. This came just after Tishara Morehouse and Andrea Cecil had exited the game with injuries they sustained in the beginning of the fourth.
The Razorbacks used that 10-2 run to fuel a comeback in which they outscored FGCU 26-14 in the final quarter of the game.
“It’s definitely a better effort,” FGCU head coach Karl Smesko. “We played a top 15 team in the nation, and we had a chance to win it at the end. We just came up a little short in the end.”
The Eagles last game of the tournament was a great way to end the weekend, beating Davidson by a score of 84-61.
The big headline on the day was the highly anticipated debut of FGCU forward Kierstan Bell. She was a three-time Ms.Basketball in the state of Ohio, the only other player to three-peat in the state being Los Angeles Lakers star Lebron James.
Bell had just been granted eligibility from the NCAA after transferring from Ohio State, where she was an Honorable Mention All-Big Ten and on the Big Ten All-Freshman Team.
Lets just say that she lived up to the hype, as she totaled 24 points, 20 rebounds, three blocks, three assists and two steals over 29 minutes. A performance that FGCU fans had been anxious to see from her.
“One thing about Kierstan is, obviously she’s an extraordinary athlete, but her basketball IQ and understanding of the game is really off the charts,” FGCU head coach Karl Smesko said. “Her potential is amazing because she picks up things so quickly and is such a good learner.
Bell wasn’t the only FGCU player that got going, as Tishara Morehouse (19 points), Alyssa Blair (15 points), Andrea Cecil (12 points), and Emma List (11 points, 10 assists) all scored in double figures for the Eagles.
“I thought it was an excellent game,” Smesko said. “We played a really good team. We had a lot of energy at the start of the game.
FGCU’s next game will come when they are back at Alico Arena to play Temple on Sunday, Dec. 6 at 2 p.m.