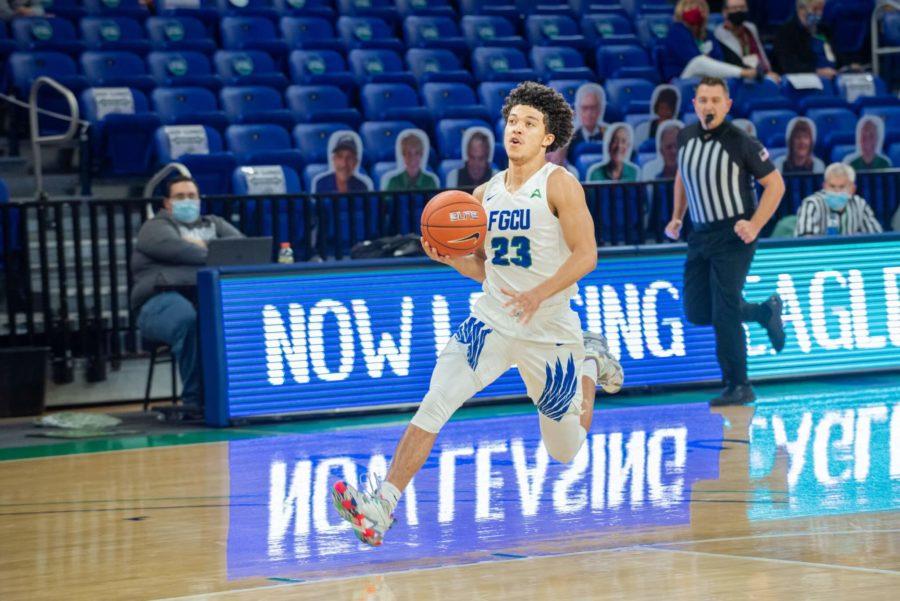 By Jake Henning
Sports Editor
The Eagles pulled out a huge win against Webber International, a score of 112-39, which was the program’s fifth-highest scoring game in their history.
A multitude of FGCU players reached a career high in points, most notably was guard Dom London. He poured in 22 points, shooting 9-15 from the field. Cyrus Largie was also a huge presence on the floor tonight, dropping a career-best 14 points.
Transfer guard Franco Miller Jr. had his best game of the season, a double-double that consisted of 12 points and 10 rebounds. This was Miller’s highest scoring game of the year for FGCU.
A trio of players for FGCU got their first points of their careers on the night, as Zach Anderson, Chance Jackson, and Lenny Ricca all got on the box score.
FGCU got out to a commanding lead in the first half, fueled by some energetic dunks from Justus Rainwater, Dakota Rivers and Eli Abaev. The Eagles held the Warriors to 27 percent shooting from the field and a game-low 22 percent from three.
Defense became a staple of the game for the Green and Blue, which they lacked in the previous matchup against FIU. Dakota Rivers led that front, with a career-high six blocks on the night.
Rivers surpassed former Eagle Marc-Eddy Norelia and is now tied with former teammate Brian Thomas for seventh all-time in career blocks (50). This was also the third-most in a game in FGCU program history.
FGCU’s next game will be back at Alico Arena on Tuesday, Dec. 22, where they will take on Georgia Southern for their final game before conference play. The game starts at 7 p.m.