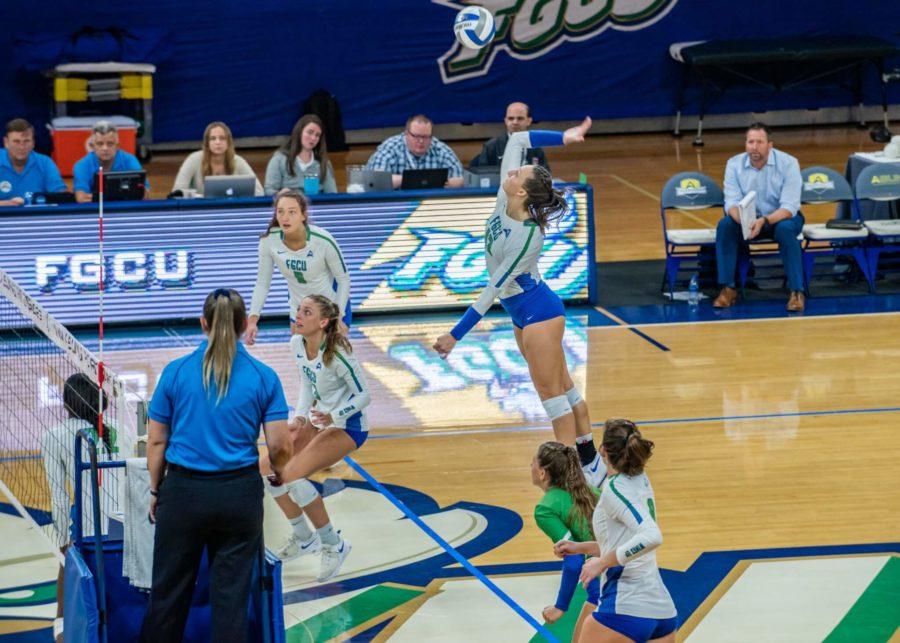 By Jake Henning
Sports Editor
FGCU Volleyball had four of their players recognized this week, with three of them taking ASUN awards for the conference. Cortney VanLiew notched her second-consecutive preseason player of the year award, while Dana Axner grabbed defensive player of the year, and Chelsey Lockey rounded it out with setter of the year.
All three of them went on to make the ASUN’s seven-member preseason all-conference team, with the addition of Erin Shomaker. Shomaker had herself a very impressive freshman year, and one that had her winning ASUN Freshman of the Year, as well as making the ASUN All-Freshman Team. She racked up 233 kills, which was second on the team only behind VanLiew.
VanLiew went on to have another astounding year for the Eagles, where she dropped a team-leading 423 kills for the season. She also went on to win numerous awards, some of which included AVCA Honorable Mention All-Southeast Region, ASUN Player of the Year, and First Team All-ASUN.
Dana Axner was another bright spot for the Eagles, as she followed up her amazing freshman season with an even more impressive sophomore year. Her 574 digs was first on the team and double that of the next player on the team (Amanda Carroll, 245). Along with winning ASUN Defensive Player of the Year, she won a plethora of awards, AVCA First Team All-Southeast Region, First Team All-ASUN, ASUN All-Tournament Team and many more.
Another player that is extremely important to FGCU’s success is Chelsea Lockey, who is third in assists in program history behind Maggie Rick (4,540) and Gigi Meyer (4,408) with 1,690 career assists. Last year, Lockey put up an incredible 1,214 assists, which was third in the ASUN conference. She took home two awards last season, which included Second Team All-ASUN and she was on the Sunshine State All-Classic Team.
“I’m happy to see our players being recognized in the preseason voting, and I am proud of all that they have done in working to put themselves in those positions,” FGCU head coach Matt Botsford said. “To sweep the major awards is really humbling considering the talent that exists throughout the ASUN and a testament to the reputations and standards that Chelsey, Cortney and Dana have set relative to their roles on the court.
The FGCU Women’s Volleyball team is set to have their first match of the year against Stetson, which will be a two-game series played on Feb.12-13 in Deland, FL.