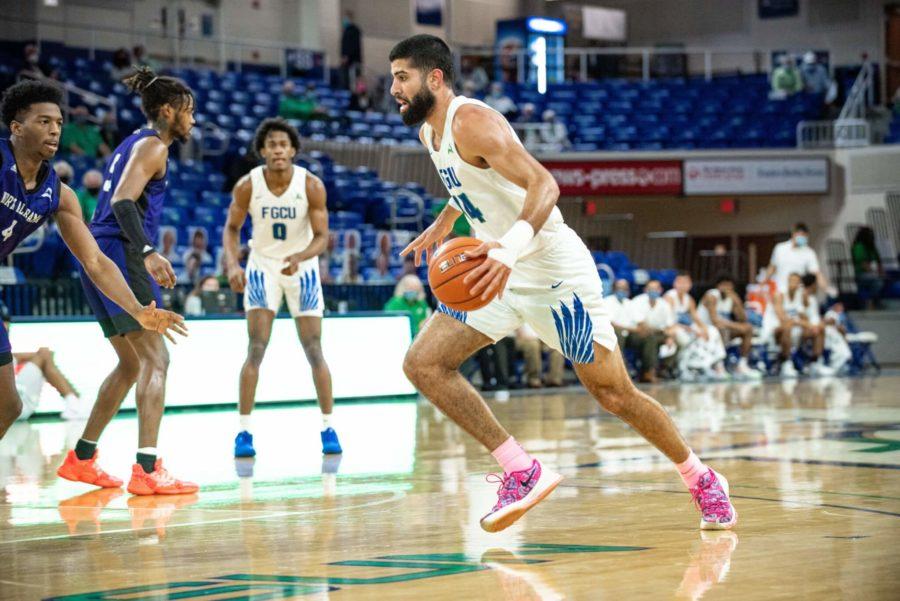 By Jake Henning
Sports Editor
The FGCU men’s basketball team took the first game of two against North Alabama, an 86-60 win, that had the Eagles beating the best team in the ASUN conference.
Even though FGCU got in a rhythm early, the game didn’t start as planned for both sides. While both teams were warming up, FGCU’s own Justus Rainwater was putting on a show with his pregame dunks. A show that eventually led to him ripping off the whole rim on one of his attempts. The game was delayed for about 10-15 minutes as the FGCU maintenance crew had to reassemble the rim.
After a bit of a delay, FGCU quickly got out to a big lead. 10 players got on the scoring sheet for FGCU, as the Eagles played their best game of the season thus far.
“I’m proud of the effort tonight, but the biggest message we shared with the team afterwards was that now we need to win two,” said FGCU head coach Michael Fly. “ “North Alabama is a really good program; they weren’t themselves completely tonight but we know they will be coming with more intensity tomorrow.”
Jalen Warren and Eli Abaev were the most productive players on the floor for FGCU tonight, and they both led the Eagles in scoring with 16 and 14 points, respectively.
This was Warren’s second highest scoring game of the season, after he put up 20 points in a game against Florida National earlier in the year. Abaev has quietly been one of FGCU’s best players, as his defense and rebounding have given this FGCU squad a huge push in some big games. Tonight was his highest scoring game of the year, and the second time he’s posted a double-double in points and rebounds.
The Green and Blue’s other contributors did not go unnoticed, with Cyrus Largie and Dom London both dropping 12 points in the big win. Largie has scored in double digits in every game this season but three and has continued to show his hustle with his second straight game of eight rebounds.
London on the other hand has been a great plug and play guy for Michael Fly, and he showed just how valuable he was tonight. Along with his 12 points, London also had three rebounds and a steal that led to a great finish on the fast break.
FGCU looks to replicate their play tomorrow night as they host North Alabama for the second game of the series, with tip-off starting at 7 p.m.