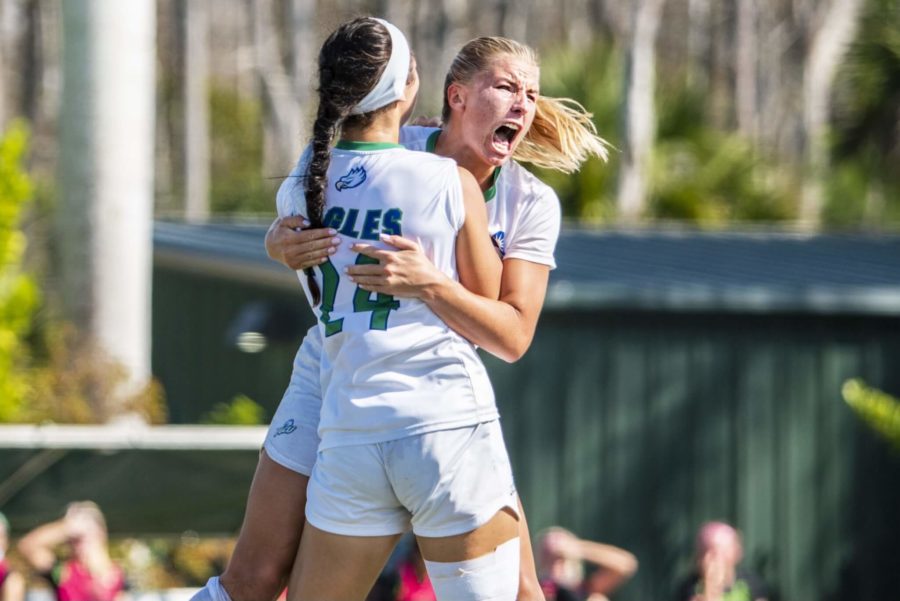 By Jake Henning
Sports Editor
The FGCU women’s soccer team got their first win of the season on Sunday, as sophomore Louise Lillback’s goal in the 93rd minute would help them prevail over Utah Valley.
A hot Sunday at the FGCU Soccer Complex, both teams were held scoreless throughout all of regulation. That was until Lillback’s screamer into the bottom right corner broke the tie and gave FGCU the win.
Freshman goalkeeper Mia Krusinski was perhaps FGCU’s best player, as she had eight saves in her first start for the Eagles. She is also the third player in FGCU history to have a shutout in her FGCU debut.
“Today, we were really excited to get back out onto the field and play the game we love,” head coach Jim Blankenship said. “The combination of being able to open up at home with the Dirty Birds and the way the game ended was great.
A total of nine Eagles made their first appearance on the field for FGCU, and along with Mia Krusinski; Leah Scarpelli, Alyssa Wilson, Ashley Labbe, Kajsa Lang, Meagan Gruber, Matilde Abrahamsson, and Josie Curtis all made their debuts.
After this win, the FGCU women’s soccer squad will be back on the field for a game against FAU on Thursday, Feb. 11 at 7 p.m.