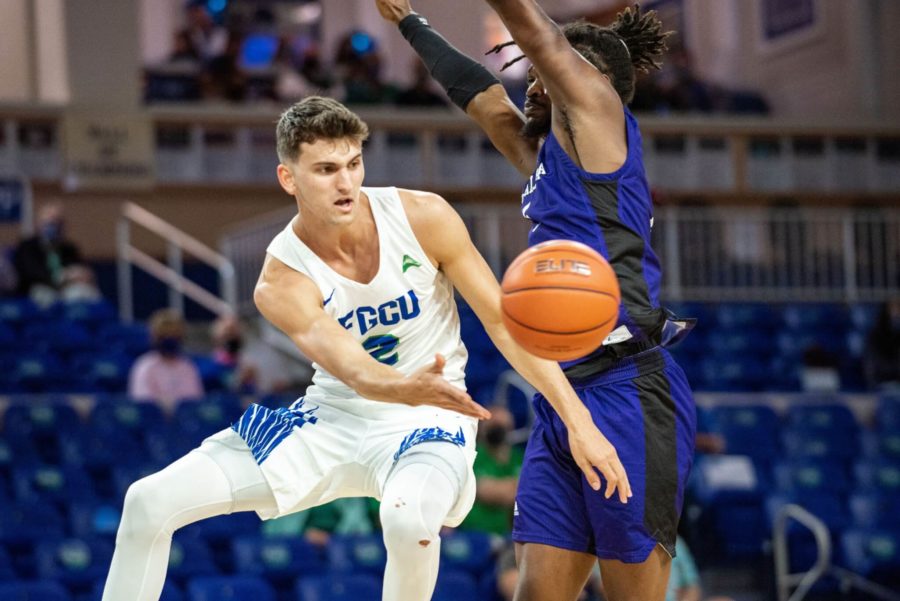 By Jake Henning
Sports Editor
The FGCU men’s basketball team got their first win of the ASUN tournament, beating higher-ranked Lipscomb by a score of 72-60.
Due to a number of games cancelled in the back end of the season for FGCU, they were placed sixth in the ASUN rankings and forced to play No. 3 Lipscomb. These two teams also split a two-game series earlier in the season.
The first half wasn’t kind to FGCU as the Eagles shot 36 percent from the field and 33 percent from three. They managed to keep it to a seven point game going into the half.
FGCU then stormed out in the second half, going on a 21-3 run that led to a Lipscomb timeout at the 11:37 mark. Cyrus Largie had seven of those 21 points and went on to have a team-high 19 points in the game.
From then on FGCU continued to score at will and gradually increased their lead over the rest of the night. Caleb Catto and Jalen Warren, both of whom have been consistent scorers on the season, supplied Largie with some support and both dropped 13 points for the game.
The Eagles will take on North Alabama tomorrow night at 7 p.m. in the ASUN Semi-Finals, which is being held in Jacksonville at UNF.