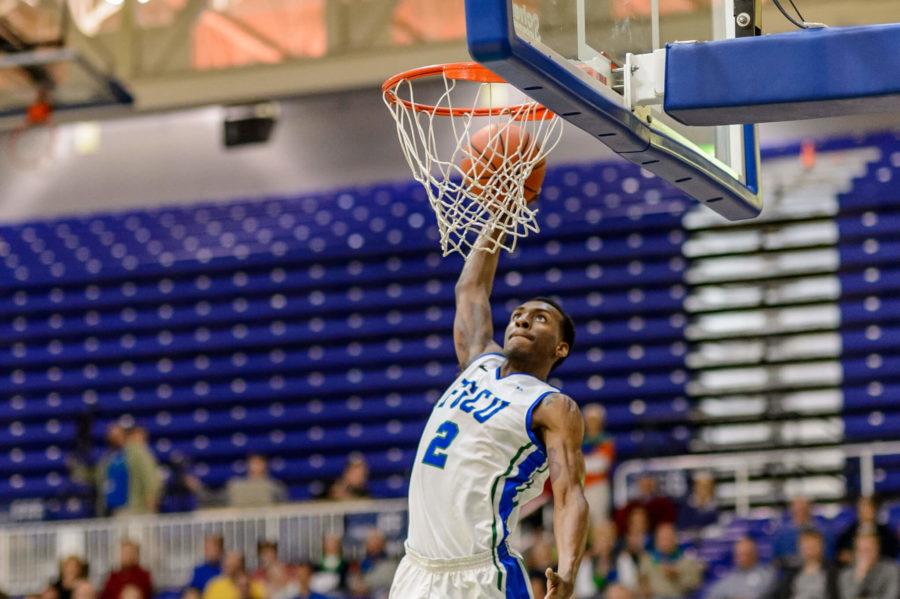 Joe Dooley had big shoes to fill.
He took over a program that had its best year in history.
He took over a program that is growing so fast that it’s hard to comprehend.
He also took over a program that in the year before had one of the toughest nonconference  schedules in the history of the  program.
Last year the men’s team traveled  to Virginia Commonwealth, Duke and  Iowa State all of whom won a game in the  NCAA tournament. They hosted Miami  who finished 27-6, won the Atlantic Coast  Conference and made it to the Sweet 16.
This year is a little different. After the  run that FGCU had last season it became  harder and harder to schedule teams. They  were no longer the cupcake school that  teams could host and beat them down, they  are now a mid-major that teams are scared  of.
Coach Dooley however managed to do  something nobody thought would be possible  just a few years ago, nationally televised  games. There are three to be exact. Nov. 8 on  the road at Nebraska to open up their new  $179-million facility. That will air on Big Ten  Network.
The next is a 7 a.m. game at home Nov.  12 against Hartford on ESPN2. Yes that says  7 a.m. It’s not a typo,  FGCU is really playing  at 7 a.m. Coach Dooley  managed to get FGCU  apart of the ESPN’s 24-  hour tip-off basketball  marathon which will be  huge for the school.
Last and most  recently announced,  FGCU will face Mercer  at home Feb. 21 on  ESPNU. This is a rematch  of last year’s A-Sun  title game and will most  likely determine the top seed in the A-Sun  tournament.
One game that has potential to be aired  nationally is the Nov. 26 game against North  Carolina State. Granted the Wolfpack might  be the third most popular team in North  Carolina but they are no easy school. They  won 24 games last year but fortunately for  FGCU, they lost all five starters.
So coach Dooley I applaud you. Although  the schedule isn’t as good as last year  you managed to schedule some quality  opponents.
On the other hand  women’s coach Karl  Smesko has built yet  again another quality  non-conference schedule.  Like the men, the  women start on the road  at in state rival FIU Nov.  8.
The marquee  matchup comes at the  Hardwood Tournament  of Hope in Puerto  Vallarta, Mexico Nov. 26-29 where in the  second game the Eagles will face off against  one of the best women’s programs of the  past decades. The 2012-13 season for the  Cardinal saw 33 wins and the program’s 26th  straight trip to the NCAA Tournament. The  game will be a matchup of the nation’s best  3-point field-goal defensive team in Stanford  against the team that has lead the nation in  3-pointers made the past two years. Next,  the Eagles face another top opponent in  South Dakota State, which finished last  season 25-8 after it’s fifth straight trip to the  NCAA Tournament.
That matchup against Stanford is  arguably the biggest game in the history of  FGCU women’s basketball. The fact that  coach Smesko constantly builds solid nonconference  schedules year after year shows  how respected he is in the basketball world  and that tougher teams are not afraid to  play FGCU.
Both of these schedules show in a  nutshell how much FGCU has grown in the  last five years. From national television  games to national championship contenders  this year is prone to be even bigger than last  year.