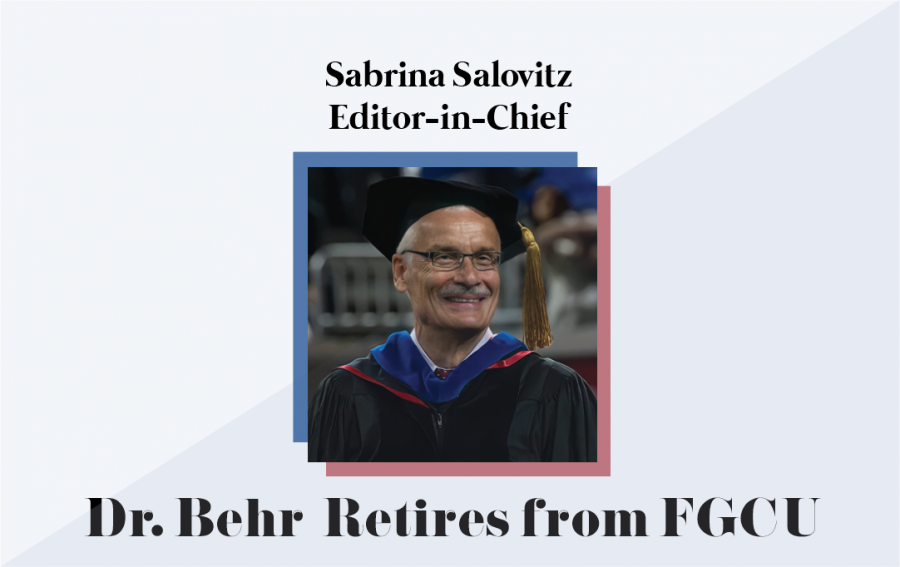 “I was head of architectural engineering at Penn State for 10 years, and I built that program out very successfully,” Behr said. “I moved here to Florida to be Dean and I followed the same operating mode, and that is, you know, retain the good things, get rid of the things that are problematic, and try to build up new initiatives that work to the common good.”

Behr has been a force for change at FGCU. He led the planning and approval of a Master of Science in Engineering (MSE) program and he was heavily involved in the design, administration, and launch of the Emergent Technologies Institute. He was also involved in the design and launch of the outdoor Construction Methods Laboratory behind Holmes Hall, including securing financial support to have that facility named by the Wright Construction Group. These are just some of the developments that Behr has pushed forward.

Behr says he owes much of his success to his experience as both a researcher and a leader. He has a Ph.D. in Civil Engineering and over four decades of experience in the industry. Behr also credits his accomplishments to the support of the people who have worked alongside him.

“I’ve been lucky to have an outstanding group of people working around me and that has enabled me to be successful as Dean,” Behr said. “You don’t do anything by yourself as Dean, you’re always working through other people and with other people.”

Associate Dean Lisa Zidek has worked alongside Behr for the past eight years and while she hopes Behr enjoys his retirement, she says that he will be missed.

“Rich has been a true advocate for our college, and he has definitely kept our college first and foremost in his actions and his words in terms of things that he has tried to fight for,” Zidek said. “He understands our different programs and is an advocate for trying to advance our programs and get the resources that the programs need to be successful.”

Zidek’s sentiments were mirrored by FGCU President Mike Martin who spoke on behalf of the university when he said that Behr will be missed, but we wish him well as he launches a new era in his life.

“Rich has been a valued colleague and an impactful leader at FGCU,” Martin said. “He has been instrumental in expanding and improving the Whitaker College of Engineering.”

Zidek also emphasized Behr’s efforts to diversify the faculty. In his time here he has overseen a substantial increase in diversity in terms of women faculty and faculty from underrepresented groups

“He’s done a lot for the college in terms of diversity,” Zidek said. “Our faculty diversity is amazing if you look at the women in engineering, and the people from a multitude of different ethnic backgrounds that are part of our college, and that’s been part of his hiring initiatives.”

Zidek called his departure a milestone, explaining how Behr has helped transition the new college into something that’s more established. Behr said that he chose to come to FGCU eight years ago because he saw a great opportunity to take a good thing and try to make it better.

“He’s passing the baton to the next leader to grow and really expand,” Zidek said. “But it’s going to be a loss, just in terms of the knowledge base, and the connections he has made to the engineering community.”

Behr’s replacement has not yet been announced, but Huzefa Kagdi, currently a full professor and department chair of Software Engineering at FGCU, will be serving as interim dean starting in August.

Zidek says she hopes that the new dean will be someone who understands the students and the programs and can advocate for them. She wants to see the college move into the next generation of engineering.

“I think I’m leaving this college in a better position than when I came here,” Behr said. “And my advice to next Dean would be, try to move the thing forward as best he or she can, and continue building a good thing.”

Behr plans to stay connected with the university after he leaves but he will be moving back to Pennsylvania where his wife’s family lives, and two of his children attend university. He’s looking forward to playing golf and getting active with Charlie, a beagle shepherd mix that he calls a good buddy.

“I came here nearly nine years ago, and lot of people said, Oh, you’re just going to Florida to retire? And I guess I did, but it took me nine years to do it,” Behr said. “So now I am going to probably try to learn how to relax more and broaden my activities beyond work.”