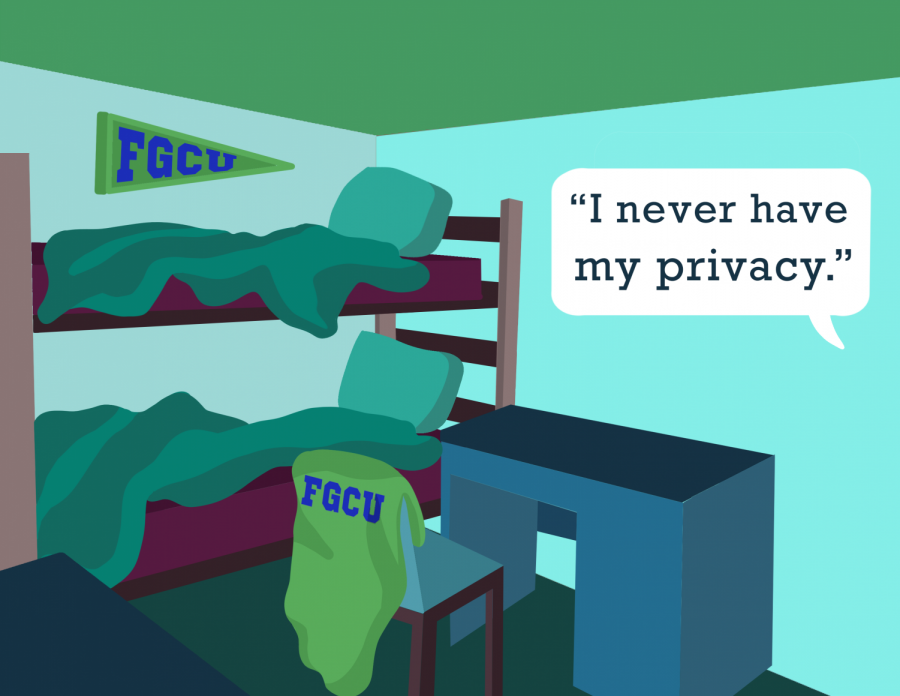 Moving in to on-campus housing can be a great opportunity for students. Living on campus provides easy access to educational resources, social events and support from a community of people your own age.

This year though, some students have said that they are feeling cramped in on-campus housing. Diego Garzaro, an international freshman student who majors in business, said that he had to share a room with two other students. In other words, there were three students to one living space. If given the choice, Diego would not have wanted to room with so many people.

“I never have my privacy so I can’t do my own things,” Diego said. He found himself in this situation because he was late in signing up for housing.

“We place students in temporary overflow housing when we have demand for housing that surpasses the number of rooms we have available,” Director of Housing and Residence Life Jameson Moschella said. “We do this because, every year, we have a small number of students who do not show up for check-in, while others move in and then decide to leave the university for a variety of reasons and move out of their rooms.”

“We are currently at 99.6% occupancy, which is pretty typical for our program,” Moschella said.

There are just 160 beds on campus that are in a shared sleeping space, where two students share one room. The rest of the 4,588 beds are in private bedrooms. The maximum number of students that can live in one room together is usually two but that is not the case in temporary overflow housing.

Moschella said that Housing and Residence Life has used temporary overflow housing many times in the past. He explained that many universities use this form of housing throughout the country.

“It is impossible to predict exactly when students may leave throughout the semester,” Moschella said.

Diego lives at North Lake Village, where the only double occupancy beds are located. One of the beds in Diego’s room was converted into a bunk bed to accommodate all three students.

“We use this unit type because the bedrooms are large enough to accommodate three beds (two bunked, one not bunked) and there are two full bathrooms in the apartments,” Moschella said.

Diego explained that one of his roommates has now left the dorm room. The room now houses only him and his roommate. However, he still feels like the double occupancy rooms are too small for a pair of students to live in and is trying to get himself moved to a single occupancy room.

“I feel the space is too small for two people to live and I never have my privacy,” Diego said.

FGCU Housing’s website says that the university wants students to get the experience of value, convenience, support and services only found with on-campus housing.

“If there are concerns about the level of students’ comfort and/or safety in our residence halls, I would welcome a meeting so that we can discuss these concerns,” Moschella said. “Certainly, we want to be sure all of our students have a positive residential experience.”