Learn where you live 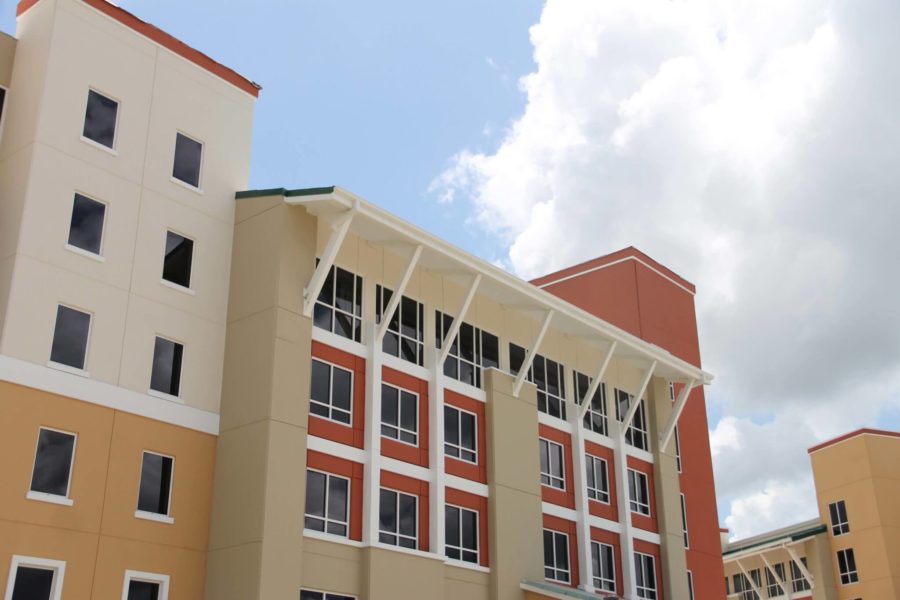 Wouldn’t it be nice to roll out of bed in your pajamas and only have to walk up a flight of stairs to see your academic adviser? Or for a tutoring session?
An incoming freshman might not know how great that could be, but anybody who’s ever had to hop on the shuttle from South Village (SoVi) to campus just to meet an adviser for a few minutes probably thinks that sounds pretty great.
This fall, that scenario will become a reality. Eagle Hall, the newest addition to the  SoVi residence buildings, will house more than 500 incoming freshmen. It will also include a brand new six-office suite on the 4th floor with four new first year academic advisers, a Center for Academic Achievement (CAA) coordinator, and an assistant director.
Michael Rollo, Vice President of Student Affairs said that a big focus of the University is to find ways to, “support the learning community intellectually and academically.”
Having advisers more readily and conveniently available for first-year students is one way of doing this.
The reason for this new office and new staff is due to an increase in the budget. Currently there are four advisers in the first-year advising office in McTarnaghan Hall.
The budget increase allows for three new positions: an assistant director of advising and two more advisers. There will now be three advisers and two directors in McTarnaghan, and four advisers and one director in Eagle Hall.
Brian Fisher, director of housing at the Florida Gulf Coast University, says “we’re really excited about the first year advising being right there … freshmen won’t even have to go to campus … that’s huge.”
Aside from just having a
new office space, the increase in staff and budget has also made way for there to be new programs rolled out specifically for freshman students.
Florida Gulf Coast University’s Director of New Student Programs Andrew Cinoman took some time to talk to Eagle News about these exciting new programs. The first program is one to require more intentional advising services for students with academic difficulties. 15 percent of freshmen have their GPA drop under a 2.0 in their first semester. This program will require students to have more meetings with advisers on a scheduled, frequent basis, as well as tutoring with the Center for Academic Achievement.
“It can be so easy to slip through the cracks freshman year,” Cinoman said.
“We want to not only help students improve academically, but also help with decision-making skills and teach how negative decisions can impact their lives.”
The second program is essentially an enhancement of the already existing Major Selection Workshop. “We want to provide more services, resources, and be more intentional in our advising, working specifically with undeclared majors,” Cinoman said.
Lastly, the first-year advising team is working on coming up with something along the lines of “new student meetings” where students would be invited – or perhaps required – to meet with 15-20 of their peers in their major/college, to get to know their counselors a bit better and be reminded of the importance and usefulness of first year advising. The meetings would be scheduled to take place within the first month of school, so that any students that are already having trouble can be identified early and helped as soon as possible. This particular problem is scheduled to begin in fall 2015.
Another unique part of Eagle Hall is a faculty apartment that was built inside of it. This two-bedroom apartment is intended for a faculty member to live in eventually. This faculty member would not pay any rent, but he or she would have added responsibilities, being part of what is considered a “living learning community,” where those living in that community have something academic in common. There are several campuses in the country that have faculty apartments. This would be FGCU’s first. The apartment will likely be rented out this fall until a faculty member is chosen to live there.
Eagle Hall is currently under construction, but will be ready for faculty members to move into their brand new offices on Aug. 1, and for students shortly thereafter.
With its almost one year-old swimming pool and all of the new amenities of Eagle Hall, why would anybody want or need to leave SoVi other than for classes?
Delete Image
Align Left
Align Center
Align Right
Align Left
Align Center
Delete Heading