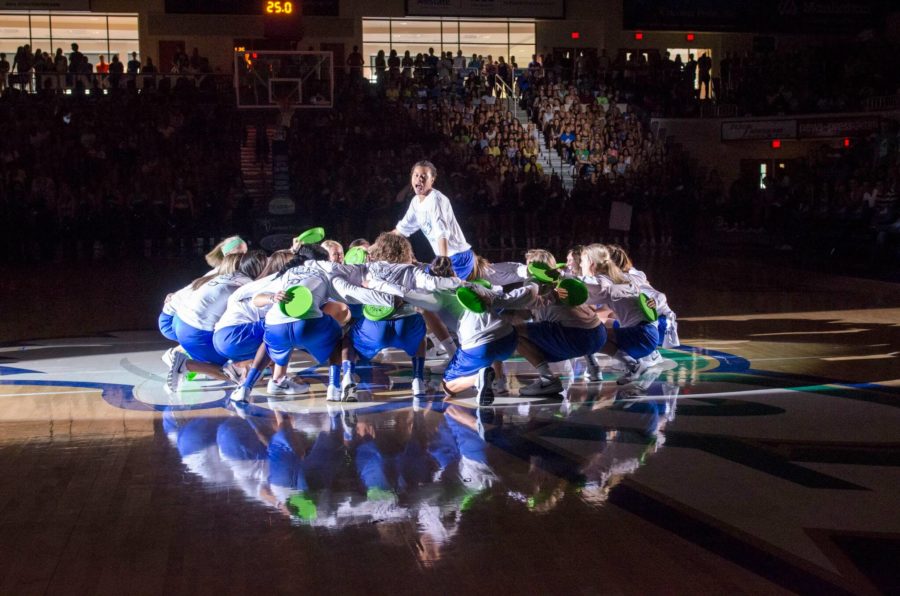 Eagle Revolution kicks off the 2014-15 athletics school year at Florida Gulf Coast University. This is the fifth consecutive year for this event.
More than 2,300 Dirty Birds — the school’s student fan club — have already signed up. A record crowd of 3,800 students attended Eagle Revolution.
The Dirty Birds joined students from FGCU housing and Greek life to celebrate the kickoff of the 2014-15 school year. Students had the opportunity to win a custom Dunk City Ford Mustang or $30,000 in cash or tuition.
Doors opened at 6:30 for the 7 p.m. main event, and students received free burritos from Moe’s upon entry. B103.9’s Big Mama and M DOT served as the emcees throughout the event.
Students also had the opportunity to win various prizes, ranging from an iPad mini to spring break trips. All currently enrolled students with their Eagle I.D. were eligible to win.
Each pre-registered Dirty Bird received their official shirts and membership card. The membership card allows for the Dirty Birds to pick up game tickets earlier than general admission, as well as receive discounts at various restaurants in the area.
“Eagle Revolution is an exciting kick-off to the new school year and has become a fun FGCU tradition over the past five years,” said FGCU President Wilson Bradshaw. “The event is a great collaborative effort by FGCU Athletics and other departments on campus as well as our valued corporate sponsors, and provides new students with an opportunity to celebrate their arrival at FGCU and meet our wonderful student athletes and coaches. Go Eagles!”
FGCU has won a combined 36 conference regular-season and tournament titles in just seven Division I seasons as a member of the A-Sun and Coastal Collegiate Swimming Association. Furthermore, in just three seasons of D-I postseason eligibility, FGCU has sent eight teams to the NCAA Tournament.
Men’s golf, swimming and diving, and men’s tennis have all participated in their respective NCAA Championship, bringing the total NCAA appearances for FGCU to 14 in the past three years.
“Last year at Eagle Revolution was the first time I personally addressed the Dirty Birds. The atmosphere and support were tremendous,” remarked men’s basketball head coach Joe Dooley. “It’s a high-energy event and a great way to kick off and raise awareness for each program, but especially those which start home competitions in a few weeks.
Women’s basketball head coach Karl Smesko said, “Supporting our team is what we do.”
Also, FGCU Athletics unveiled its new Wings Up mobile app in conjunction with SuperFanU. The fully-customized loyalty-rewards platform was available for download and allows students to check in at each of FGCU’s sporting events to earn points throughout the school year toward exclusive prizes that will not be offered anywhere else.
Student athletes and head coaches from FGCU’s 15 different programs were introduced and many addressed the crowd.
“The best part of playing here is playing in front of this amount of fans.,” said returning basketball player Brett Comer.
Last year, FGCU men’s basketball had 13 sold out games. FGCU also led in the A-Sun with an average attendance of 4,340 fans at Alico Arena.