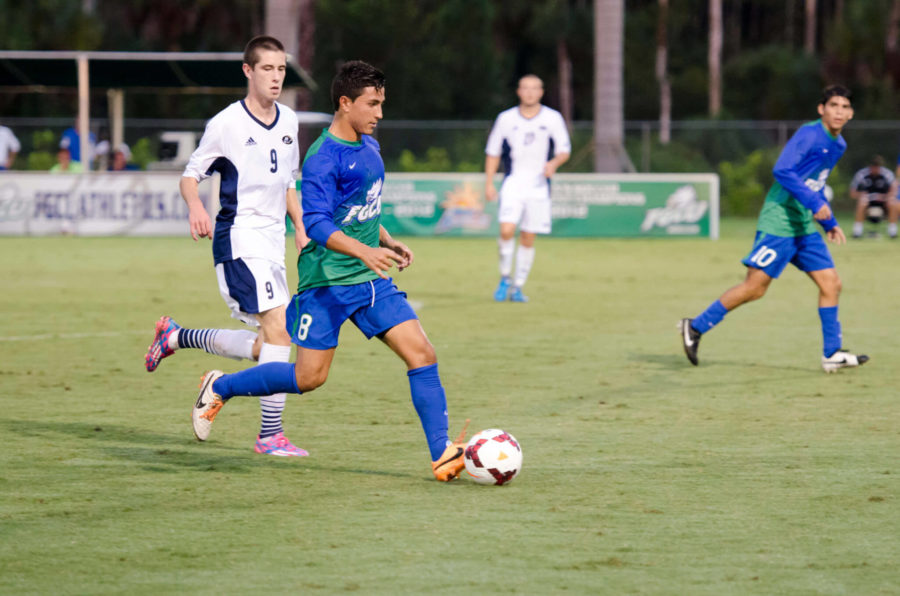 Kelli Krebs contributed to this report.

The Florida Gulf Coast University men’s soccer team heads to California this Friday to play the University of San Francisco. According to FGCU athletics, it is the first time the two schools will play. The Dons are 2-1 for the season and have a new coaching staff this year that is proving to be effective.
“I think San Fran is a very good team,” FGCU head coach Bob Butehorn said. “They just beat Northridge and they have done very well so far. They got a good coach that has done well and I think our preparation will start once we have looked at the tape and get a look at them.”
The Eagles are coming off of a 1-1 double overtime tie against the University of Akron on Saturday. The Eagles played in front of a record-setting crowd of 1,574 but were not able to get an outright win. FGCU led the first half in shots, with five to Akron’s three, but in the 27th minute, Akron’s Adam Najem scored a goal off an assist from Saad Abdul-Salaam to give them the lead.
Junior Felipe DeSousa came in for the second half and tied the score with a goal off a free kick in the 53rd minute.
“It was a decision between me and Madrid,” DeSousa said. “I told him to leave it and make a run because if he made a run, the other defender would follow and that would open a big gap and that is exactly what happened.”
The Eagles didn’t score in the rest of the second half and as result, went into double-overtime. The closest FGCU came to securing a win was when sophomore Isaiah Madrid made a shot in the last minute of the second overtime. However, the shot was saved by Akron’s goalie, Jake Fenlason.
“It is still early and we really did let his one go,” Butehorn said. “I respect the team and I like the way we played, but we let one go.”
The Eagles are 1-0-2 for the season and will stay in California to play Saint Mary’s College on Sunday, Sept. 14 after their game with the University of San Francisco.
Portland
The FGCU men’s soccer team and Portland University finished in a draw Thursday night after going into double overtime in a battle for a spot in the NSCAA poll.
With seconds dwindling down on the clock, FGCU freshman Miguel Jaime launched himself into the air toward the ball as a last-ditch effort for a winning goal. The ball went sailing overhead.
“It was an unfortunate that there was no score in the end,” Jaime said. “We knew that if we got the ball up there, we’ve got some talented players that we could get something out of it.”
After shutting out the University of South Florida last week, FGCU went from going without any votes in the preseason to being the first team outside the Top 25 in the NSCAA poll. Saturday’s foe, Akron (38 votes) sits right behind FGCU (48) two teams out.
“With this part of the year, we’re still trying to find out the right chemistry, the right lineups and the right formations,” Butehorn said. “Rankings don’t really do anything for you. They’re senseless. The most important thing for us is to get into a spot where in November, we have a chance.”
“(The rankings) are nice, but it really doesn’t matter,” Jaime said. “We try not to focus on that.”