Eagles head to Miami without any wins after home stand 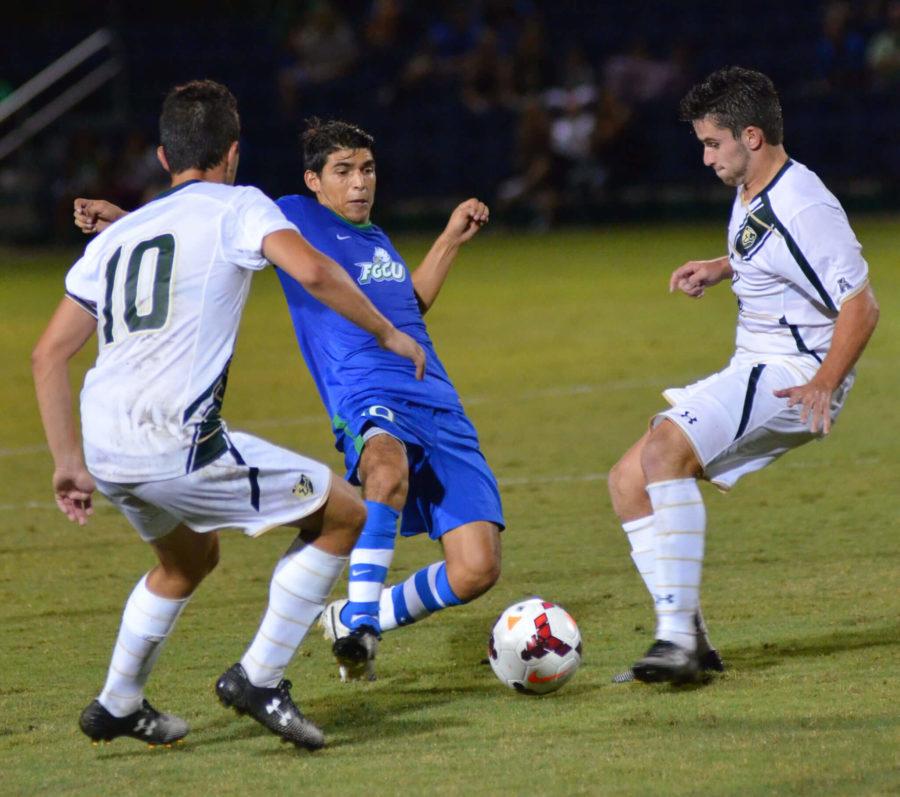 The Florida Gulf Coast University men’s soccer team heads to Miami to play Florida International University on Wednesday Sept. 24.
FIU is coming off a 2-1 win over San Diego state on Friday and are 2-3-1 for the season. Senior forward Quentin Albrecht leads FIU with 25 shots and three goals for the season.
FGCU lost 1-0 to the University of Washington on Thursday and had a double-overtime 0-0 tie against Brown University on Saturday. They are 1-3-3 for the season.
Brown game scoreless
FGCU trailed Brown in shots for the first half, with five to their six. Noticing that Brown was weak in wide back positions, Butehorn changed the formation from a 4-4-2 to a 4-4-3 at the start of the second half to create more goal opportunities.
As a result, FGCU had 13 shots to Brown’s four in the second half. They dominated overall with 18 shots to Brown’s 10, forcing the bear’s goalkeeper to make seven saves.
In the first overtime, senior Henry Peganos came close to a goal in the 92nd minute but hit the post. Junior Rodrigo Saravia tried to capitalize on Peganos attempt with another shot a minute later but Brown’s goalie Mitch Kupstas saved it.
The eagles’ last effort came from senior Xavier Silva in the last minute of the game. He missed the goal to the right and the eagles had to settle for their third tie of the season.
“At the end of the day, we took that game almost as a training session,” Butehorn said. “We have to figure out how to play against teams that sit in against us and stack up against us. We have to be smarter in breaking them down… We have given up one goal, that’s the most we have given up in any game. We are playing against some really good teams, so we need to score more.”
Washington a battle
“It’s unfortunate with college soccer that you play games back to back and don’t have time to spend on necessities and improvements that we need to make,” FGCU head coach Bob Butehorn said. “We know we have the guys that can score goals, we just have to get them more in tune with how they move. We are going to work on that and scoring goals is going to come.”
In the game against Washington, FGCU led the first half in shots. Sophomore Isaiah Madrid led with three shots. The closest FGCU came to a goal in the first half was freshman Arion Sobers-Assue’s shot in the 27th minute. It was saved by Washington’s goalie Spencer Richey. Madrid followed immediately with another shot but his attempt was too high.
The eagles had many opportunities in the second half. Senior Santiago Echeverri led the eagles with five shots but was not able to secure a goal. With five minutes left in the game, Washington’s Mason Robertson scored a goal off an assist by Justin Schmidt.
“I give credit to Florida Gulf Coast University because that was the best game we have played all year or the best team we played all year,” Washington’s head coach Jamie Clark said. “They pushed us and had a couple good chances to win it. It was so close that one goal was going to win it either way.”
Despite the loss, FGCU goalie Nathan Ingham finished the game with a career-high nine saves.
“It was a good call to a soccer game no matter how you put it,” Ingham said. “Both teams had chances, both teams did good things, made big saves and it was all-around good play. It is good for the fans and good for the culture here at our school. We can play with any team in the country and I think we proved it again tonight.”