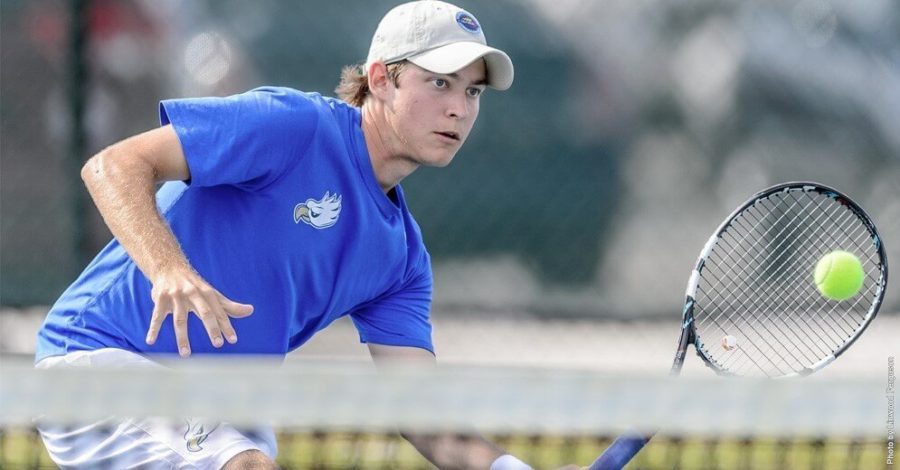 The Florida Gulf Coast University men’s tennis team heads to Athens, Ga., Oct. 16-19 to compete in the ITA Regional Championship.
“The fall is all about me learning about the players and the players learning about themselves,” coach CJ Weber said. “We are laying the foundation for the spring season and building up our culture and team identity for who we are going to be in the spring. I think we are doing a great job of building up our team identity and I think teams are taking notice.”
The team had a successful weekend at the Georgia Tech Invite. They ended the tournament with 16 wins and three runner-up finishes, according to the FGCU Athletics website.
To start the tournament, the team won all of their double matches on Friday. Junior Lucas Vaz and freshman Austin Bates defeated the No. 1 doubles team, Auburn’s Plaskett and Van Dooren, in a close match of 8-7(5).
According to Weber, Vaz and Bates were up 7-4 in the match at one point. However, Auburn broke them twice to go into a tiebreaker. Auburn was up 4-1 in the tiebreaker but Vaz and Bates came back to win the match.
“They came back in that tiebreaker after Auburn really kicked up their level,” Weber said. “Responding like that is not easy to do. A lot of times it is just easy to let the match go in that point and time but they showed a lot of resiliency and didn’t settle for a close loss, they got the win. ”
Rounding out doubles play, junior Eduardo Alfonzo and freshman Sam Chaffin won their doubles match  8-7(0) and redshirt junior Michael Beiler and redshirt sophomore Chris Perrigan took down their competitors 8-6.
In singles play, Alfonzo defeated Zack Kennedy in two close sets of 7-6, 7-6(6).  Beiler won his match against Evan Holvoet 7-6(5), 7-6(6). Perrigan also defeated his competitor. He won the first match 6-4, lost the second match 6-7(3) but came back and won the last set 7-6(3).
Vaz came close in his match against Dante Saleh. He won the first set 6-3 but lost the next two sets 6-4, 7-5.
“Even though he lost his first round, he lost to a good player,” Weber said. “He started implementing a lot of things that we have been talking about with him since he came to FGCU last year. I told him I was very encouraged by how he was competing because he was taking care of a lot of things that we were addressing.”
On Saturday, Beiler and Perrigan were the only doubles team to pick up a win in their match. They defeated Pinto and Poysti 8-7(3). Despite the win on Friday, Vaz and Bates fell to their competitors 8-3.
Highlighting singles play was Alfonzo and Beiler. In the quarterfinals, Alfonzo defeated Georgia Tech’s Michael Kay 6-3, 4-6, 6-4. In the semifinals, he had to take down his competitor in another three sets. He lost the first set in a close tiebreaker of 6-7(2), but came back and won the next two sets 6-4.
Coming out with a victory in both matches was feat that surprised Weber. Alfonzo was on the court for six and half hours on Saturday but continued to push himself to come out with wins.
“I just wanted to fight for every point,” Alfonzo said. “I had a point-by-point approach because you don’t really focus on the outcome… I really liked the way I competed and I want to keep that up.”
Beiler also won his two matches on Saturday. In the quarterfinals, he defeated his competitor 6-0, 6-3. In the semifinals he took his competitor to three sets. After losing the first 2-6, he came back and won the next two sets 6-3, 6-0 to advance to the finals.
On Sunday, Beiler and Perrigan fell to Georgia Southern’s Lanne and Sala in a close match of 8-6 in the final doubles match.
Following doubles play, Alfonzo and Beiler competed in the final matches of their respective draws. Alfonzo lost to Christopher Eubanks 6-3, 6-4 and Beiler lost to Albert Sala 6-4, 6-0.
Beiler was out last season with a shoulder injury and is using his performance at the invite to gain confidence and get ready for the rest of the season.
“It has been a long road getting back. I have not played competitive tennis for a year and half almost,” Beiler said. “It felt really good to finally get those wins under my belt.”
With only two wins from Perrigan and Vaz in their backdraw matches on the final day, Weber wants to work on finishing tournaments stronger than they have been.
“The last day at the Bedford Cup and the last day at the Georgia Tech Invite, it wasn’t that we had horrible days, but I think we could have closed out those tournaments a little bit better than we did,” Weber said. “We are going to improve on that and hopefully take that into regionals because that is obviously going to be a very tough tournament.”