Eagles ready for another successful run 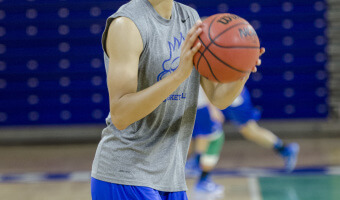 For the Florida Gulf Coast University woman’s basketball team, the beginning of the season inched a little closer Oct. 30 when the Eagles hosted their annual media day during practice.
The Eagles are coming off a stellar performance last season that ended in a trip to the NCAA tournament. The bid came off A-Sun Conference regular season and tournament championships.
The team is prepared to come back harder than ever following its loss in the first round of the NCAA tournament to Oklahoma State. Redshirt junior and leader for the Eagles, Whitney Knight, is prepared to put the team on her back for a better performance than last season’s finish.
“I am looking forward to playing with my teammates and hopefully accomplishing more than we did last season,” Knight said. “We’re looking to win the conference championship again and get back to the NCAA tournament further than we did last year.”
All pre-season polls point to FGCU to win the conference this year, and the team is using this as a motivator. The team had just one loss in the conference last season: to Northern Kentucky early in its conference schedule. The loss didn’t slow the Eagles down, however, as they finished out the year strong in route to the program’s second NCAA tournament appearance.
One huge motivator has been the return of head coach Karl Smesko, who is back after he was rumored to be in the running for jobs at other schools across the nation, including basketball powerhouse Indiana University.
Senior Jenna Cobb, last season’s A-Sun Tournament MVP, discussed Smesko’s return and the effect he has on this team during last Thursday’s session.
“It just shows that he believes in us, and he knows that we have a very good team here,” Cobb said. “He’s been here for 12 years and has built this program here. We’re very happy that he has stayed to try to make it back to the tournament and get some wins.”
Smesko enters his 13th year as coach for the Eagles with four A-Sun Coach of the Year awards and has never finished lower than first or second place in the conference.
“We think we have the ability to win a conference championship. It’s going to be very difficult; the conference is just as difficult as it’s been since I’ve been here,” Smesko said. “There’s a lot of really good teams and we’re going to have to be prepared.”
The Eagles are locked, loaded and ready to claim the program’s remarkable fifth-straight conference championship. Junior standout Stephanie Haas feels the team has the right pieces to continue competing for the championship.
“I think we definitely have the pieces. We have a bunch of different people who can do different things. We really just need to work to each others strengths,” Haas said. “That’s what we are working on. Helping each other play and do what they can do best.”
What are the strengths of this team that’s now won four straight conference titles? Besides the ability to hit the outside shot, this is a team that now brings back four starters from its NCAA tournament loss a year ago.
“I think it is mostly going to be teamwork,” Knight said. “Working together with each other and knowing what each player is best at so we can utilize each player at their strengths,”
FGCU will kick off the season Nov. 14 against George Washington University in Alico Arena. The game is a green-out, will take place at 7 p.m. and can be seen on ESPN3. Tickets are now available for students, while general admission tickets can be purchased starting Nov. 10.