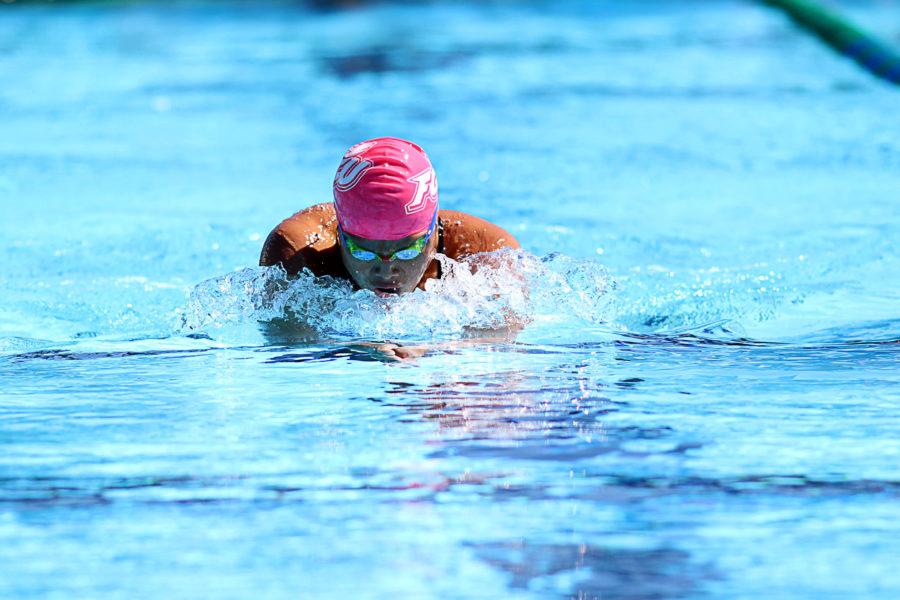 The Florida Gulf Coast University swimming and diving team began 2015 with a sweep Saturday at the FGCU Aquatic Center. One of the three wins was over Liberty by a score of 217-77. The other two wins were over Campbell and Central Connecticut State. This moves the Eagles record to 8-1 and 3-0 in the Coastal Collegiate Swimming Association on the season.

“Everyone knows the story of how Liberty won the conference last year after we made a few mistakes, but it was nice today to come out and say we’re ready to try and get it back,” FGCU swimming and diving coach Neal Studd said.

The Eagles won 14 of the 16 events contested on Saturday. Reigning All-Americans Kira Toussaint and Emma Svensson each took home four victories for the Eagles during the meet.

The 200-yard medley relay kicked off the event, and it was the Eagle relay team of Toussaint, Evita Leter, Svensson, and Becky Derogatis who came away with the first victory of the day for FGCU with a time of 1:42.06. The FGCU team of Sandra Wilk, Katie Armitage, Yee Ching Wong, and Kristen Julien finished in third with a time of 1:45.31.

Devon Robbins, Maggie Holling and Cassie Niles then swept the top three places in the 200-yard freestyle for the Eagles.

After that, Toussaint took home her first individual win of the day in the 100-yard backstroke, finishing in 56.52. Wilk finished third in the same event with a time of 58.49

Leter made some history of her own in the 100-yard breaststroke for the Eagles. She won with a new pool record time of 1:03:17. Armitage finished in second  with a time of 1:04:26 for FGCU.

On the diving board, it was more of the same for the Eagles.   Cayla Collins was running the show, picking up victories in the one and three-meter diving with scores of 232.87 and 250.42, respectively. Mikaila Buening finished behind Collins in both diving events with scores of 224.77 and 217.27, respectively.

Toussaint nabbed her second individual victory of the day in the 200-yard backstroke with a winning time of 2:02.49. Her FGCU teammate, Karen Vilorio, finished in third with a time of 2:07.12.

Wong picked up another win for the Eagles in the 100-yard butterfly before finishing second in the 200-yard midividual medley.

The Eagle team of Julien, Derogatis, Toussaint and Svensson closed out the day for FGCU with a convincing victory in the 200-yard freestyle relay with a time of 1:33.94.

The Eagles will remain home to welcome Nebraska at 10 a.m. Saturday, Jan. 10.