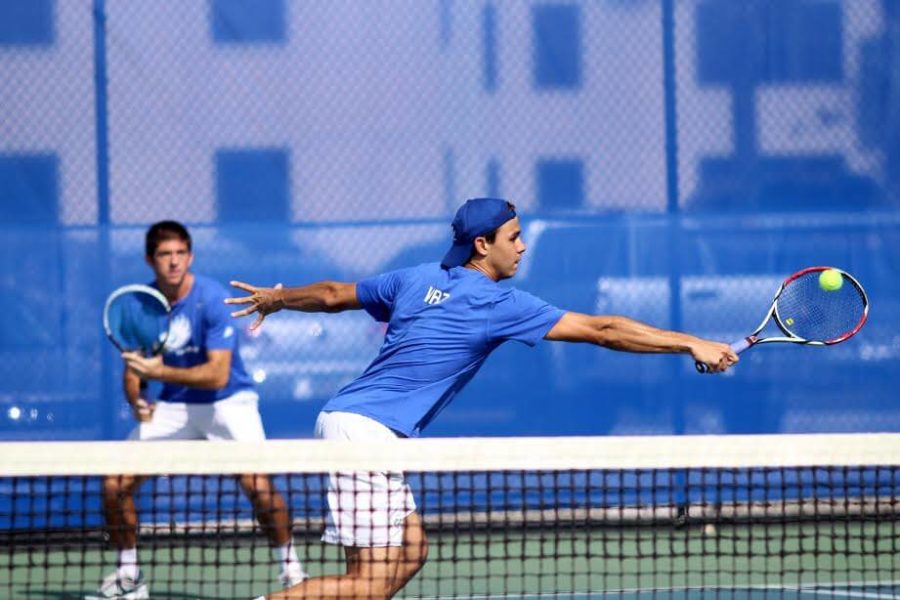 The Florida Gulf Coast University men’s tennis team heads to Tallahassee for back-to-back dual matches against Florida State University this Saturday and Florida A&M University on Sunday.
The team is coming off of a successful weekend at the FGCU Spring Invite where they competed against high-caliber teams. They played nationally ranked No. 45 Louisiana State University, Texas Christian University and Rice University.
“It was an incredible weekend for the guys,” FGCU head coach CJ Weber said. “We were facing some of the best talents in the country… Our guys stood toe to toe with every team and fought hard and represented themselves very well.”
The team kicked off the invite by winning six matches on Thursday. In the Flight 1 singles matches, Eduardo Alfonzo defeated LSU’s No. 67 Tam Trinh in three sets. He won the first set 6-4, lost the second 2-6, and won the last set 7-5.
“I went into the match knowing what I needed to do to win,” Alfonzo said. “I knew it was going to be a really hard match and I knew I needed to fight and give everything I got.”
In the Flight 2 singles matches, Michael Beiler defeated LSU’s Andrew Korinek. After losing the first set 1-6, he came back and won the next two sets 6-1, 7-5.
In Flight 3 singles, Austin Bates defeated Harrison Kennedy 7-5, 6-4. Sam Chaffin came close in his match against LSU’s John Michael Busch but lost 7-6(5), 7-5.
In doubles, the team won three out of its four doubles matches. Tianyu Bao and Jordi Vives defeated Chris Simpson and Justin Butsch 6-0. Lucas Vaz and Ricky Ventura defeated LSU’s Eric Perez and Tam Trinh 7-6 (4). Austin Bates and Michael Beiler also defeated their LSU competitors 7-5.
On Friday, the team won three doubles matches. In the Flight 1 doubles matches, Tianyu Bao and Jordi Vives won both of their doubles matches. They defeated Rice’s Jamie Malik and Srikar Alla 6-4 and then defeated Ole Miss’ Ricardo Jorge and Stefan Lindmark 7-6 (2) in their second match.
“Jordi is a really good doubles player and he has helped me a lot on the court,” Bao said. “We won our matches not easily, but we obviously knew we could win those matches.”
Capping off the wins for the day was a 6-2 win from Beiler and Bates in their Flight 2 doubles match.
On Saturday the team won five out of six singles matches. In Flight 1 singles, Andres Alfonzo defeated Rice’s Sriker Alla 6-3, 6-2. In flight 2 Eduardo Alfonzo, defeated David Warren 6-4, 6-4. Bao also defeated his competitor, Zack Yablon in three sets. After winning the first set 7-6(0), he lost the second 2-6, but won the final set 6-4.
In Flight 3, Beiler defeated Rice’s Henrik Munch in a close match of 7-6 (4), 6-4. Bates also defeated his Rice competitor, Gustavo Gonzalez, 6-2, 4-6, 7-6 (8).
“Austin Bates went 2-1,” Weber said. “Those SEC wins are always big for him… He plays with a lot of heart and passion.”
The success transcended over into doubles when Eduardo Alfonzo and Chaffin defeated LSU’s Kennedy and Busch 6-3.
On the final day, the team played TCU in singles. Chris Perrigan defeated Blake Wiggins 6-4, 6-3. After not competing for six months due to a wrist injury, Jordi Vives won his singles match 7-6 (6), 6-3. Eduardo Alfonzo won his match 6-2, 6-2, going undefeated in single play for the tournament.
“It was great to start the semester with a win,” Eduardo Alfonzo said. “It gives me confidence and keeps me motivated that I am doing the right things.”
Andres Alfonzo came close in his match, but fell 6-4, 4-6, 4-6 to TCU’s Nick Chappell. Bao also lost in a close match of 7-6 (3), 6-2.
“It was the first week of school and we played against probably the best competition all year,” Bao said. “I saw a lot of positive strategies from the team and there is a lot to take away. We need to keep riding that momentum to get ready for Florida State.”
The team finished the tournament by winning six out of their 14 matches against LSU and three out of nine matches against TCU. They also beat Rice 5-1 in the tournament, according to Weber.
“This tournament helped get us ready for FSU,” Weber said. “Our first dual match is one of the toughest and I believe in challenging the guys early. Everybody knows where they stand and it was just icing on the cake that we got those wins and have the confidence. Now we are ready for the dual matches to begin.”