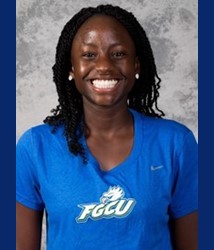 The Florida Gulf Coast University women’s tennis team (0-1) prepares for the FGCU Spring Invite Jan. 17-19. The team is coming off of a 4-3 loss to Syracuse (2-0) on Thursday.
“We can build off of that match a lot for our season coming up,” FGCU head coach Courtney Vernon said. “Overall, there is a lot to get better on, but it is kind of exciting too because the level of the team is just getting better.”
Sarah and Elizabeth Means kicked off the match with a doubles win over Syracuse’s nationally ranked doubles team of Amanda Rodgers and Rhiann Newborn. They took the match into a tiebreak and won 7-6 (9-7).
“We got down in a pretty deep hole early on,” Elizabeth Means said. “But, we stayed calm and just stayed focused and figured out what strategy worked against them. Then we just played one point at a time.”
Alex Landert and Julianna Curtis clinched the doubles point for the team with a 6-0 win over Syracuse’s Nicole Mitchell and Olivia Messineo.
Despite earning the doubles point, the team lost four out of its six singles matches.
Sarah Means lost in a close match to Rodgers. She lost the first set 6-1, took the second set into a tiebreak, but lost the match 7-6 (7-5). Johanna Sterkel also came close in her match. She lost the first set 7-6 (7-3) and the second set 6-4.
Syracuse’s Valeria Salazar defeated Breana Stampfli 6-2, 6-4. Landert also lost her match to Syracuse’s Mitchell 7-5, 6-2.
Elizabeth Means won her match against Syracuse’s Komal Safdar 6-3, 6-4. Curtis won her match by default. She won the first set 7-5 and then Breanna Bachini defaulted in the second set.
“I thought I played aggressively and fought well in the matches,” Curtis said. “The second match I would have of course liked to finish, but I won the first set and then it was about tied in the second.”
Despite kicking off the spring season with a loss, Vernon is focused on prepping the team for the matches to come.
“We are working on being aggressive and taking the opportunity points and opportunity balls,” Vernon said. “We are going to be working on drills in practice and creating pressure situations for the girls so it feels like another day of practice and they know what they need to do.”