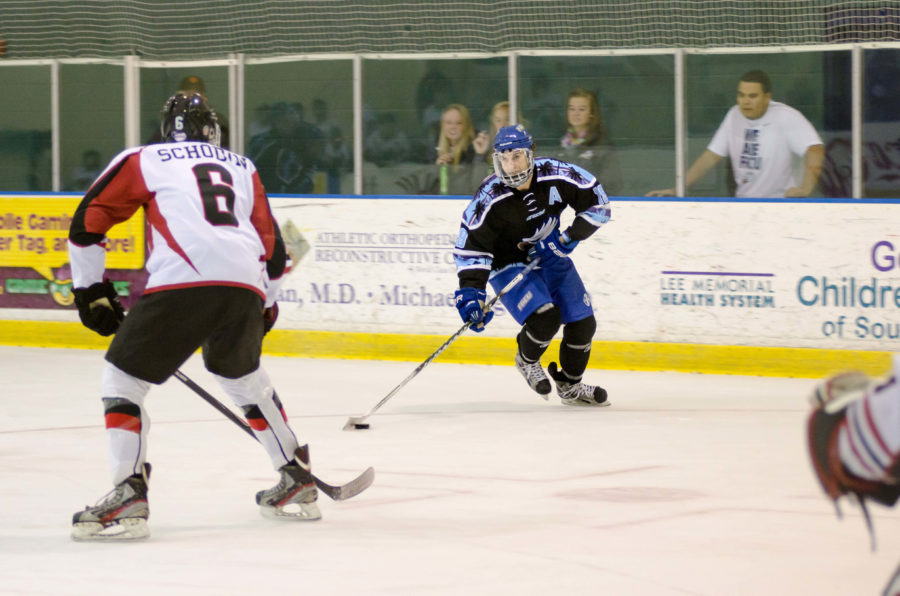 Despite the funding battle that Florida Gulf Coast University’s hockey club fought throughout the first half of the season, the Eagles didn’t let it deter their focus and positive attitudes.
For the first time in program history, the Division II hockey team won every game throughout the first half of the season. The Eagles now stand at 19-0 after defeating the Illinois State Redbirds last Friday and Saturday nights, 8-1 and 5-2.
According to the club’s director of communication, Matthew Maida, the club continued to reinforce the idea to the team that the players’ job is what happens on the ice and not to get distracted.
“They played better and rallied after not getting the funding because they wanted to prove to the Southwest Florida and the FGCU community that we are really a talented hockey program,” Maida said. “We’re a popular club, and we deserve to play being one of the No. 1 teams in the country in our division. These are athletes that deserve support, they pay to play at the competitive level that they do and could easily play at a higher level. We’re very lucky.”
Right now the hockey team is relieved about getting the funding. That boost has only helped the Eagles to excel further. Now, they are even more focused because the idea of winning at the national championships in March is a huge goal.
“I think the expectations are high,” Maida said. “They need to be tempered because winning a national championship is never easy. No matter how good the team performs and looks on paper, it really is anybody’s game when they drop the puck at nationals. An amazing season like this can turn into a tragedy if focus is lost.”
According to coach Bob Brinkworth, players added to the roster this year,along with position and line changes have been crucial to the team’s success.
“Goaltending and defense have been excellent,” Brinkworth said. “We have considerably more size on defense than we’ve had in the past seasons. We have two very strong lines. Dillon [Duprey] is a very talented player. He worked hard all summer and he’s the leading scorer on the team this year. The line that has [Nick] Schilson and [Jordan] Klotz on it has been scoring regularly. All of our offense is contributing.”
According to Brinkworth, one of the keys to the team’s fantastic season is the camaraderie that the guys share. Also, Brinkworth said that both he and assistant coach Mike Lendino are happy with how the team has shaped up offensively and defensively, and they would change very little to the team where it stands now.
“The chemistry on the team has been a huge difference in getting the wins,” Brinkworth said. “The defensive pairings are a big difference in where the team was last year. That’s one of the most important points of the game. The only thing that I think would change is injuries to key players. We have a challenge coming in the next semester, but we have confidence.”
The Eagles have a tough weekend facing both Michigan State and University of Michigan for four games total that will be played back-to-back from Friday through Monday, Jan. 16-19. All games begin at Germain Arena’s blue rink at 8:30 p.m. except Monday’s game, which is at 1 p.m. Tickets can be purchased for $5 each or free with your Eagle ID card.