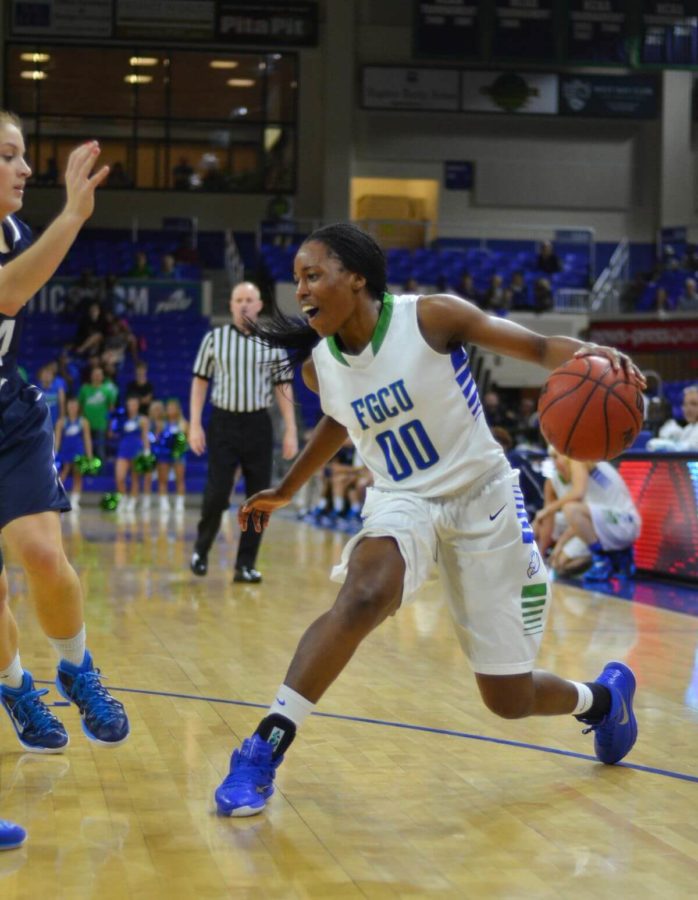 The Florida Gulf Coast University women’s basketball team left Alico Arena for the first time this conference season to take on Jacksonville University (6-10 overall, 1-2 in A-Sun confernece). A strong offensive performance gave the Eagles the 60-37 win, their 11th straight this season.  FGCU outscored their opponents in the second-half 36-14 to give them the convincing lead over the Dolphins.

The Eagles were led by junior Kaneisha Atwater, who dropped 14 points with seven rebounds and six assists. DyTeisha Dunson and Jenna Cobb also chipped in with double digits, scoring 11 and 10, points respectively. Dunson returned to the lineup for the first time in almost three weeks and opened the game with two straight 3-pointers.

Tough defense from the Green and Blue caused 19 Dolphins’ turnovers and the Eagles capitalized, scoring 26 points off of them. On the offensive side of the ball, 70 percent of FGCU’s points came from 3-point shots. They outshot the Dolphins with  39.6 percent from the field and 40 percent from downtown.

FGCU held just a one-point lead heading into the second half. A 10-2 run to open the half gave the Eagles momentum they would the remainder of the game. They made eight 3-pointers to add to their strong defensive play, eventually extending their lead to 23 points.

The Eagles bested Jacksonville on all major statistics in the game outshooting (39.6-36.6), outrebounding (31-26), and out-stealing (8-2) them. FGCU also turned the ball over seven less times than the Dolphins.

“Jacksonville was very physical and very aggressive and we had to match their physicality if we were going to be successful,” said coach Karl Smesko. “I thought we did a better job of that in the second half. I thought we did a great job defending in the second half as we didn’t give up open shots and made more defensive plays, which allowed us to get into conversion and get some easy baskets. I give Jacksonville credit. They were ready to play today and they were tough.”

Taylor Gradinjan, redshirt freshman for the Eagles, led the team with 26 points over its two wins last week. She dropped 17 points at home against North Florida and followed with nine against Jacksonville University. Gradinjan’s play earned her Atlantic Sun Newcomer of the Week honors. This is her second A-Sun accolade.

The Eagles will return to Fort Myers this weekend for a two-game series in Alico Arena. They will look to extend their win streak to 13 when they take on USC-Upstate Thursday night and Kennesaw State University on Saturday.