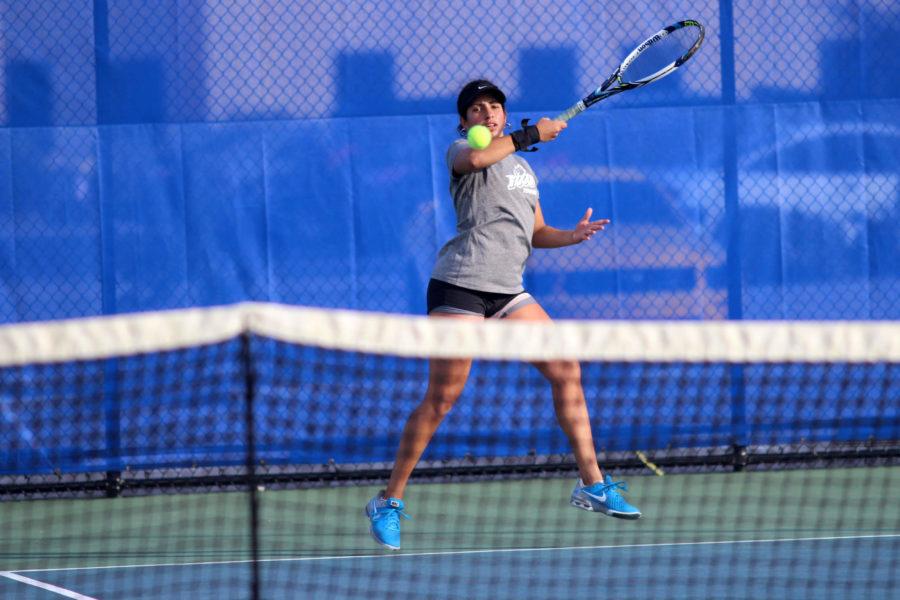 In a weekend of tough competition, the Florida Gulf Coast University women’s tennis team (1-4) gained insight into where it stands against tougher schools. The Eagles played Louisiana Tech (0-5) on Friday, Middle Tennessee (5-2) on Saturday and finished the weekend playing No. 67 Georgia State (3-2).
The team will play the University of South Florida on Feb. 10 at home and is using this week to work on the mental and technical aspects it struggled with this weekend.
“It is good to view the matches as a learning opportunity when it doesn’t go the way you want it to go,” coach Courtney Vernon said. “We played two very good teams, and were challenged mentally. We saw where we are when the going gets tough. Overall it was a very important weekend to see where we are at and to go from there.”
The Eagles started the weekend on a positive note with a 4-3 win over Louisiana Tech (0-4) on Friday. In doubles play, senior Sarah Means and junior Elizabeth Means defeated Tech’s Jazmin Britos and Alexandra Starkova 6-4. Junior Alex Landert and freshman Julianna Curtis secured the doubles point with a 6-1 win over their Tech competitors.
In singles, Tech gave the Eagles a run for their money. Sarah Means lost 6-2, 6-2 to Starkova and Breana Stampfli lost 6-2, 6-2 to her competitor. Elizabeth Means changed the momentum and defeated Tech’s Marta Sramkova 6-3, 2-6, 6-1. Junior Johanna Sterkel also won her match 6-4, 6-3.
The outcome of the match fell on Julianna Curtis after senior Candela Munoz Giron lost her match 6-2, 6-3. Knowing it was three all, Curtis focused on taking the match one point at a time to come out with a 6-4, 6-3 victory.
“I thought I stayed pretty calm,” Curtis said. “I got a little nervous at the end but then I finally came through and finished it off… After I hit the last two overheads and won the match, the team came out and was cheering.”
On Saturday, the team lost 7-0 to Middle Tennessee. The Eagles started off losing the doubles point and weren’t able to convert in singles. Sophomore Breana Stampfli came close in her match against Jesse Grace wining the first set 6-0 but losing the next two sets 2-6, 2-6. Elizabeth Means also came close in her match but lost 6-3, 7-6 (0).
After the loss against Middle Tennesse, the team regrouped that night to pump themselves up for the match against No. 67 Georgia State on Sunday.
“I just reminded the girls to ask themselves difficult questions as to why they are competing,” Vernon said. “It is a privilege to go out and play tennis. It is a gift and we need to keep that in the back of our heads. It is the challenging moments that make competing.”
In doubles play, the Eagles weren’t able to get the momentum going. Landert and Curtis lost their match 6-3 and Stampfli and Sterkel lost their doubles match 6-2.
Despite losing the doubles point, the team came off with two wins in singles. Stampfli defeated No. 69 Linn Timmermann 7-5, 7-6 and Sterkel picked up the next win over Georgia State’s Kristin Rehse in the 4-2 team loss.
The team is looking forward to competing against USF at home. The Eagles have a week to prepare after a weekend of back-to-back matches.
“We are going to continue to work on being aggressive and work on the mental part,” Vernon said. “Playing with a plan and sticking to that and just keep taking them along the path we have been on.”