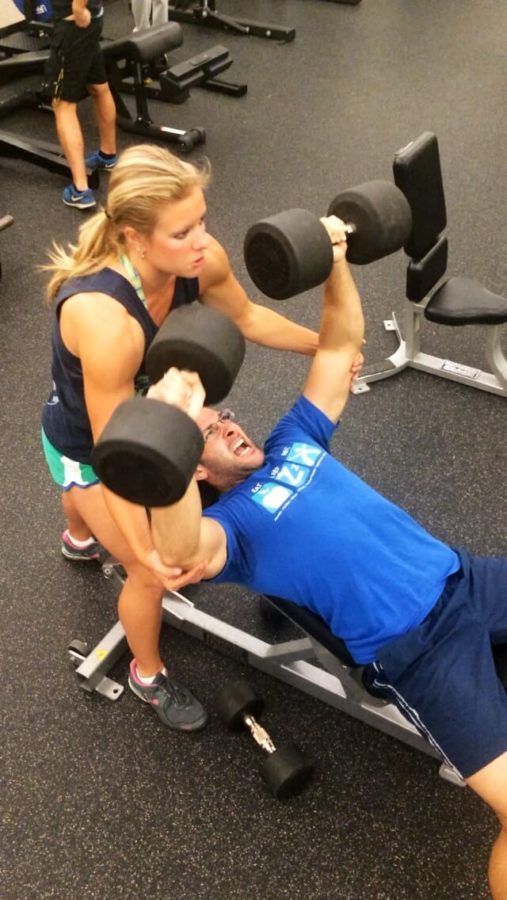 Lifting weights, doing cardio six times a week and counting calories has been the training plan of Stephen Giuffrida and Kathryn Brewer since the end of last year.
They’ve been dedicated and committed to their program to look their best by the end of March for a fitness competition.
The Health, Fitness and Bodybuilding Club at Florida Gulf Coast University is hosting an amateur physique show from 5 to 10 p.m. Saturday, March 28 in the Cohen Center Ballroom at FGCU.
The show will have three categories: most improved male and female, best overall male and female and male-female pair.
Brewer, a senior majoring in biology and vice president of the club, said that the purpose of the competition is to show that if you’re working on reaching a goal, be commited toward it. She trains with Giuffrida at least four to five times a week.
“You can reach a goal by yourself, but you are going to do a whole lot better if you have a team pushing and motivating you,” she said. “Without [Stephen’s] help, I wouldn’t be reaching my goals right now, I wouldn’t be able to push myself this much.”
Both of them did body weight and body-fat percentage measurements before they started their cutting season: losing weight and leaning up  to be as aesthetic, symmetric and muscular as possible for the show.
Brewer’s starting measurements were 162 pounds and 24 percent body fat. She has lost 14 pounds since then and her body fat decreased to 18 percent. She still has at least another 15 pounds to go till she reaches her goal — 135 pounds with eight to 10 percent body fat.
Giuffrida, a junior majoring in accounting and co-president of the club, pays close attention to the change of his body-fat percentage. He started with 14 percent and is working down to somewhere between 3 to 4 percent.
“I measure the change mostly by my body-fat percentage and by looking in the mirror and seeing the results there,” he said. “Not so much by what the scale shows.”
At the previous show the club put on this past September, Giuffrida took second place in the best overall male category, while Brewer took first place for best overall female.
Winning is in front of both of their eyes.
Brewer said there are 95 people signed up on their roster. But they are only anticipating half of them to compete.
Participants have three categories to sign up for and two of them have male and female subcategories.
According to the club’s Facebook page, best overall competitors will be judged upon symmetry, shape, proportion, muscle tone, conditioning and presentation. Judges are looking for the contestant with the best stage presence and poise who can successfully convey her or his personality to the audience.
The attire must be a bikini-style bathing suit for women and board shorts for men. Competitors will enter the stage without a shirt and barefoot, according to the club’s Facebook page.
Contestants in the most-improved category had to have a before picture taken in early January. At the show, judges will compare those pictures to how they look at the show and how their weight and body-fat percentage have changed.
“It’s the highlight of the show,” Brewer said. “It’s kind of our form of ‘Biggest Loser,’ but besides looking at their weight loss, we also focus on how their body composition and body-fat have changed. And the person who changes the most is the winner.”
Brewer said they added a new category for this spring show — male-female pair — because they want to contrast the different body types.
The duos will have to prepare a 60- to 90-second routine and have complementary outfits.
“It is highly suggested that pairs bring their own music,” Brewer said. “It doesn’t have to be a dance, perse, but it definitely has to be a coordinated, posing routine.”
It will be an amateur fitness competition, so organizers are not expecting competitors to have professional-level physiques. However, that doesn’t mean that the judges are not professional. In fact, they are, and they all have experience in competing or judging at a professional fitness competition.
The four judges are Laura DalSanto, owner of Bella Diva Fitness in Fort Myers; Renee Mattos, National Physique Committee bikini competitor; AJ Sims, NPC coach and co-owner of Team Sims; and Brady Nelson, owner of Complete Nutrition Cape Coral.
Nelson said he is very excited about the show. He has competed before, but this is his first time judging at a fitness competition.
“It’s always great to see young aspiring athletes at these events,” he said. “I think it’s a great gateway for anyone who is pursuing the health and fitness industry.”
The show is open to all FGCU students, faculty, staff and alumni.
All participants will receive a T-shirt and a Complete Nutrition prize package. The winners of each category will also receive a trophy.
The confirmed sponsors of the event are Complete Nutrition, Sphinx CrossFit and CrossFit Fireball. But organizers are still negotiating with more businesses, Brewer said.
Giuffrida said dedication and encouragement are very important as people are preparing for the show.
“People can learn a lot from entering the competition and also develop healthy patterns,” he said. “I think people work out for fun, but train for a purpose.”