These Eagles just keep on winning 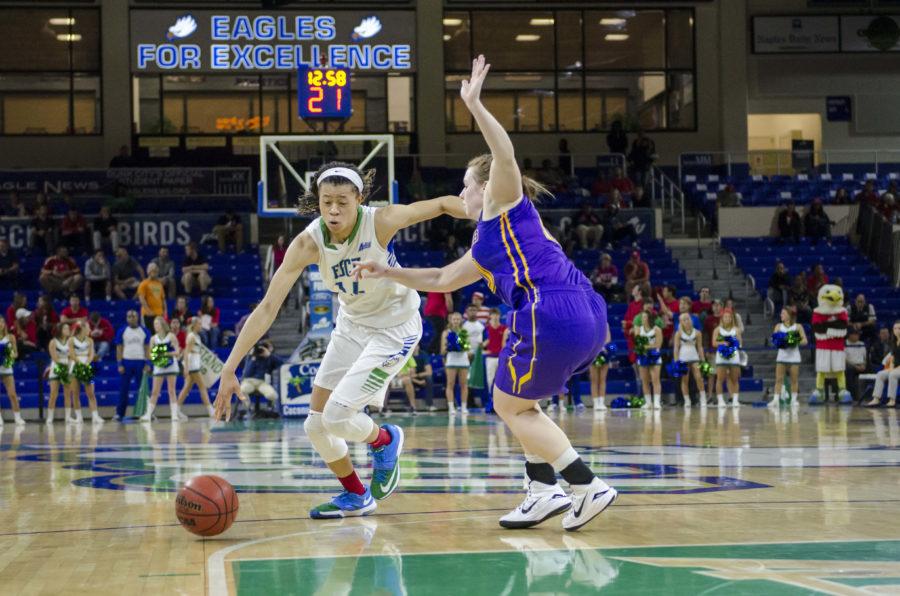 *Kameron Beach and Mark Pierre both contributed to this report

Cupid was not in attendance at Alico Arena this past weekend. It may have been Valentine’s Day, but there was no love between A-Sun conference-rival, Florida Gulf Coast University Eagles and the Bisons of Lipscomb University, when they took the court on Saturday.

The last time these two met, FGCU won at Lipscomb 71-49. Saturday was quite reminiscent of their last meeting.

From the opening tip, even with a slow offensive start from the Eagles, Lipscomb just looked downright outmatched. The Bisons just couldn’t stop the onslaught of the Eagles. FGCU was constantly attacking the basket and received little resistance from Lipscomb’s defense. This is evident in the fact that 42 of FGCU’s points came from inside the paint. “We were just stretching out and were able to see space and just get in there and attack and finish,” said Stephanie Haas, who came off the Eagle bench and finished with 11 points.

The final buzzer sounded with FGCU beating Lipscomb 69-43. FGCU’s Whitney Knight was the game’s leading scorer, finishing the game with 17 points. She also had 11 rebounds, giving her a double-double. The Eagles’ bench also had a notable performance, with non-starters scoring a total 22 points.

In the loss, some Lipscomb players had notable performances. Ashley Southern led her team in scoring, with 14 points. Though she went 2-12 shooting from the field, Emily Eubank tallied 7 assists.

In the victory, the women of FGCU made history. On Feb. 16, when The Associated Press released their weekly rankings, FGCU was sitting at 22. This is the first time in program history that the team has received a top 25 national ranking.

Next up, the Eagles hit the road to Georgia to take on Kennesaw State University. The last time they faced each other was on January 24 at Alico Arena. FGCU came out victorious with a final score of 61-47. With March only a couple weeks away, the team strives to continue their dominance, raise even higher in the rankings and continue to prepare for the A-Sun Tournament and, hopefully, the NCAA Tournament.

The night started with FGCU celebrating redshirt-junior Whitney Knight’s 1000th career point, and she continued to shine throughout. Knight had her way with the defense all game, finishing with 20 points including 4 made 3-pointers. On an isolation play near the end of the first half, Knight gave a wicked jab step to her defender who in turn went sailing to the ground, leaving Knight wide open for an easy 3. Knight also had a fast break layup where her hand stretched above the rim as she released the ball. She was asked after about adding the dunk to her skill set. Knight, who is 6-foot-3, shrugged it off after the game with a cool, “We’ll see what happens.”

The Eagles had very good spacing on the floor and their unselfish passing led to wide open shots all night long. The team finished with 18 assists, leading to 12 made 3-pointers on the night. Northern Kentucky had troubles all night keeping track of FGCU’s numerous shooters. When FGCU plays in such an offensive groove, they’ve proved very difficult to beat this year. “I know that coach makes an effort all the time to make sure we’re focused, giving great effort, executing on offense, we’re intense on defense. We’ve been trying to do that and I think it showed tonight,” Knight said. FGCU guards Kaneisha Atwater and Stephanie Haas dropped in 13 points each, also contributing to the Eagles success.

FGCU coach Karl Smesko was pleased with the win but still has eyes on focusing for the future. “We’ve played really good basketball in stretches,” Coach Smesko said. “There’s still a lot of room for improvement for us, and that’s the attitude that we’re taking. Trying to get ourselves as prepared as we can for this ending stretch and then for March.”