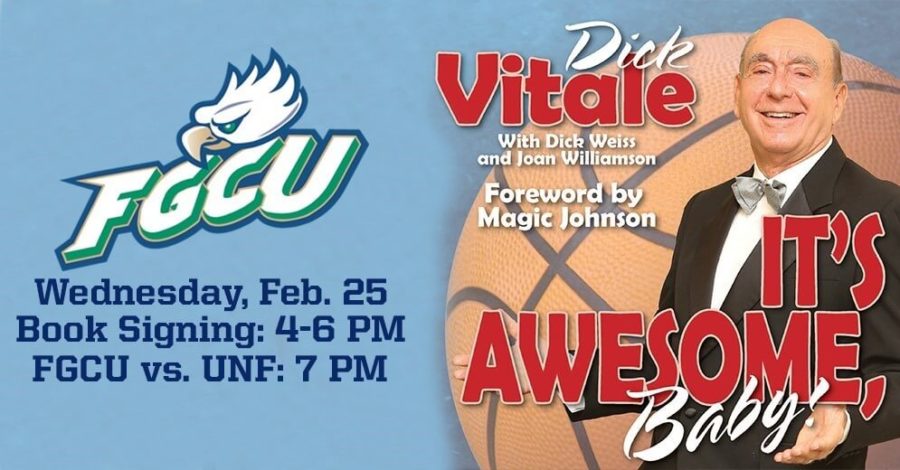 DUNK CITY, Fla. – Dick Vitale, college basketball’s most recognizable analyst and ambassador, will visit FGCU on Wednesday, Feb. 25, starting at 4 p.m. in the Alico Arena Auxiliary Gym to sign copies of his new book and attend the men’s basketball team’s game against North Florida in what is shaping up to be a battle for the Atlantic Sun Conference regular-season championship.
Dickie V will sign copies of “It’s Awesome Baby! 75 Years of Memories and a Lifetime of Opinions on the Game I Love” from 4-6 p.m. only. The hard-cover book is on sale for $28.95 online by clicking here or also by calling Denise Da Silveira, Assistant AD for Marketing & Sales, at 239-590-7060.
Advance purchasers will be admitted into the book signing via an express lane, guaranteeing them quicker access to Vitale. Additional copies will be available the day of based on availability. Proceeds from the book signing benefit The V Foundation for Cancer Research, and in particular children who are battling cancer.
Following the book signing, Vitale will remain at the arena to meet and greet FGCU fans and students before taking in Dunk City’s game against UNF at 7 p.m. FGCU is currently 19-7 overall and in first place in the A-Sun with a 9-1 record, one game ahead of UNF (8-2 A-Sun, 16-11 overall).
The regular-season home finale will also be Senior Night for Brett Comer (Winter Park, Fla./Winter Park HS), Bernard Thompson (Conyers, Ga./Rockdale County HS), Jamail Jones (Atlanta, Ga./Montverde Academy/Marquette), Nate Hicks (Panama City Beach, Fla./J.R. Arnold HS/Georgia Tech) and Marcus Blake (Miami, Fla./American Heritage HS).
In his book, the ESPN commentator speaks about the game, his life and his fondest memories in this special memoir celebrating his 75th Birthday. “It’s Awesome Baby!” is packed with never-before-published, behind-the-scenes color photos throughout to take the reader inside the storied career of one of sports broadcasting’s true legends.
Vitale has coached at every level from junior high to the NBA. He was inducted into the Naismith Memorial Basketball Hall of Fame in 2008. Vitale has also been honored with the Curt Gowdy Media Award and several Ace Cable Awards for outstanding television commentary.
The V Foundation – formed in 1993 by ESPN and former college basketball coach Jim Valvano – is one of the nation’s leading cancer researching funding organizations, and the one which is most near and dear to Vitale. In nine years, the annual Dick Vitale Gala has raised more than $12 million for pediatric cancer research. For those interested, additional cash or check donations will be accepted at the event on behalf of The V Foundation.
Sponsors for the evening – SWFL friends of The V Foundation – include: Dr. Patrick Flaharty, Anesthesia & Pain Consultants of SWFL, The Petracco Wealth Management Group of UBS Financial and FGCU Department of Athletics.