The Eagles are the 2015 CCSA champions 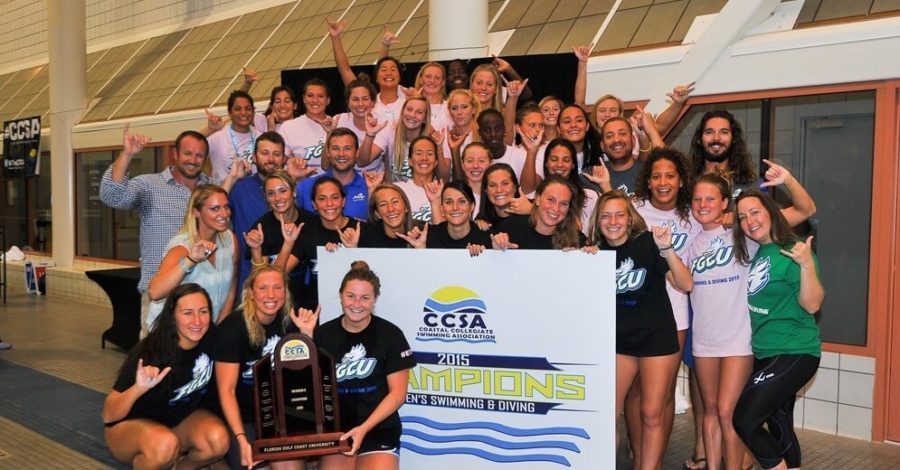 The Florida Gulf Coast swim and dive team will send a record eight swimmers to the NCAA Championships next month after reclaiming the Coastal Collegiate Swimming Association (CCSA) Championship title over the weekend.
After holding the title for five consecutive years, the Eagles lost the title last season to Liberty University due to a disqualification in one of FGCU’s relays. With the goal of reclaiming the title as their motivation, the Eagles dominated the championships.
“I think we were better prepared,” Coach Neal Studd said, mentioning the closing of the FGCU Aquatic Center last season that forced the team to relocate practices and meets. “The commute every day, even though it was only 15 minutes, twice a day really took a toll. Then if it was a nice day, the pool was open to the public, and we could only work with maybe four lanes. Now I have 20. We had a great year last year and just made some mistakes. It was a factor, but you can’t blame the pool for everything.”
Not only did the Eagles qualify as NCAA “A” cuts for both the 200 and 400 medley relays, an impressive feat for any mid-major school, they did it while also setting records. The 400 medley broke a CCSA, CCSA Championhip meet and an FGCU program-record with a 3:34.11 time. The 200 yard medley broke an FGCU program-record with a 1:37.17 time.
The 200-medley consisted of Emma Svensson,  Kira Toussaint, Katie Armitage and Rebecca Derogatis. The 400 medley consisted of Toussaint, Armitage, Svensson and Yee Wong.
“Having a mid-major school qualify for relays is a huge deal,” Studd said, “Maybe one or two schools a year put a mid-major up, so that’s exciting.”
Armitage also qualified for a “B” cut in the 200 yard breaststroke with a first place and time of 2:13.05. FGCU captain Nina Schiffer joins Armitage with a “B” cut in the 200 yard butterfly with a winning time of 2:13.05.
Svensson lead the Eagles with a first place in the 50-and 100-yard freestyle and first in the 100-yard butterfly. Svensson also broke CCSA, CCSA championship and FGCU program-records in all three while qualifying for NCAA “B” cuts. With the wins, Svensson earned the Women’s Most Outstanding Swimmer of the Meet.
“I think (this season’s success) is because of the motivation from last year’s loss, the amount of talent that’s come in with our freshman class and improving the upperclassmen we already have,” Studd said. “If we can do that every year you’ve got a great thing.”
The qualifying Eagles will travel to Greensboro, North Carolina, on March 19 to swim in the NCAA Championships.