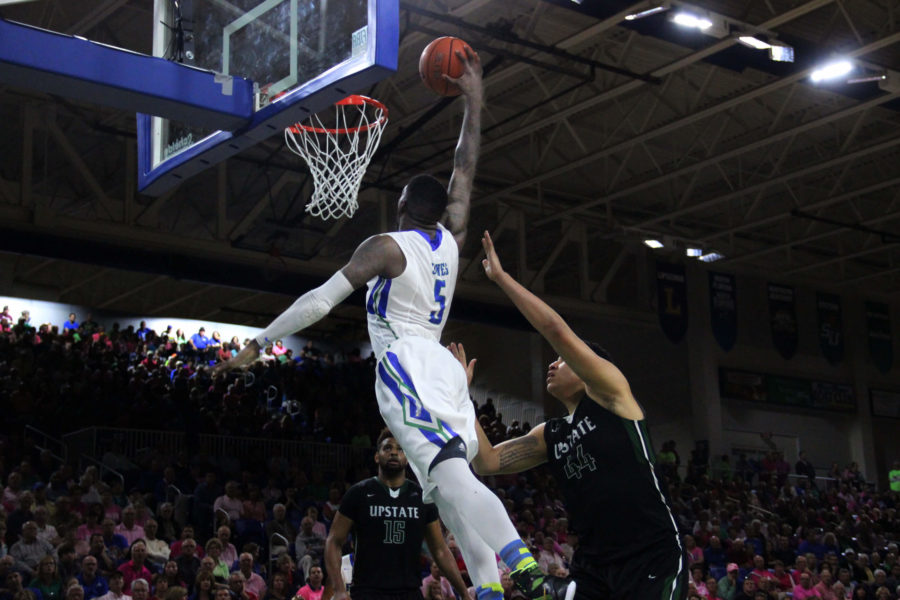 The Florida Gulf Coast University men’s basketball team is entering the most crucial stretch of its season with a chance to clinch its second consecutive Atlantic Sun title.
The Eagles’ season has been defined by hot and cold streaks, yet they find themselves with an opportunity to take home the A-Sun regular-season championship for the second time in as many years. If FGCU can manage a win over North Florida on Wednesday night, the Eagles will clinch the conference and lock up the number one seed and home court advantage throughout the A-Sun tournament.
In the first meeting between these two teams, UNF took it to the Eagles in front of a sold-out and incredibly rowdy crowd, handing the Eagles their only conference loss, 80-64. The Eagles are hoping to have the same home-court advantage at Alico Arena on Wednesday.
“We have a great atmosphere,” Coach Joe Dooley said of FGCU’s home-court advantage. “There’s some games at some high, high-level schools that there’s nobody there. The support of the community has been unbelievable, the crowd noise and the atmosphere is big-time so hopefully our students come out. I know our students will be ready, and I know our fans will be ready.”
In addition to the excitement for the game itself, ESPN’s Dick Vitale will be making an appearance at Alico Arena to promote his book, “It’s Awesome Baby!” Vitale is a fan-favorite of college basketball fans everywhere and the opportunity to meet the legendary TV personality offers even more of a draw to fans.
But despite the excitement and anticipation, there is no escaping the fact that FGCU got beat quite handily in the last meeting between these two teams. The Eagles know that there are multiple adjustments that need to be made in order to ensure that the result is different this time around.
“Last time, I think they took advantage of some things,” Dooley said. “We usually guard the three-point line a little better than we did that night. They stretched us out and made threes, and we had our hands full, obviously.”
In the first meeting, FGCU allowed UNF to shoot 48 percent from long range, a number that will have to drop significantly in the second matchup. On the season, FGCU leads the nation in three-point field goal defense, allowing opponents to make just 26.2 percent of their attempts, a stark contrast from the poor perimeter performance against UNF.
In addition, 80 points is the second-highest total points against the Eagles in a game this season, and that number will need to fall as FGCU averages just 67.3 points per game. Very seldom do the Eagles allow opponents to score more than 70 points, and breakout performances from three key members of the Ospreys had a big part in FGCU’s struggles in the last contest.
UNF guard Dallas Moore exploded for 27 points in the last meeting, with seven of those coming off of free throws. In addition, Demarcus Daniels and Trent Mackey both scored in double-figures for UNF, giving them one of their most well-rounded offensive performances of the year. If FGCU hopes to take the second meeting of these two teams, stopping this prolific trio will need to be a top priority.
“I think we’re going to come out with a fire,” senior guard Brett Comer said. “[We’re going to] bring some energy and be excited to play.”
The Eagles will then finish their season by traveling to Jacksonville for a matchup with JU in their final conference game of the season. The Dolphins are currently 3-9 in the conference and 9-20 overall, a much more modest opponent than the Ospreys, who are 10-2 and 18-11 overall.
If FGCU can manage a win against UNF, they will clinch the regular-season conference championship, making the result of the game at Jacksonville irrelevant to the playoff seeding. In the first meeting of the two, FGCU coasted to a 79-50 win at home, and the second contest should be very similar. Look for the Eagles to finish strong with two wins this week, ending the regular season at 13-1 and hosting the Atlantic Sun tournament games at Alico Arena for the second straight year.
“It’s been an ongoing process,” Dooley said. “We were just hoping to clean it up by the end of the year.”
And clean it up, they have.