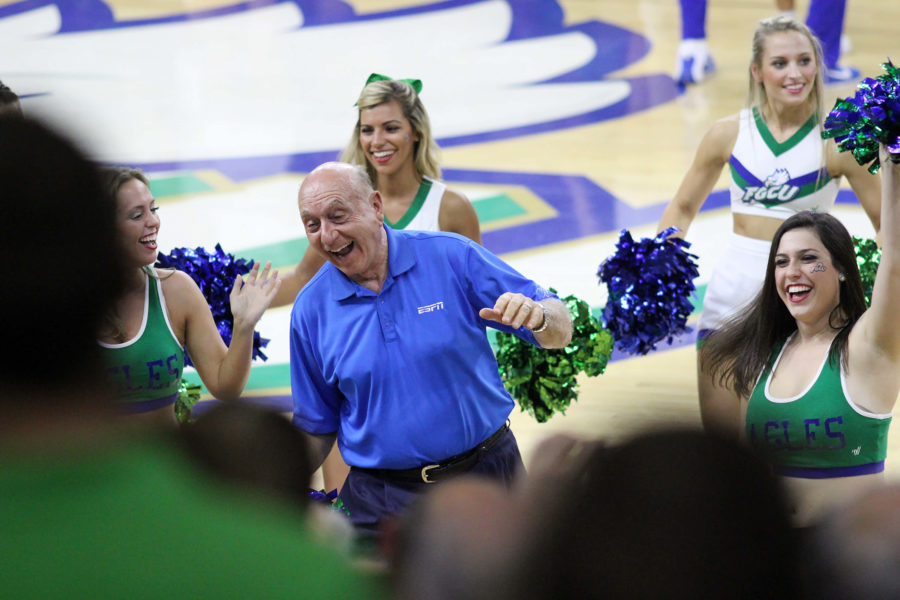 Florida Gulf Coast University has seen plenty of famous people come out to Dunk City to watch the Eagles play at Alico Arena this season. Dick Vitale came to visit Southwest Florida and FGCU Wednesdaynight for a book signing and a basketball game.
“I wish I would have thought of ‘Dunk City,’” Vitale said. “I’ve never been here before for a game. I’ve enjoyed the atmosphere.”
Vitale currently lives in the Lakewood Ranch area about 90 miles north of Fort Myers. He was also very appreciative of the school and the job Joe Dooley has done in two years in charge of FGCU men’s basketball.
“Joe Dooley is a solid tactician,” Vitale said.
Vitale is not just a broadcasting icon. He is also a well-known author of nine books. His latest book “It’s Awesome Baby” celebrates 75 years of memories and a special lifetime of opinions on the game that he loves.
In the book, Vitale talks about the game, his life and his fondest memories in this special memoir celebrating his 75th Birthday. “It’s Awesome Baby!” is packed with new scenes and new color photos to take a look inside the storied career of one of sports legendary people.
“I’ve shared a lot of personal stuff in the book,” Vitale said.
Advance purchasers were guaranteed a quicker access to meet Vitale and have their books signed by him. Additional copies were available the day of the game and were based on the availability of the book. Over 200 people got the chance to have Vitale sign their books. Proceeds from the book signing will benefit The V Foundation for Cancer Research, and in particular children who are battling cancer.

Vitale remained at the arena to meet and greet FGCU fans and students before taking in the game against UNF at 7 p.m. to decide the A-Sun regular season.
He was also there to see FGCU honor Brett Comer, Nate Hicks, Bernard Thompson, Jamail Jones and Marcus Blake before their last regular-season home game.
Before arriving at ESPN, Vitale coached at Garfield and East Rutherford High School in New Jersey. He later became the head coach at the University of Detroit before becoming the head coach with the Detroit Pistons in the NBA.
After his relationship ended with the Pistons, Vitale became part of ESPN’s broadcasting team in 1979. He has remained with them ever since calling over 2,000 games with ESPN.
He was inducted into the Naismith Memorial Basketball Hall of Fame in 2008. Vitale has also been honored with the Curt Gowdy Media Award and several Ace Cable Awards for outstanding television commentary. During that time, he has seen everyone play from Michael Jordan to LeBron James and FGCU’s Comer.
“There are only about 380 people to wear that ring. I’m lucky to be in the Hall of Fame,” Vitale said.
Vitale is also a major part of the V Foundation raising money for cancer research. Vitale is one of most impactful people leading the fight against cancer. In nine years, the annual Dick Vitale Gala has raised more than $12 million in the fight for pediatric cancer research. The V Foundation was formed in 1993 by ESPN in honor of former North Carolina State college basketball coach Jim Valvano.
Like FGCU, Valvano led NC State on a memorable run in the 1983 NCAA Tournament leading the Wolfpack to the title.