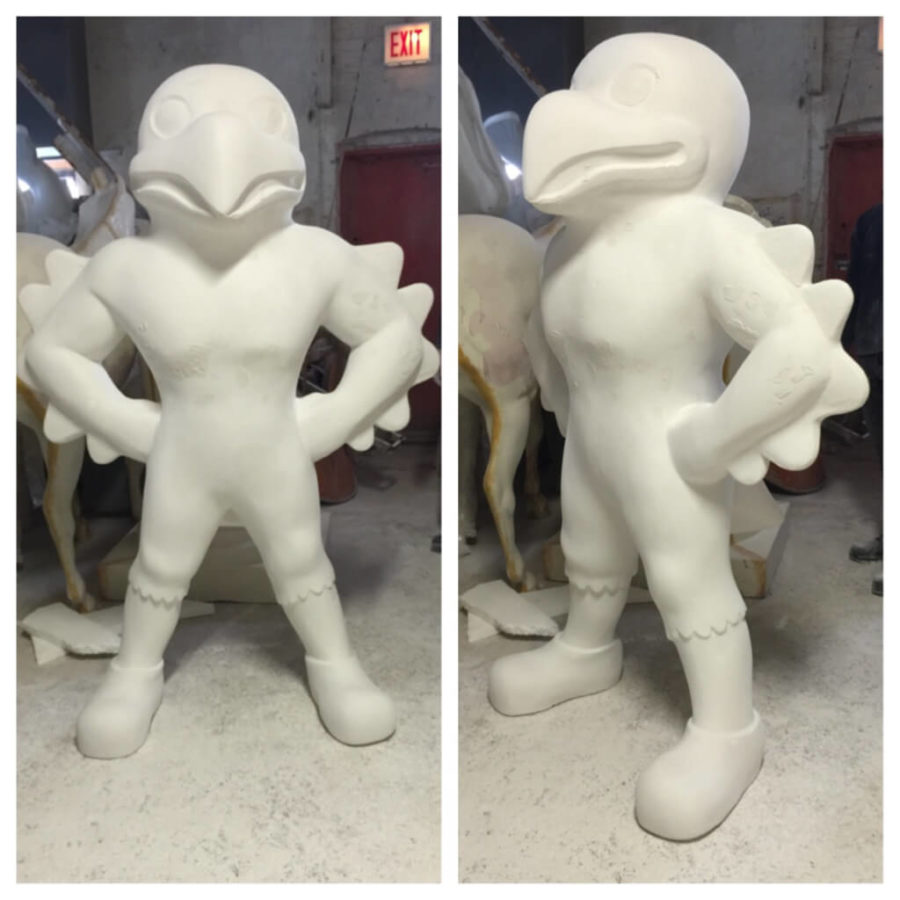 The term “starving artist” is one that Geoffrey Stephens, a senior majoring in journalism, related to all too well. When he heard about Florida Gulf Coast University’s Azul’s Flight Tour, he jumped on the opportunity to let his creative juices flow.
Azul’s Flight Tour was brought to fruition back in August when Student Body President Domenic Volpi and Vice President Cory Mentzer wanted to promote school spirit on campus. Drawing from a project done at Iowa University, the pair came up with the idea to create an Azul model for six fiberglass statues that could be designed and placed on campus.
“I started doing this back in August,” Mentzer said. “We had the first meeting on Sept. 26 and it has taken a really long time, but I am happy with the success of it so far. It will be a pretty cool thing to bring to the university and to the community as well.
Stephens’ sculpture will be a mosaic of pictures of students, faculty, buildings and places all around campus that he will take himself then attach in a color-coded manner to fill in Azul.
“My first idea was to construct all of the little pieces it takes to make the big,” Stephens said. “Sort of like the ‘little drops in the bucket to fill it up’ type deal. That was what I was going for.”
Six artists, including Stephens, picked up their statues by March 5 and have until March 30 to submit his or her completed statue. Stephens said the 6-foot tall, 140-pound sculpture takes up half of his bedroom.
“I had the dimensions, but it is much bigger in the respect that Azul has been hitting the gym,” Stephens said. “He has definitely been pumping iron.”
Mentzer, Volpi, Vice President of Student Affairs J. Michael Rollo, President Wilson G. Bradshaw, Athletic Director Ken Kavanagh and Art Gallery Coordinator Anica Sturdivant were on the committee that selected the designs. There were 20 to 25 submissions for the committee to choose from.
“We were just looking for things that would represent FGCU well,” Mentzer said. “We wanted designs that embodied FGCU and would be visually pleasing to the eye. When you come on campus, we want you to take a picture with it.”
Andrew Corke graduated from FGCU in 2012 and is using used bicycle tires to create his statue. Scott Guelcher obtained his master’s in education at FGCU and will highlight FGCU baseball in his design. Diana Rochez, a junior at FGCU majoring in biology, is incorporating basketball into her design. Colleen Solomon, a Cape Coral resident who follows FGCU’s basketball teams, is designing a “Spartan-like” Azul.
Corke used the contest to promote his artistic style that relies heavily on using recycled materials. For the project, he is cutting used bicycle tires into feather shapes, arranging them onto the statue with glue and then painting them so they look realistic.
“Hopefully by viewing my art, I motivate others to find ways to recycle,” Corke said.
Once the sculptures are finished, they will be taken to an auto body shop where they will be lacquered to protect them from the weather as best as they can. The process will take about two weeks.
There will be a reveal party in mid-April on campus where the completed statues will be shown to students, staff and the public. After that date, the statues will be placed around campus and Alico Arena based on their designs.
“I am the artist guy with the ponytail and ride my bike everywhere,” Stephens said. “I have experienced the ‘starving artist’ lifestyle… It is very satisfying to know that someone has looked at your artwork and idea and has approved it.”