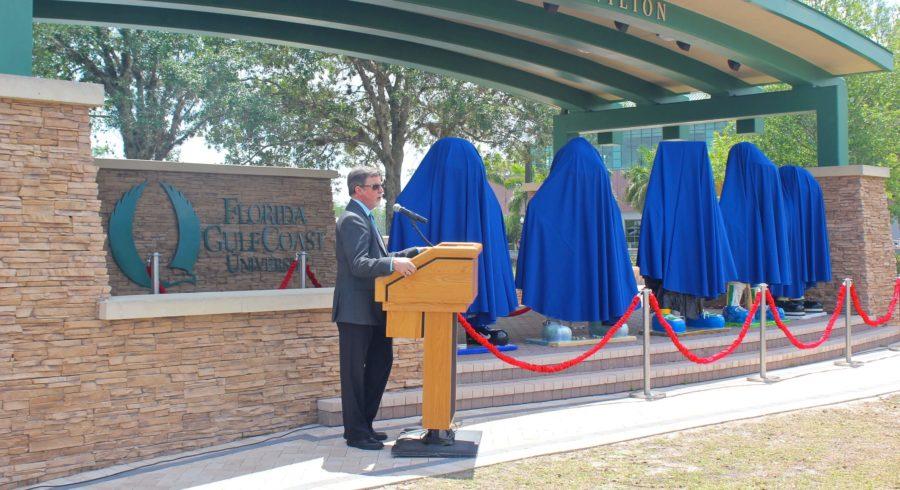 The world met the winning statues of Azul’s Flight Tour at 1 p.m. Tuesday, April 14 on the library lawn.

Azul’s Flight Tour was a contest open to artists on campus and in the local community to submit designs and paint a statue of FGCU’s mascot.

“Basically other universities have done it in the past, University of Iowa and the University of Florida, and with Domenic’s full support on me I went ahead with the initiative,” Mentzer said.

“I met with Chris Simoneau, the vice president of Advancement, got him on board and I had Dr. Rollo’s backing,” Mentzer said. “The idea was brought to the President’s cabinet and with their support everyone was on the same page. That was basically how Azul’s Flight Tour was born.”

The winners were selected by Volpi, Mentzer, Vice President of Student Affairs Michael Rollo, Athletic Director Ken Kavanagh and art gallery coordinator Anica Sturdivant. The winners will be paid $1,000 each.

The overall goal is that in 2017, for FGCU’s 20th anniversary, all of the statues will go up for auction. All of the money raised in the auction will go toward scholarships.

“Some local businesses have already inquired about wanting one,” Mentzer said. “So there’s a potential that we will have another contest in the near future or so forth and maybe open it up and have the Azuls out in the public, but as of right now they are only on campus.”

According to Rollo’s speech at the reveal, 16 designs were submitted and six were chosen. The statues will be placed around campus in various locations, but not all of the locations have been determined yet.

“Students can take pictures with them, and people who visit the university will be able to see them — it will be sort of an attraction for them,” Mentzer said.

Solomon created an Azul that will be installed in Marieb Hall and is titled “We Bleed Green and Blue.”

Stevens has not finished his Azul quite yet but it is titled “Peaces of the Nest.” This statue will be placed in the Cohen Center upon completion. Stevens’ statue is comprised of hundreds of photographs of FGCU students, staff and faculty.

Guelcher, an FGCU alumnus and baseball fan, titled his Azul “Azul Flies Around the Bases.”
According to Rollo, Guelcher was also offered a special contractual project for another statue after they realized there wasn’t an “Academic Azul.” Guelcher agreed and created another Azul titled “Graduation.”

Corke titled his piece “Never Tired of Winning,” and used recycled bicycle tires and other materials to create it.

Diana Rochez, a junior biology major, created an Azul titled “Dunk City” as a tribute to her Sweet Sixteen memories.

“I’m hoping to enter the next contest and make another Dunk City Azul but with a different style,” Rochez said. “It was an awesome opportunity.”

“Overall, I feel very accomplished, not necessarily for myself but just for the university,” Mentzer said. “It will help promote school spirit along with all of the money going toward scholarships, which will benefit students in that regard as well.”