To the victors come the spoils: A look at how FGCU coaches’ wallets are growing with continued success 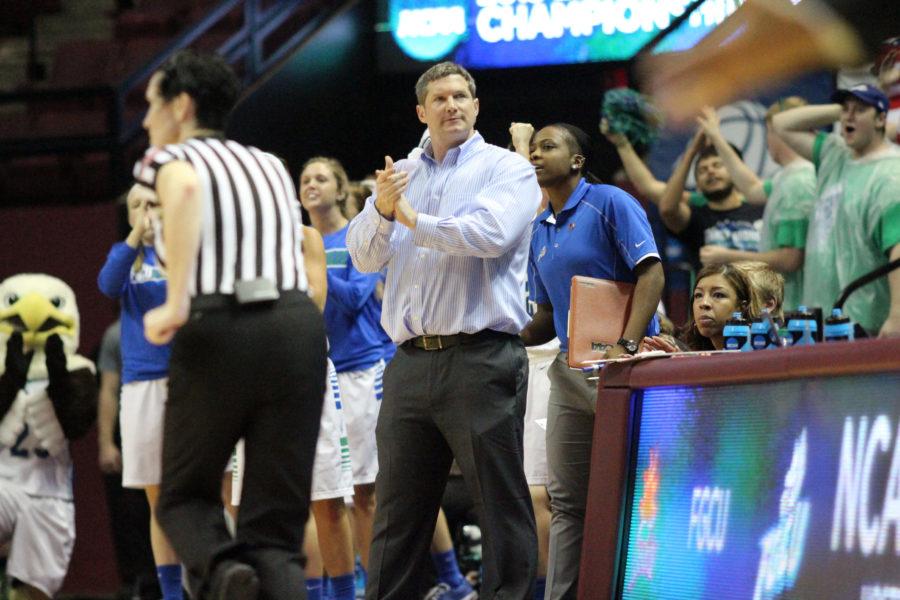 The classic line that everyone remembers in Jerry Maguire is, “Show me the money,” and with the recent success of FGCU Athletics, the University’s coaches have the ability to make the same statement.
Since 2013, four of the 12 FGCU’s head coaches’ salaries have increased more than 10 percent. The highest jump has been in the men’s head basketball coach position, which increased 32 percent in the past two years, according to public records Eagle News requested from university spokeswoman Susan Evans. That jump, of course, is because of the program’s historic Sweet Sixteen run.
Since becoming NCAA Tournament eligible in 2011, six FGCU teams have made an appearance in the NCAA Tournament — including men’s tennis’ first appearance May 8 — with three winning a game in the tournament.
“We are collectively just very proud,” FGCU Director of Athletics Ken Kavanagh said. “The opportunity to represent FGCU is something that we take very significantly. We know that we are helping grow the university and gaining recognition in a positive fashion.”
Both the men’s and women’s soccer teams have appeared in three of the last four NCAA Tournaments, earning coaches Jim Blankenship and Bob Butehorn each a salary increase of 3.4 percent ($2,450 more) to $72,450.  Eagle News also looked at records of the University of North Florida, a school similar to FGCU in size, and UNF’s men’s soccer coach Derek Marinatos’ salary only increased $1,000 in the past two years, while women’s head coach Robin Confer was lured from SEC powerhouse University of Georgia, resulting in a $15,000 salary jump in that time.
Softball coach Dave Deiros led the Eagles to regionals in 2012 and knocked off the then nationally-ranked Florida Gators. The past two years,  Deiros and the Eagles have won 36 and 33 games, respectively, which helped his salary jump 9.5 percent ($7,675) to $81,544. UNF’s Marcie Hickey had her salary hike by $14,650 over the last two years with an impressive 42-15 record in 2013.
Women’s basketball head coach Karl Smesko has led the Eagles to two straight NCAA Tournament appearances including a win this year against Oklahoma State in the first round. Smesko’s continuous accolades increased his salary by 17.8 percent ($40,000) to $225,000.  UNF’s women’s head basketball head coach Mary Tappmeyer had her salary go down $24,000 during the past two years after two losing seasons, which resulted in her not getting her contract renewed this March.
FGCU men’s basketball head coach Joe Dooley came in after the NCAA Tournament run in 2013, but the 32 percent increase at the position resulted in a $74,250 raise to $231,750.
These monetary gains are flowing throughout the Atlantic Sun Conference with March Madness runs by FGCU and Mercer, but losing can hurt your salary as well. North Florida’s Matthew Driscoll’s salary plummeted $46,180 after two .500 or lower seasons in a run before the program’s recent tournament run. Eagle News could not confirm at press time whether any of UNF’s salaries might have gone down because the contracts may have been front-loaded and changed after two years.
“We have board achievements that coaches can earn if recognized on a conference, regional and national basis for their overall performances,” Kavanagh said. “We definitely want to stay the best we can within our resources at FGCU and competitive within the marketplace. We want to make sure our coaches are compensated relative to who their peers are,” Kavanagh said. “In some cases, that’s going to be the A-Sun or more regionally and nationally depending on how the program has evolved. We want to be in a position where we are not only treated people fairly but proactive that we don’t have coaches aiming for somewhere else to go. Certainly, we could have coaches that could leave us for a combination of factors, like Coach (Andy) Enfield did, where there’s an opportunity to be at another level in total resources and compensation that we can’t come close to.”
Of the other eight FGCU head coaches, seven have seen salary increases since 2013, with four rising 5-plus percent.
The old saying “Winning means everything” is wildly believed to hold true in the sporting world, but holds a different meaning at FGCU.
“If you’re talking about winning at all costs in terms of the scoreboard, no, winning does not mean everything,” Kavanagh said. “If you’re talking about winning in the bigger picture of producing success overall by doing your best for us, it’s academically, athletically and with our community service initiative. That’s how we gauge ourselves.”
As the university grows, so does the athletic department, and the future of the programs and their coaches’ wallets look to keep growing.
“The Sweet Sixteen run was beyond anybody’s expectations and dreams, but for us to be able to so quickly put FGCU’s name out there — not just Florida Gulf Coast University, but for people to know us now by four letters,” Kavanagh said. “It has been demonstrated with the applications to the university rising significantly and test scores going up that enhance the quality of these new freshman classes.”