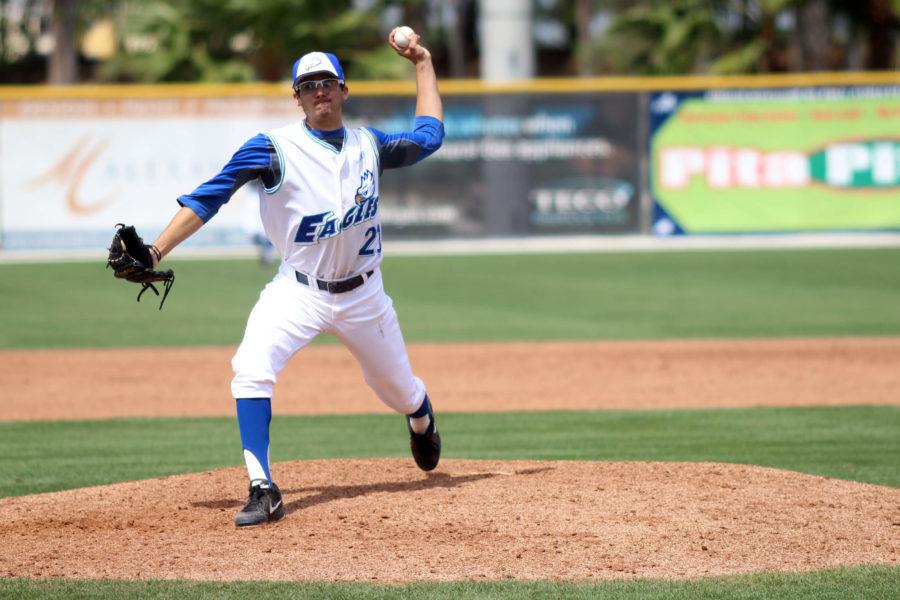 Florida Gulf Coast University will take a break from A-Sun action and face Massachusetts for a four-game series beginning April 24. This will include a double header on Saturday afternoon.
This will be an opportunity for FGCU to get a few wins before ramping it up for the end of the regular season. The Eagles are coming off a 1-2 week. They started by losing to Florida Atlantic on Tuesday night. They were supposed to face Kennesaw State for three games. Rain delayed Friday’s game to a Saturday doubleheader. FGCU split the doubleheader. Sunday’s game was cancelled by rain. The Eagles now have a record of 20-19-1 with a 7-4 mark in A-Sun play.
UMass has a record of 11-14 with a 7-8 mark in Atlantic 10 play. The Minutemen were swept by Saint Louis.
Teams need good coaches to help win games. They make decisions that often win or lose games.
Mike Stone is the head coach of UMass. He is in his 28th year in charge of the Minutemen. He posted his 650th career win earlier this year.
Dave Tollett is in his 13th year in charge of FGCU. Tollett has amassed 454 wins as the only baseball coach ever at FGCU.
These two teams will be facing each other for the first time ever this weekend.
UMass is led offensively by Kyle Adie. He leads the team with a .347 batting average. He also has 34 hits, five doubles and two triples.
FGCU is led at the plate by Nick Rivera. He has been the main power bat for the Eagles in 2015. He is tied for fourth in the A-Sun with seven home runs. Rivera also is fourth in the conference with a .372 batting average. He also is second to Donnie Dewees of North Florida with 45 RBI in 2015.
UMass will need Ryan Moloney to pitch like an ace this weekend. He is 2-3 with a 4.30 ERA in 2015. He has struck out 22 batters in 37.2 innings this season.
Maloney was not very good in his last start against Saint Louis. He took the loss after allowing seven hits and six runs.
FGCU will need Michael Murray and Brady Anderson to be good this weekend in order for the Eagles to win.
Murray has been inconsistent this season for FGCU. He is 3-5 with a 4.05 ERA in 66.2 innings this season, Murray does rank first in the A-Sun with 71 strikeouts. Murray was the losing pitcher, allowing four earned runs in his last start against Kennesaw State.
Brady Anderson has been a steady pitcher for the Eagles in 2015. He has made a significant impact as a starter and reliever. Anderson is 4-0 with a 3.73 ERA in 62.2 innings this season.
Defense has been an issue all season. Both teams have been making mistakes in the field. The Eagles have made 61 errors in 2015. The Minutemen have made 34 errors in 25 games.
The Eagles will take on Florida Atlantic before returning to A-Sun play at home against Lipscomb starting May 1.