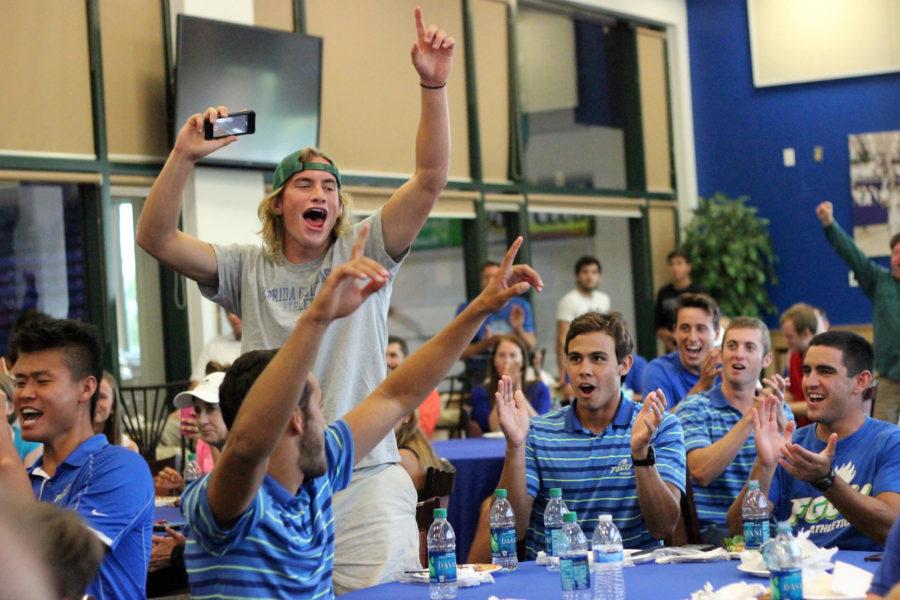 After a 17-5 record and winning its first ever Atlantic Sun championship, the Florida Gulf Coast University Men’s tennis team will head to Southern California to face the UCLA Bruins in the first round of the NCAA tournament at 4 p.m. est, May 8.
“We’re really, really excited about this matchup,” FGCU head coach CJ Weber said. “We get to go to a new place, so that’s exciting. This is a great opportunity for our program and I’m so proud of my guys. We have a really awesome group of guys to make this the first experience for FGCU going to the NCAA tournament.”
The Bruins finished the year 15-9 with a 5-2 Pac-12 record. The Bruins made it to the Pac-12 semifinals where they fell to USC 4-1.
“That program has won national championships and the athletic department is one of the most successful athletic departments in the country,” Weber said. “But in our short history, I think we’re one of the more successful athletic departments in the country. I’m really looking forward to the challenge and I’m expecting good things out of my guys.”
The Eagles, especially senior Jordi Vives, are familiar with Southern California. The Eagles traveled to Southern California the first week of March to face-off against Cal Poly, UC Santa Barbra and UC Irvine, where they went 1-2.
“I think it’s nice to have some familiarity to the trip,” Weber said. “But it’s a new place. It’s a new experience for sure.”
It’s a new experience for everyone but Jordi. Vives played his freshman year at USC, UCLA’s rival, where he won a national championship.
“I made the best decision of my life coming here to FGCU,” Vives said. “We will be going on a business trip, that’s what we call them. We’ve already been there. We know how everything looks. We’ve been to LA.”
Vives is 20-2 this year in single matches and 19-4 in doubles matches.
“I like Jordi against anybody,” Weber said. “I’m sure Jordi will be very excited for this opportunity. I know he’ll remember those days at USC and although he might not have played, I think this will be a unique opportunity for him.”
FGCU enters the NCAA tournament on an 11-game win streak. The Eagles haven’t dropped a match since March 5th of this year.
“I came here four years ago and our team was like 4-18. We weren’t in very good shape and now getting to the NCAAs is the result of a lot of hard work over the last four years.” senior Tianyu Bao said. “But this is when the season counts, and this is when you have to play good, and we’ve done really well and we’re in a situation right now that is just great.”
Bao, along with Vives and Michael Beiler, are the three seniors on the team.
“It was incredible. I dreamt of something like that forever,” Beiler said. “To be there watching our team show up on the board is crazy, it was definitely rewarding. It’s cool to think that I knew coming here that I would help trailblaze the program of the future and I didn’t know if I would experience the success in my time here. It happened a lot faster than anyone expected.”