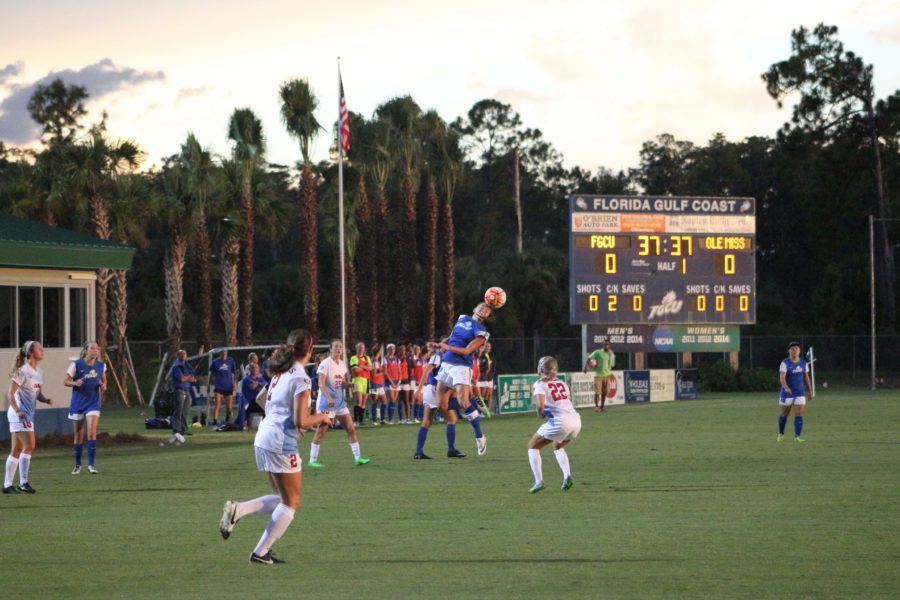 It continued to rain, as the FGCU women’s soccer team kicked off its season opener thirty minutes late, following a lightning delay on Friday night.
After exciting exhibition play last week, the FGCU women’s soccer team opened its 2015 season with a home game against Ole Miss.
Neither team walked away with the victory after a scoreless game and sudden death overtime that lasted 20 minutes. The draw against the experienced Ole Miss, after 110 scoreless minutes, frustrated some and tested the Eagles readiness for the season.


A corner kick within minutes of kickoff by FGCU’s Ali Rogers forced Ole Miss to get aggressive early. The teams were evenly matched, fighting for possession nearly the entire game. This was the first time the two teams had ever met.
“They’re a good team,” said FGCU midfielder Ally Kasun. “I felt like we could’ve done a better job controlling the ball. Overall, I’m proud of the effort the girls made. It’s not a loss, but we have a lot we can work on.”
“We didn’t lose and for a majority of the game we had the play, which was nice,” said head coach Jim Blankenship. “Late in the overtime we started giving up a lot of territory. We didn’t finish it the way we were hoping.”
The Eagles were 17-4 overall last season. Their recent success is well noted and was challenged by the Rebel’s copious collegiate experience.
Ole Miss has one of the most experienced teams in the country with 10 starters from last year’s team, having lost only a goal keeper. The Rebels began their season on the road, stopping in Miami before visiting FGCU.

“You can tell it’s a team that came back with an entire group,” said Blankenship.
FGCU will face Dayton, a team out of Ohio on Sunday, Aug. 23 at 1 p.m., at the FGCU soccer complex.
“Teams not from Florida tend to die in this heat. We’ll get recovery tomorrow, and on Sunday, hopefully, we’ll tire them out and get a win on this field,” said Kasun.
The Flyers are returning with veterans this season, including five Preseason All-Conference honorees. Sunday’s game will be the Eagles’ first meeting with Dayton.
Delete Image
Align Left
Align Center
Align Right
Align Left
Align Center
Delete Heading