FGCU volleyball depending on returning leaders to fill position gaps 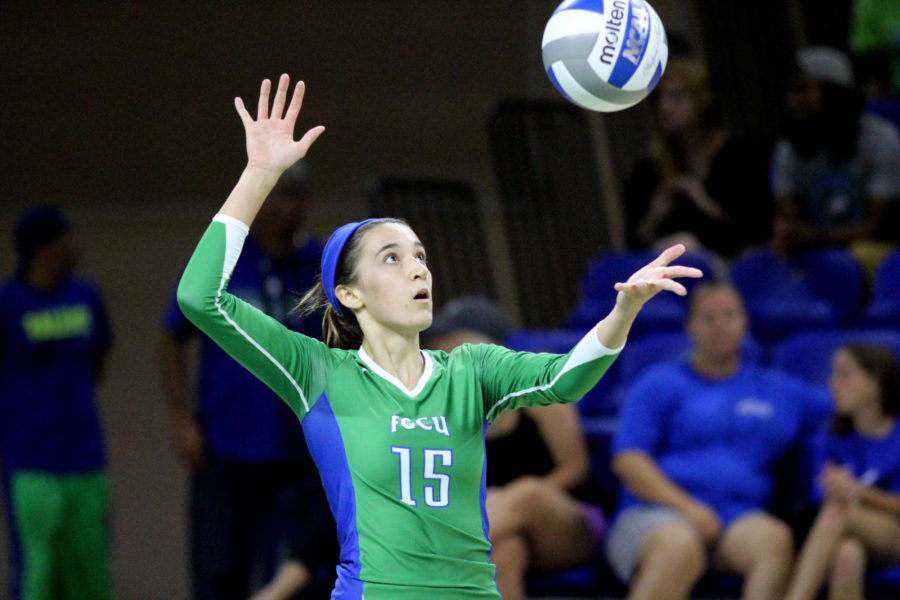 After losing four starters to graduation last spring and beginning the new season with seven newcomers on a squad of 14, the FGCU volleyball team is looking to regain its footing with its eye on the NCAA tournament.

“I don’t see why we should prolong this expectation and building of another year or two years, now is the time,” said head coach Matt Botsford. “Our athletics programs are top-notch. We need to continue, so we are always in a position to go to the tournament.”

In his first season with the Eagles, Botsford lead the Eagles to a 19-11, 11-3 conference, record in 2014. FGCU ended its season after a 3-1 loss to Jacksonville in the conference tournament semifinals.

Despite a 50 percent turnover, coaches in the Atlantic Sun Conference still selected FGCU to finish second in the conference behind reigning champion Lipscomb.

With the departure of setter Gigi Meyer, libero Whitney Masters, middle blocker Olivia Mesner and outside hitter Jessica Barnes, the team will look to returning players to take on more versatile roles.

“I think we’re lucky enough to be in a position where we are able to fill those voids with talented, high-caliber players,” Botsford said. “They’re going to have to produce out on the floor, but based on what I’ve seen at practice, I have every belief that that’s what is going to happen.”

Without Meyer, Botsford will have to select a replacement between the team’s only two setters, College of Central Florida transfer Marina Adami and freshman Maggie Rick.  The roster this year has an artillery of six outside hitters and four middle blockers.

Allen, an A-Sun Conference All-Freshmen team member last season, entered the starting lineup to fill the void created by an injury to Benke, who suffered season-ending ACL tear last September.  Allen finished fifth on the team with 130 kills, produced 11 kills on three different occasions and recorded 200 digs in the season.

“Her versatility is extremely important to us,” Botsford said. “So far in this preseason alone, she has trained as a libero, as a middle, as a left side and as a right side. So, we expect an awful lot out of her, but she has an open mind to it.”

After recovering from her injury, Benke spent her summer training as both a libero and an outside hitter.

“We’re looking at her to fill any position she can,” Botsford said. “The more we spread her out and the more we train her in those rolls, the even more valuable that she’ll be than she already is. We want to put her in a position where we can take advantage of her skill set.”

In the preseason polls, Kazarian, an outside hitter, was the only unanimous selection to the all-conference team.  The 5-foot-11 Georgia native was a valuable member on the attack, finishing third in the conference in both kills (402) and kills per set (3.44).

Benke, who is one of two seniors this year along with Eleonora Kazarian, will take on the leadership role this season as the team captain.

“I have a lot of responsibility this year,” Benke said, “not just on the court but making sure that everyone is good together, since we have like seven newcomers. I need to make sure they are comfortable for everybody and help them with the transition between high school and college. I like the challenge. I like the responsibility. I think I work better when I have big things to accomplish.”

“We’ve just been trying to do whatever we have to do,” Allen said. “At beginning of practice, I was practicing as a middle. Then, at the end, I’m a libero. Whatever coach asks us to do, that’s what’s good about this team.”

FGCU will open its season at 6 p.m Friday night against New Orleans when the Eagles host the annual FGCU Hilton Garden Inn / Homewood Suites Classic. On Saturday, FGCU will face Fordham and Presbyterian College to finish the opening weekend.

With season quickly approaching, the new starting positions will be decided soon.

“No matter where I’m playing, I just want to play,” Benke said. “It doesn’t matter.”