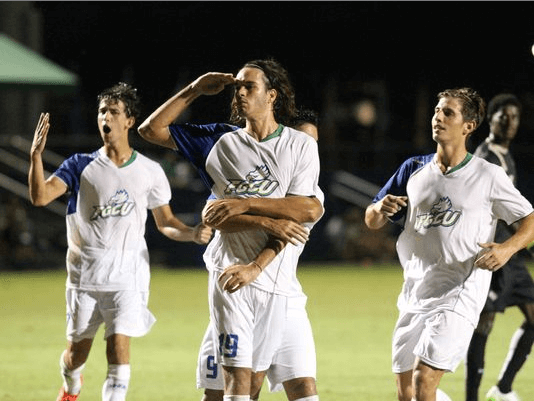 FGCU didn’t allow a single goal from the nation’s third-best team and highest-ranked opponent in program history on Friday.
The scoreless draw with No. 3 Georgetown proved that they could keep up with anyone after the rankings updated, Monday.
“When you tie with the No. 3 team in the country, technically it means that you’re just as good as the No. 3 team,” said Nathan Ingham, FGCU’s starting goalkeeper. “We just proved that we can play with any team in the country,” Ingham said.
Ingham broke the program’s all-time shutout record with his 20th career shutout at game Friday night.
Despite starting off the season with a scoreless draw against No. 3 Georgetown, FGCU proved itself as a quality Division I soccer program that can keep up with decade-old programs. TopDrawerSoccer.com announced its new rankings Monday morning, tabbing FGCU as the No. 19 team in the nation.
FGCU’s No. 19 ranking, moves them into the top 25 from the previous week’s No. 29 ranking. The Hoyas beat the reigning national champions, Virginia, 4-0 the week before, dropped to No. 4 in the poll.
“It’s certainly nice for the guys to be recognized and is great for our program and the Atlantic Sun Conference,” said FGCU head coach Bob Butehorn. “We’re definitely excited for the challenging season ahead, especially our next game at home against UCF on Wednesday night.”
FGCU will look to continue its season when we take on instate rival UCF Wednesday night at 7 p.m.