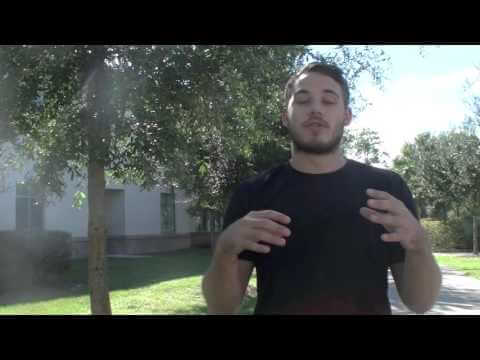 It was on the almost 20-hour car ride home to Toronto this summer when FGCU senior Dillon Duprey came up with an idea how to connect everyone on campus.
“I remember getting a lot of text messages throughout the year from friends, coworkers and teammates looking for something to do,” Duprey said. “They’re looking for people to play a pickup game, or they’re trying to find a party, or what sororities and fraternities are doing, or what bars are hosting events throughout the area.”
“Why don’t we have one place where you can find everything?” the 22-year-old FGCU D-II hockey forward thought to himself.
With that idea, Duprey and teammate Mike Reed created Vibe, a college student-focused app that acts as a bulletin board posting anything and everything going on near FGCU.
“People who are on campus and want do something can hop on the app and can see what’s going on,” Duprey said. “It’s a way to find out everything going on near and on campus.”
Vibe uses the users location to post to specific pools of users, similar to apps such as Yik Yak or Tinder, and allows users to see “vibes” in the area. Vibes can range from pickup sports games to social events, to study groups and bar college nights or Greek events.
Vibe users can customize their notifications by selecting which “cliques” they want to be a part of; that way they will only receive vibes specific to their interests. The app also allows users to message friends to discuss vibe details, send invites and stay in touch afterward.
“Vibe is a great platform where students, clubs and businesses can all intermingle and benefit from one another’s use of the app’s forum,” Reed said. “We want to bolster participation on and around campus by tossing and joining vibes relating to sports, club activities, social events, study groups and more.”
The app, which officially launched Oct. 1, is available at schools across the state in addition to FGCU: Central Florida, Florida International, Florida, Florida State, Florida Southwestern, University of Miami, University of Tampa and Florida Atlantic.
Three out-of-state schools have the app: Michigan, Indiana University and Penn State.
“We’re hoping to have a location at every school across the country,” Duprey said.
For being just a week old, Duprey says they’ve seen an encouraging amount of downloads so far, prior to launching their marketing campaign.
At the end of October, Vibe will be hosting a launch party at an unannounced location where attendees can participate in bubble soccer, slip and slide, giant beer pong, mini putt and more. Vibe will be announcing details exclusively on its app in the weeks leading up to the event.
“We haven’t really had too many big events that really united the whole campus into one awesome party,” Duprey said. “It’ll just be a time for everyone to come together and have a good time.”
Vibe will also be hosting other events such as a volleyball tournament and basketball tournament later this semester.
Vibe is free for both Apple and Android devices on the App Store or at tossavibe.com.