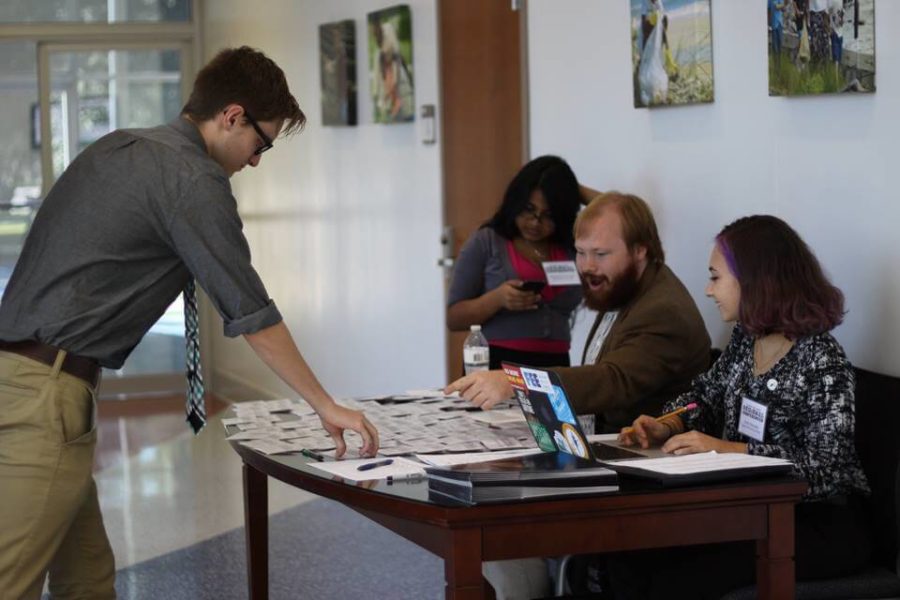 Students for Liberty volunteers Keegan Connolly and Emily Reynolds help conference attendees sign in at the University of Florida in September. Special to Eagle News.

What do attorneys, radio show hosts and think-tank employees do for fun on a Saturday? If they are guest speakers for Students for Liberty, they might be speaking at FGCU’s inaugural SFL regional conference. FGCU students and the Southwest Florida community will be given the chance to hear four speakers discuss topics including police accountability, entrepreneurship and innovation from 10:30 a.m. to 7:30 p.m. Nov. 7.
Emily Reynolds, an FGCU economics major, the campus coordinator for SFL and president of FGCU’s Eagles for Liberty, says this conference is evidence that FGCU is a growing university.
“It’s a big deal, because Students for Liberty hosts a couple dozen of these conferences every year and this is the first year they’ll be hosting two in Florida,” Reynolds said. “They’ve noticed that they have a lot of student groups, and I think Florida is the state with the highest number of student activists for SFL.”
Not only is this the first time SFL will hold two conferences in Florida in one year, but this is also the first time a Florida university other than UF will host the conference. Reynolds attributes this to the engagement of E4L members.
“I think traditionally Gainesville, FSU and FGCU have brought the biggest groups to the regional conferences in Gainesville,” Reynolds said. E4L has 15 to 18 active members and has hosted speaker events attended by almost 100 people.
Reynolds, who attended the Gainesville SFL conference in September, is particularly excited to see journalist Bill Frezza speak.
“He was at the Gainesville conference, and I didn’t get to see him,” Reynolds said. “I asked a lot of people who their favorite was, and a lot of people chose him.”
The other three speakers are Justin Pearson, an attorney for the Institute for Justice; Adrian Moore, vice president of policy at the Reason Foundation; and Zachary Slayback, a business development director at Praxis.
Students who attend the conference will also have the opportunity to opt into the Campus Speech Code Revision Workshop taking place Nov. 8.  The workshop will be hosted by the Foundation for Individual Rights in Education and Young Voices. In 2007, FIRE gave FGCU a red rating, its worst rating for campus speech policies. According to thefire.org, the rating was given for FGCU’s use of “unclear and overly broad terms” in its non-discrimination policy, which at the time forbid “expressions deemed inappropriate.”
FGCU has since revised that policy but maintains its red rating for Email Policy 3.021, which warns that using the university email system for content “that is defamatory such as, but not limited to, racially or sexually charged messages, jokes or cartoons” could lead to disciplinary action including termination of employment.
The goal of the workshop is to teach students how to start a group to focus on getting the university a green rating for its speech code.
One of the things Reynolds appreciates about SFL is how empowering it is toward students.
“It’s not a chapter-based organization, so it’s very bottom-up attribution. We kind of do whatever we want, they’re not a parent organization. It is completely run by students. For the most part, it’s students who are in charge of everything.”
SFL is funding the conference and speakers are appearing for free. Reynolds and the vicepresident of E4L, Lynanne Lowry, are both campus coordinators for SFL.
Coffee, lunch, dinner and two alcoholic beverages at the House of Brews after-social will be provided to attendees. Students who attend the conference should dress in business attire because there will be networking opportunities throughout the day, and plan to arrive at Ben Hill Griffin Hall, room 109, at 10 a.m. to sign in the conference.
Reynolds says the event will be a great opportunity for students to “meet other liberty-loving students.”
Students can sign up for the conference for free at the official website.