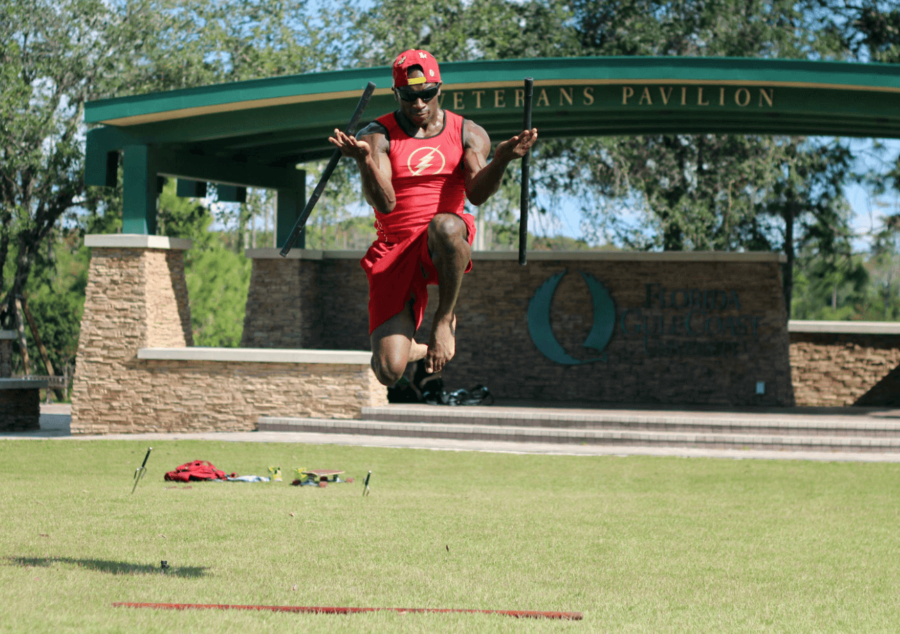 After getting cut from the FGCU basketball team tryouts two consecutive years, Jordan Brown decided to trade the ball for nunchucks. He then decided he would become a ninja.

Brown, a senior majoring in criminal justice, is training to compete on NBC’s “American Ninja Warrior.”

“I was thinking, ‘God what do you want me to do with my life?’ ‘How can I be able to inspire people?’” Brown said.

Brown has come a long way since he bought his first pair of nunchucks on eBay last spring. He bought a variety of weapons and started using them to jump and exercise.

Brown realized he could use the skills and strengths he had developed from basketball practice and from ninja training and apply them to reach a different goal. He abandoned the idea of playing for the Dunk City Eagles and decided he wanted to compete in ANW.

Nowadays, he is not only a ninja but he goes by the alias “Flash,” and it is not only because it’s his favorite television show. He was nicknamed “Flash” because he likes to do things fast, especially ride his longboard. Since he was nicknamed, he dresses like the superhero.

“As a Christian, it means I want to be a light in the dark world,” Brown said. “I like dressing like Flash because of the symbol of the lighting bolt — it’s like the light and then the circle is all dark. It reminds I want to inspire people to not give up on what they want to do and to show people about my savior, Jesus Christ.”

To pursue the dream of participating in ANW, Brown trains on a daily basis using different weapons.

“I wake up every morning, I read my Bible to remind myself that I’m doing this for God and not for people,” Brown said. “Then, I start on my workouts.”

The weapons he uses to train are nunchucks, a bo staff, sai, escrima sticks, throwing stars, a bow and arrow and throwing knives. He also practices parkour, rock climbing, martial arts and gymnastics.

He does the majority of his training in the Veterans Pavilion at FGCU. For instance, he uses the ledges on the walls to gain strength on his forearms by hanging from his fingertips and swinging his body back and forth. He also goes to downtown Fort Myers to practice his devil steps and to a gym called Extreme Air to practices his gymnastics.

Brown is training for the official tryouts for season eight of “American Ninja Warrior” in Florida. Although these official tryouts won’t take place until May 2016, Brown has already submitted a video of himself in action that he needed in order to apply.

The event will be held from 7 to 9 p.m. Saturday, Nov. 7, in a ninja lounge in North Miami, and it will consist of 40 men and 40 women competing in separate categories.

If Brown makes it all the way through the championship and wins the $10,000 in the male category, he plans to donate a part of it to the FGCU Chi Alpha Church to help with its mission trips. He would give another part of the award to his cousin Alex, who goes to a community college in Miami but wants to attend FGCU. Brown said he would save the last part of the award.

“I would use the rest of it to save for my future after college because I want to open an official gym to provide an opportunity to kids who want to train like me,” Brown said.

Brown believes the UNAA competition will prepare him for the ANW tryouts. He said the hardest part of practicing this sport is the mental part to it.

“I know physically I can do it, it’s just mentally I have to tell myself, ‘I can do this,’” Brown said.