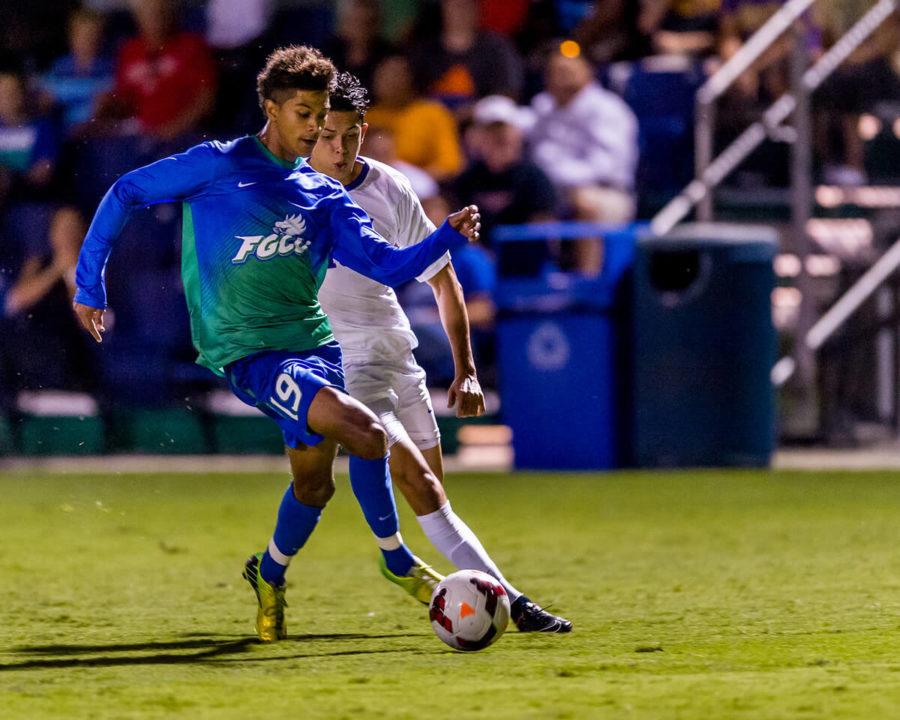 With the Atlantic Sun Conference Tournament beginning tonight, the A-Sun announced its postseason award winners on Wednesday night.
FGCU’s Rodrigo Saravia took home the A-Sun player of the year award. This is the first time in program history, that a player receives this honor. Saravia was the engine that kept the green and blue midfield running, contributing on the offensive side of the ball with three assist, as well as on the defensive side contributing to the Eagles’ 0.66 goals against average. Saravia was also named to the A-Sun First Team All-Conference for his second consecutive season.
Another member of the A-Sun First Team All-Conference, Aaron Guillen, received A-Sun Defensive Player of the Year. Guillen is now the second FGCU player to win this award in A-Sun history. Guillen was a defensive anchor for the Eagles this season, starting all 13 games for the Eagles. Guillen was the captain of the Eagles’ backline that recorded seven shutouts, allowed only nine goals and had a 0.66 goals against average.
The A-Sun career shutout leader Nathan Ingham received his first ever Goalkeeper of the Year honor. Ingham who was also elected to the A-Sun First Team All-Conference, led the A-Sun in multiple categories with seven shutouts, goals against average with 0.44 average. Ingham became the A-Sun career shutout leader this season with 26 shutouts.
The A-Sun regular season title wasn’t the only thing the Eagles and the UNF Ospreys shared this season. FGCU Coach Bob Butehorn and UNF coach Derek Marinatos shared the Coach of the Year award. This is Butehorn’s third time winning this award after leading the team to an A-Sun regular-season title and No.1 seed in the A-Sun tournament.
Joining Ingham, Saravia and Guillen in the A-Sun First Team All-Conference was forward Albert Ruiz. Ruiz was the leading scorer for the Eagles, tallying 6 goals on the season and going 5-5 in shots from the spot.
Representing the Eagles in the All-Atlantic Sun Second team were Miguel Jaime and Dylan Sacramento. Jaime, who was selected Atlantic Sun All- Academic Team, scored two goals and had two assist on the year. Sacramento, who you might recognize from his No.7 play on SportsCenter’s top 10, scored 6 goals in his debut season for the Eagles. Sacramento wasn’t the leading scorer for the Eagles due to Ruiz’s one assist.
The two Eagles selected to the All-Atlantic Sun Freshmen Team were Dennis Zapata and Preston Kilwien. Zapata started all 13 games for the Eagles in his freshmen season, tallying one assist. Kilwien scored a game winning goal from 30 yards, and it landed him the No.1 play on SportsCenter’s Top 10. Kilwien played 7 games for the Eagles this season.
The Eagles will now await the winner of the quarter-final match between No. 4 USC Upstate vs No. 5 Jacksonville. The Eagles play the winner of that matchup in the tournament semifinalSaturday, Nov.7 at the FGCU Soccer Complex.