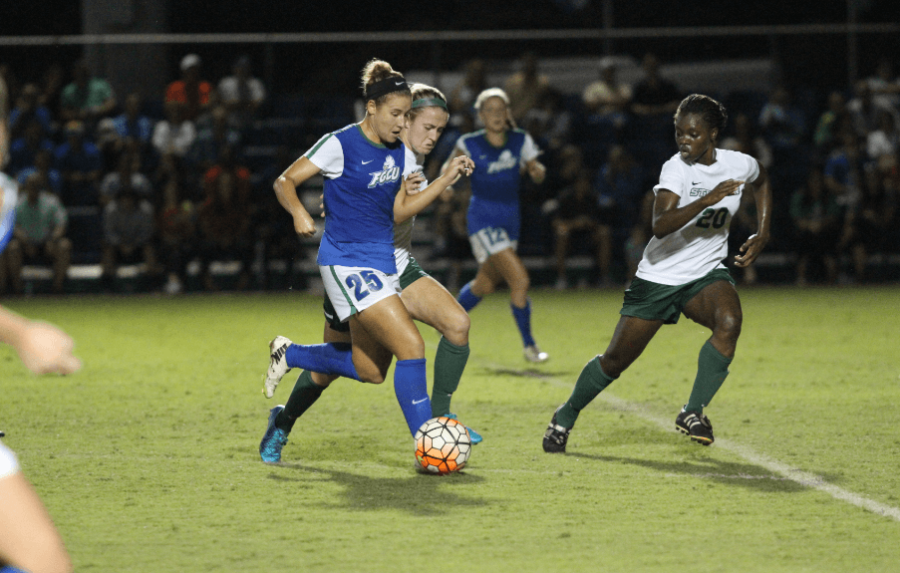 The top seeded FGCU women’s soccer team took on A-Sun, Florida rival Stetson Friday  in a post-season battle at the FGCU soccer complex.
The Eagles flew away with the game, winning 5-0 and extending their win streak to 7-0.
The last time the teams played, the Eagles took a five-point differential win over the Hatters, leaving DeLand with a 6-1 win.
The first goal of the night came from FGCU defender Shea Rhoney, who scored her third goal of the season at the ten minute mark off a penalty kick, setting the Eagles up for success early on.
The Eagles offense was full of energy during the first half, maintaining possession for the majority of the time. Midfielder Ally Kasun set the pace of the game, pushing the Hatter’s defense to close the same gaps the Eagles took advantage of early on.
“The energy was great,” Kasun said. “It was expected, now that we’re in the tournament.”
The second goal of the night came from defender Ali Rogers, also scoring her third goal of the season.
At the end of the first half, FGCU took a total of 11 shots.
Throughout the half, defenders hung out on the offensive side, leaving FGCU goalkeeper Brittany Brown alone on the defensive end. Stetson goalkeeper Janina Scharnbacher was forced to save 9 of the 14 shots made on her goal.
In the second half, the Hatters came out of the gate running, only to be answered by strong Eagle offense. A third goal by FGCU midfielder Meaghan Mulligan in the 56th minute of play, a fourth goal by forward Tabby Tindell in the 72nd minute of play and a fifth goal in the 82nd minute of play by freshman defender Shea Jackson wrapped up the second half.
“The second half gave us a chance to regroup a little bit,” Kasun said. “Although we might have given up more shots in the second half, we were more of a unit.”
“I liked the way we played,” head coach Jim Blankenship said. “There was good energy and good pressure.”
The Eagles advance to the A-Sun Championship on Sunday, Nov. 8 to face No. 2 Lipscomb at the FGCU soccer complex. Lipscomb came behind FGCU in the seedings by a single point.
“They always give us a hard match,” Kasun said. “Their goalie is great. It’s going to be crucial that we finish the ball.”
“They’re athletic; they press; they’re very organized,” Blankenship said. “We have a ton of respect for them but we’re coming for them.”
The winner of Sunday’s match will determine the winner of the A-Sun conference and to the team that advances to the NCAA tournament.