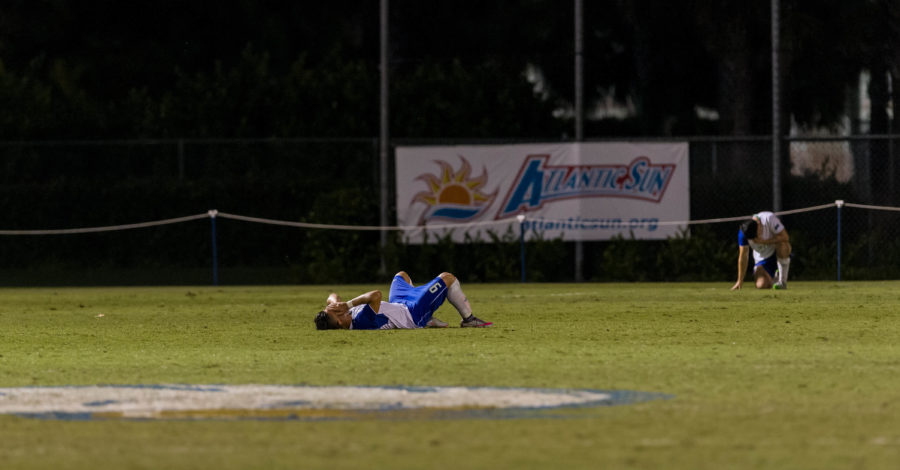 The FGCU men’s soccer team’s season has come to a close.
USC Upstate advanced to the A-Sun championship final for the first time in school history over FGCU Saturday night with a 4-3 overtime  win in Fort Myers.
USC Upstate, just a month after the loss of four Spartan student-athletes, two of which were men’s soccer players, in a deadly car crash just miles from the university, scored more goals against FGCU in the A-Sun semifinal than they have in their entire history.
“I saw afterwards some kids get emotional that not normally would’ve done that,” said head coach Greg Hooks of USC Upstate. “As coaches we don’t ever say ‘Go win it for them’ because what happened in that accident is so much bigger than a soccer game. We try to separate it. For the players, when you’re tired and fatigued, I’m sure that there was some inspiration from it.”


In the two school’s seven-year history competing together, Upstate has only scored two goals against FGCU, which both came from a double-overtime game between the two schools in 2008.
Upstate scored four on Saturday night.
“I couldn’t be happier for a team that’s not mine,” FGCU head coach Bob Butehorn said. “They were playing so inspired, and I think we had an answer to everything that they threw at us. I give a lot of credit to Upstate.”
Last month, a car crash claimed the lives of five Upstate students.
Men’s soccer players James Campbell, 21, from Greenville, South Carolina; Horace Sproull IV (Mills), 20, from Birmingham; cross country runner Joshua Lee, 20, from Glendale, South Carolina; and tennis player Sarah Vande Berg, 21, of Zephyrhills were victims of the crash.
Saturday night’s game comes after another overtime win for the Spartans in the quarterfinal against Jacksonville Thursday night, which gave the program its most wins in a single season, surpassing the team that went 5-9-3 in 2009.
The first goal of the game was delivered by FGCU senior Skylar Wilks with his fifth of the season in the 10th minute off of a pass into the box from Dylan Sacramento. Following every goal, Upstate immediately answered with a goal of its own.
USC Upstate quickly evened the score 16 minutes later when Upstate’s Lukas Sommer gained the advantage on a deflected cross and took a shot on an open net, evening the match at one.
With the score tied at one, FGCU forward Albert Ruiz put the Eagles ahead again with a goal off a pass into the box from Wilks in the 67th minute. Ruiz immediately after was given a yellow card for removing his shirt in celebration.

Upstate quickly answered five minutes later with a ball chipped over FGCU defenders and Upstate’s Gordon Wild finishing in the left side of the net.
In the 79th minute, a frustrated Ruiz chipped the ball into the box hoping to set up FGCU’s David Robledo for a goal to break the tie. USC Upstate goalkeeper Hassan Haddad attempted to punch the ball out of the box, but it resulted in punching it into the chest of FGCU’s David Robledo, flipping him and the ball into the back of the net.
With three minutes left in the game, a cross from the left gave Leon Schwarzer the opportunity to put the ball in the back left corner, tying the game again.
After 90 minutes of play, the two teams were tied, 3-3 in the A-Sun semifinals. The two teams were in golden goal overtime.
Upstate’s Michelangelo Dovidio advanced the Spartans to the A-Sun Championship with a golden goal from the top of the box in the 97th minute.

“We’re fortunate, but it’s probably just as much hard work and perseverance as it was anything else,” Hooks said. “To give credit where it’s due, FGCU is the team of the conference in terms of ability and difficulty because they’re so good in every position and so well coached.”
FGCU, who was seeking their fourth conference championship in five years, finishes its season with a 7-3-3 overall record and 4-0-1 in the A-Sun. The top-seeded FGCU, who received its highest ranking of the season at No. 19 in the nation and finished with an RPI of 31, shared the conference regular season title with North Florida, who defeated Lipscomb. FGCU holds an RPI of 31.
Collegiate soccer careers ended for FGCU captain Aaron Guillen, Skylar Wilks, Steven Oliveri, Rodrigo Saravia, Luis Vega and career shutout program leader goalkeeper Nathan Ingham.
“I’m sad for the boys – especially the seniors – but that’s the game,” Butehorn said. “They raised the level of the entire conference and took themselves to a spot where we expected a lot out of them.”
No. 4 USC Upstate will advance to its first A-Sun championship on Saturday against North Florida in Jacksonville.