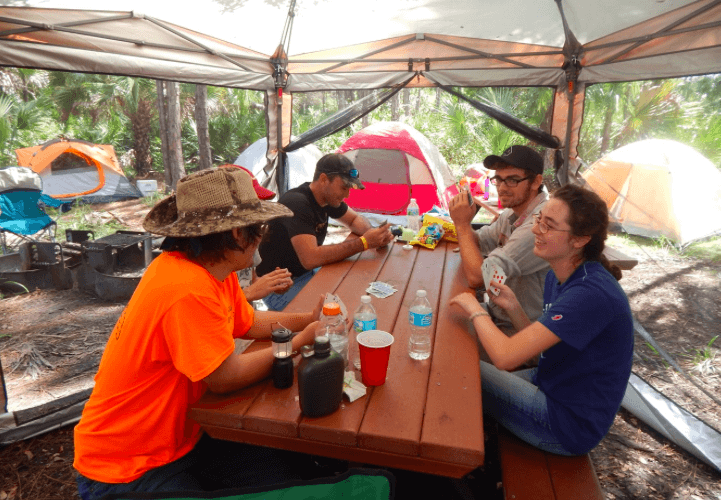 The FGCU Wildlife Club at a camping trip in 2014. Special to Eagle News.

FGCU’s Wildlife Club, a student organization dedicated to giving members research experience, will be holding a fundraiser 6 to 10 p.m. Monday, Nov. 16, in the Cohen Center Ballroom to help its sister club, located at a school in Ghana, start up its own food forest.
With a minimum donation of $2 at the door, attendees will watch a screening of the documentary “Call of the Ancient Mariner,” a film focused on the cultural significance of sea turtles. Following the screening, a silent auction will be held, along with a discussion panel with local wildlife experts.
Extensive planning went into bringing this event to life. Krueger and the rest of the officers of Wildlife Club held specific meetings, talked to the dean of the College of Arts and Sciences, contacted panel speakers and advertised for the event.
“Club members worked long hours advertising around the community and collecting silent auction items,” club president Erica Krueger said. “Other RSOs, such as Food Forest, SCUBA Club, Rotaract, DROP and EcoFGCU, have also assisted with advertising and collecting silent auction items.”
This event is one of many planned for Wildlife Club members this semester. Krueger plans on bringing in speakers to give members presentations every month, taking a day trip to the Mote Marine Lab located in Sarasota, several different service learning opportunities, a camping trip at Bahia Honda State Park in Big Pine Key, as well as attending the Southeastern Ecology and Evolution Conference in Tallahassee this coming March.
The experts who will serve on the discussion panel include Dave Addison, a senior biologist from the Conservancy of Southwest Florida; Kristen Mazzarella, a biologist from the Mote Marine Lab; and Phil Allman, a biology professor with the university.
All donations made during the event will be sent to the educational institution in Ghana. The Wildlife Club has worked with its sister club previously, with students assisting with cleanups and restoration of the mangrove forests located in Ghana. Discussion panel speaker and FGCU professor Phil Allman has also worked in the area near the school, conducting research on sea turtles as well as tortoises.
“Students can gain an awareness of how they can get involved with communities around the world,” Krueger said. “We want people to have a better understanding of the cultural importance of sea turtles and to form a connection to the food forest that our sister club is planning to build in Ghana.”