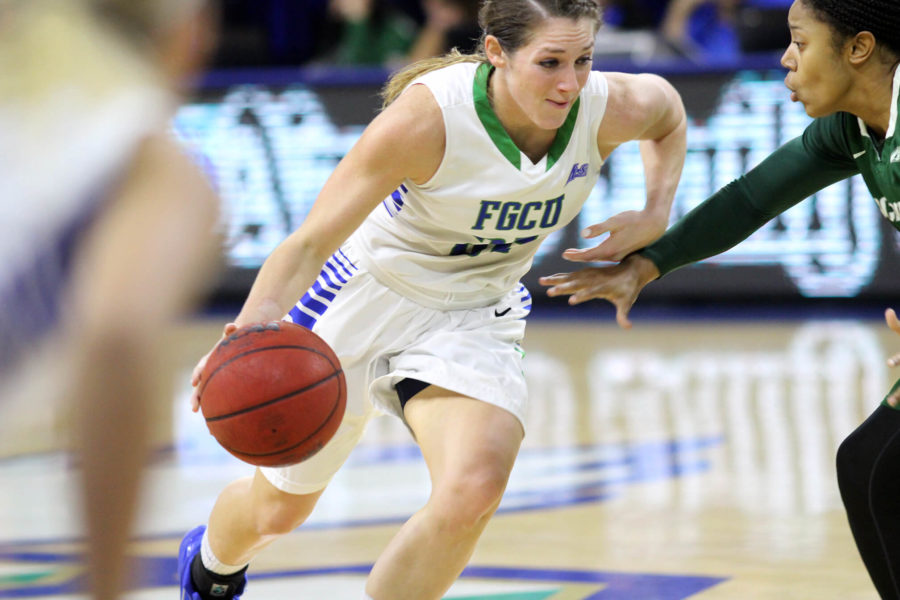 Although she may have shot her last 3-pointer for FGCU, Jenna Cobb isn’t off the court yet.
The former FGCU women’s basketball captain returns to the team this year as the coordinator of operations. In her position, Cobb handles travel, food, accommodations, budgeting and various other responsibilities.
“I’m very thankful to be back and still have the opportunity to be a part of this program,” Cobb said.
Cobb, who led the Eagles to their first NCAA tournament win last season over Oklahoma State, a program-best No. 21 national ranking and a perfect conference season, played a cognitive role on the team.
Last season, Cobb averaged 8.2 points and 3.9 rebounds a game while shooting 61 percent from the line in 34 games.
Cobb will join other FGCU women’s basketball alumni on the coaching staff: Associate Head Coach Chelsea Dermyer (2005-08), Assistant Coach Chelsea Lyles (2008-10), and Joyce Iamstrong (2011- 13).
“It’s been a different transition for me,” Cobb said “I’ve always been playing basketball and on the court since second grade and this year I’m not so it’s different but I’m happy to be on the other side of things and apart of the game.”
Cobb, who originally was hired for the video operations coordinator position, was moved to her new position after former Director of Operations, Scott Richardson left the program.
“With video coordinating, I had to learn a lot in the first two months, and now I’m having to learn a whole lot more,” Cobb said. “I’m thankful that I’m getting to learn different positions right out of playing because it’s just going to help me moving forward that I’m going to know how to do video and ops and stuff like that.”
Last season, Cobb was one of 55 nominees from all divisions to be selected to the Women’s Basketball Coaches’ Association’s “So You Want to Be a Coach” Class of 2015.
Cobb, who has plans to pursue a career in coaching after college, attended the three-day workshop at the NCAA Final Four in Tampa in April.
“I want to coach,” Cobb said. “I’ve wanted to do it my whole life and stay apart of the game. That’s my end goal.”
The WBCA program aims to give insight to potential future coaches in the world of securing  a women’s basketball coaching position and succeeding in that position by teaching about recruiting, the administrative side of coaching, how to get hired, skill development, the importance of rules and how to balance work and life.
The program also provided networking opportunities for players, connecting potential coaches with current coaches and administrators.
But could she ever be FGCU coach Karl Smesko?
“I don’t know if I could ever be ‘a Smesko,’” Cobb joked of her former coach and new boss. “He’s a genius and amazing at what he does.”