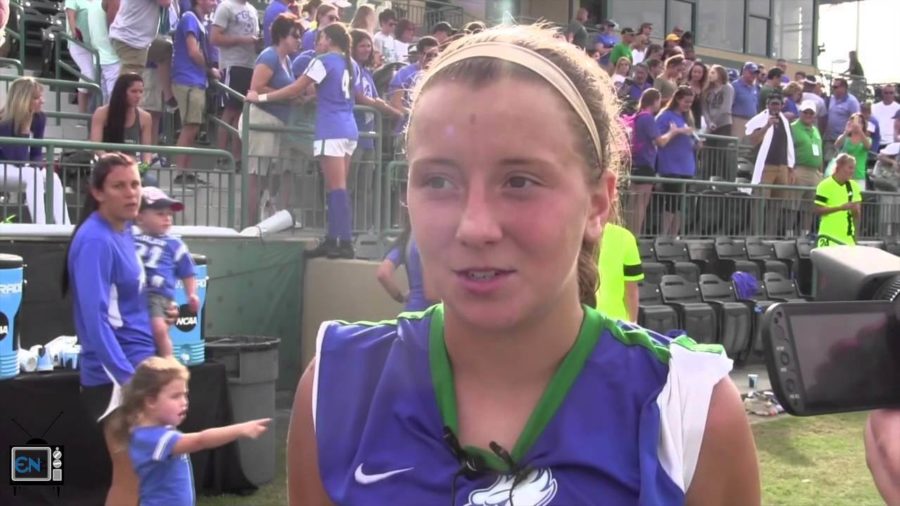 // TAMPA — Winning an NCAA game has been a dream that the FGCU women’s soccer team’s seniors have had since they were freshman.
On Saturday, they did it.
“Before I graduated, I had three goals,” senior Ally Kasun said. “To beat Florida, to beat UCF and to win a game in the NCAA tournament. Thank god by my senior season we did all three this year.”
FGCU defeated Florida in a preseason exhibition game in August, earning a one-goal shutout over UF in Gainesville.


In the same weekend, the Eagles defeated UCF 2-1 in Orlando.
Check.
FGCU earned its first-ever NCAA win Saturday afternoon against No. 22 USF with a 2-1 decision in Tampa.
Check.
“It was meant to be,” said FGCU head coach Jim Blankenship. “I’m so proud of the kids; they deserved this moment – of course they had to work very hard for this.”
In its three years of NCAA participation, the women’s soccer team has never scored a goal in an NCAA game. On Saturday afternoon they scored three.
Just two minutes into the game, the Bulls put the first points on the board with an own goal by FGCU players.
The Eagles quickly answered in the fifth minute when FGCU senior Shea Rhoney tied the game, scoring the program’s first-ever goal in an NCAA game, off of a penalty kick. The Eagles scored again in the 36th minute off of another penalty kick, a yellow card was given to USF’s Allie Rossie. The foul set up Paulina Speckmaier to make another successful penalty kick to put the Eagles ahead at 2-1.
Despite being outshot by the Bulls, 22-11, FGCU managed to maintain its one-goal lead to win the game.
“Before the game, I said that we were going to find out a lot about us in the first eight minutes,” Blankenship said. “I told them at half time, I said ‘You know what I found out? I found out that you guys can win this, you’re fighters.’ We’re battle-tested; we’ve been everywhere.”
FGCU will advance to the second round to play against No. 13 Duke in Gainesville at 3 p.m. on Friday, Nov. 20. Blankenship said he had to turn the TV off while watching the Blue Devils defeat James Madison Friday night with a five-goal shutout in Durham, North Carolina.

“It gets harder,” Blankenship said. “I don’t think there are any bad teams left, though. But, you know, anything can happen.”
Going into the game with a 14-5-2 record, on a high with their first win under their belt the Eagles are confident that they can keep up with a No. 3 seeded Duke.
“We got to keep fighting and being the little dog in the fight,” said FGCU goalkeeper Brittany Brown, who fended off 22 USF shots, forcing five saves Saturday. “As he always says, ‘It’s not the size of the dog in the fight, it’s the size of the fight in the dog.’”
This season, FGCU kept No. 4 West Virginia within one goal and defeated Wake Forest, 2-1 in the regular season. Duke enters Friday’s game with an 11-5-4 record and 27-18-8 in NCAA tournament play.
Saturday was FGCU’s fourth year in the NCAA tournament, earning bids in 2011, 2012, 2014 and 2015. The Eagles were shutout by Florida in Gainesville in both 2011 (3-0) and 2012 (2-0). Last year, FGCU hosted Auburn, falling 1-0 after losing Tindell in the first 10 minutes.
“We’re getting closer and closer every year,” Blankenship said. “We’ve been so close so many times. Why not us?”
Delete Image
Align Left
Align Center
Align Right
Align Left
Align Center
Delete Heading