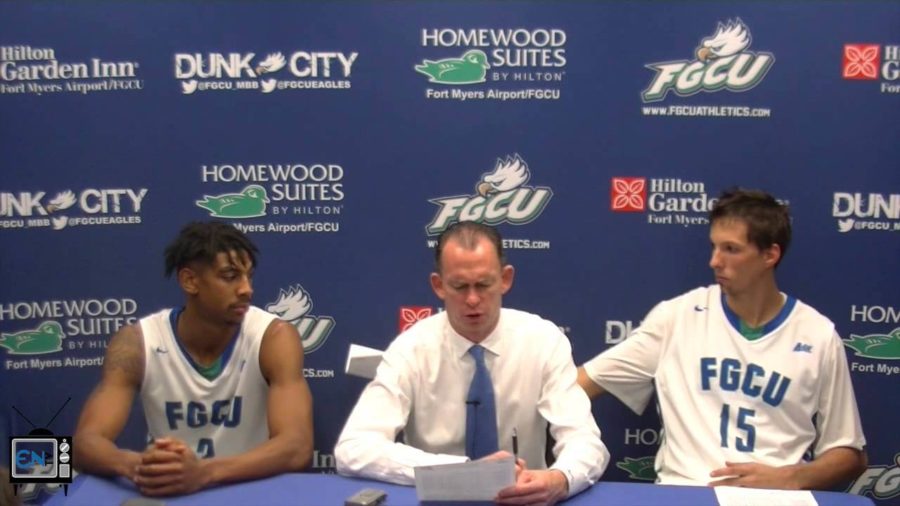 Electrifying is the only way to describe the FGCU men’s basketball home opener. There were nearly 4,000 people in attendance. Once the ball tipped off, you could hear the screams of excitement coming from all over the gym as anxious fans awaited their Eagles to dominate the opponent.
There was a good number of commendable performances from the starters and from the bench. Marc-Eddy Norelia had a commanding performance. He was a force inside the block with 15 points and 11 rebounds. Julian DeBose also had a solid game with 14 points, five rebounds and three assists. However, the showstopper for the evening was senior Filip Cvjeticanin.
Cvjeticanin was constantly letting them fly from deep and had 18 points with 6-12 from three-point range, while Christian Terrell had 11 points coming off the bench.
The story of this game was lockdown defense and fast-paced offense. FGCU took the lead and never looked back. The team shot 48 percent from the field over the course of the game. During the first half, FGCU went on a 21-3 tear. This gave the Eagles a 12-point lead going into the half.
During the second half, the Eagles came out the gate firing by making 4 of their first 5 shots. During the game, the referees were a little trigger happy with the whistle, which led to the Eagles being in foul trouble early on. Rayjon Tucker and Kevin Mickle fouled out but did contribute during the course of the game. Tucker had a poster slam on the fast break and Mickle was a force on the boards with six rebounds.
As a team, free throws were a problem. The Eagles shot 58 percent from the charity stripe. On top of that, the team had 19 total turnovers. On the opposite spectrum, the Eagles had 47 points in the paint and showed a knack for finding the open lane to feeding the big men down low. The Eagles also outrebounded Texas with 50 total rebounds.
All in all, this was a great way to open at home. The team showed promise on both sides of the ball. In the end, The Eagles steamrolled the Rams with a whopping 85 to 62. By the end, the Rams looked ready to stampede on home. The men have three games this coming weekend. Let’s see how they maintain the positive and energy.