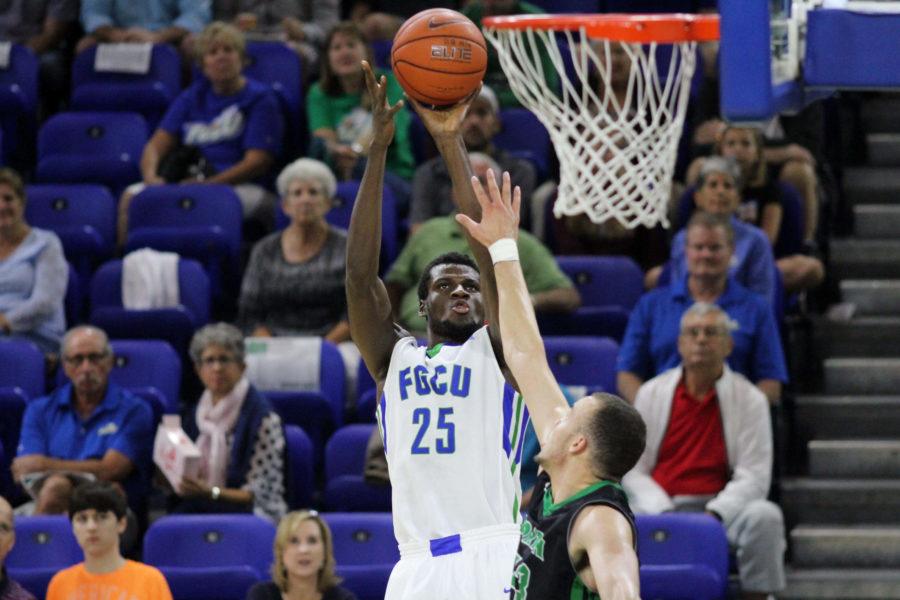 Coming off of its triple overtime 104-101 win against the Youngstown State Penguins on Saturday night, the FGCU men’s basketball team squared off against the North Dakota Fighting Hawks for the first time in program history.
In their second of three games in the Hilton Garden Inn Classic, the Eagles defeated the Fighting Hawks 73-60 on Sunday, Nov. 22.


After being ruled out three to four months with a stress fracture in his right shin, forward Demetris Morant played his first game of the season. Morant wasn’t expected to play until the end of December, but after sitting out for eight weeks, Morant played 12 minutes against the Fighting Hawks.
“I didn’t even know I was going to play today,” Morant said. “They told me yesterday it was up to me, and I gave it a shot. I was very tired, but my leg felt great. I can’t wait to get back in shape and actually go for real.”
After his 18-point, nine-assist effort in the triple OT victory against the Penguins, freshmen Reggie Reid was given the nod to start the first game of his collegiate career by FGCU Head Coach Joe Dooley. After picking up two quick fouls that kept him out of the first half, Reid made up for it, ending the game with nine assists for the second consecutive game, including six points and a couple of lobs to Marc-Eddy Norelia.
Leading the way for the Eagles, with his third double-double in the last four games, 18 points and 10 rebounds, was Norelia, along with Antravious Simmons’ 12 points and 11 from Christian Terell.
In the first half, the Eagles shot 34.5 percent from the field, 25 percent from long range and 50 percent from the stripe.
Nine minutes into the first half, gold medalist Julian Debose began limping on both sides of the floor. Four minutes later, Debose returned to action and appeared to be OK. Three minutes later, after going 0-4 from the field and knocking down one free throw, Debose would not return to the game after hurting his ankle.
The Eagles were able to limit the Hawks to 33.3 percent from the field and go into halftime down 31-28.
After a rough first half, the Eagles turned it around with an offensive resurgence, which began with an and-one when Reid was fouled while converting a layup. After a couple of lead changes, the Eagles managed to get some big stops on the other side of the floor and convert on the offensive end. Reid, a 5-foot-11-inch guard, denied the Fighting Hawks’ 6-foot-7-inch forward Conner Avants at the rim, got the ball and knocked down a triple to put the Eagles up by two with 15 minutes left to play. The Eagles led the rest of game.
Terell was hot in the second half, racking up 10 of his 11 points, and knocking down a pair of threes. Norelia was on fire in the second half and was not afraid to show it, flexing his muscles after slamming home a lob from Reid that put the 3,412 fans in attendance to their feet. After his crowd pleasing alley-oop jam, Norelia followed up with two layups, with one coming off of another oop from Reid. Reid was another driving force that led the Eagles to their second half resurgence with a block, a steal, six points and six assists.
The Eagles would finish off the game shooting 63.3 percent in the second half and 44.4 percent from long range. The team rode its improved shooting in the second half to a 73-60 victory.
“I thought we got off offensively a little shaky in the first half,” Coach Dooley said. “The ball was stuck a little. We weren’t able to move the ball from side to side, and I think we took some bad shoots. The difference in the second half is that we moved the ball a little bit better, and we got some stops defensively which really helped.”
The Eagles will now take on Bowling Green Falcons on Monday night in the last game of the Hilton Garden Inn FGCU Classic.
Delete Image
Align Left
Align Center
Align Right
Align Left
Align Center
Delete Heading