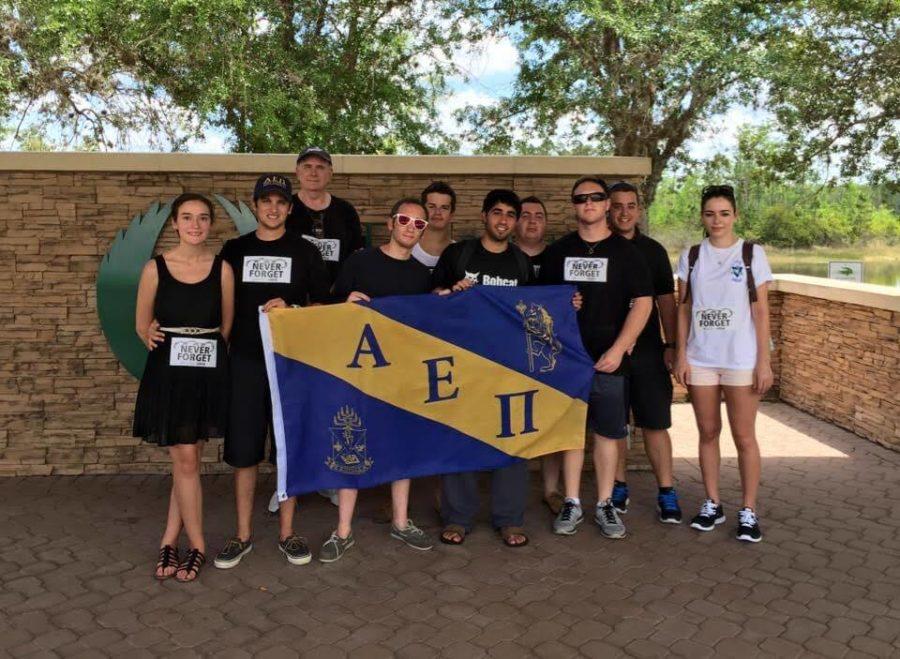 AEPi brothers after completing their first "We Walk to Remember" which honored lives lost during the Holocaust.

Alpha Epsilon Pi, a Jewish fraternity founded in 1913 at NYU , officially received its charter from the national chapter of AEPi Saturday, Nov. 21, becoming the eighth fraternity on campus.
Following the colonization of the university’s second newest, men’s Greek organization, Phi Delta Theta in 2014, AEPi can now provide Jewish students with the choice to take part in Greek life without having to stray from their religious beliefs.
“AEPi provides students with a Jewish home away from home,” said Perry Chencin, the chapter president. “This brings a different flavor to choose from, whereas many other fraternities are founded on Christian religious beliefs – ours  is Jewish. There are fraternities full of Jewish men, and there is the Jewish fraternity.”
FGCU AEPi was previously recognized as a registered student organization since its initial colonization in 2013, until being notified of its offer to become an official charter in August.
“Our charter comes from our fraternity’s national headquarters, not the school,” Chencin said. “So, in this way, we proved we could sustain good recruitment, attracted attention and raised money for our philanthropy. We laid the groundwork necessary for a long and successful future as a chapter.”
Chencin was part of a handful of founding fathers responsible for the fraternity’s colonization, and he has watched it grow into a recognized Greek organization on campus. He explained that the frat, despite its new official recognition, has been active since the beginning of the semester.
“After participating in recruitment week, we held our own recruitment events open to potential new members,” Chencin said. “As far as non-rush events go, we’ve held a couple philanthropy events, one supporting Heroes to Heroes Foundation and one supporting bone marrow research, Pie A Pi.”The organization also assisted members of the class of 2019 during Week of Welcome as well as participated in road clean-ups on its adopted stretch of road on Three Oaks Parkway.
Chencin credits FGCU administration as well as fellow members of Greek life on campus for assisting AEPi in its journey.